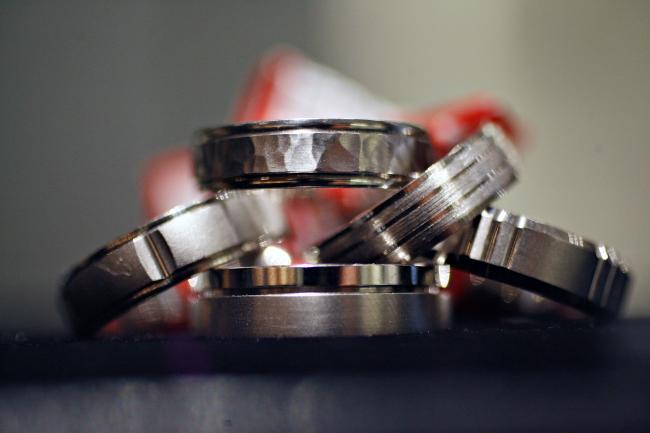 © Bloomberg. Palladium wedding bands are displayed for a photograph in a Fortunoff store in New York. Photographer: Daniel Acker/Bloomberg

(Bloomberg) — Palladium’s deficit-driven ascent has some analysts warning of the growing potential for a correction given the rapid sprint upward.

The silvery-white metal used to control harmful emissions in gasoline-fueled cars surged 40 percent in four months, hitting repeated records, as a supply deficit deepens and demand surges. It’s the top-performing raw material tracked by Bloomberg this year, and the threat of a strike by a mining union in key producer South Africa has added extra momentum this week.

Yet as palladium widens its premium over other metals — including a near-$700 gap with sister metal platinum — banks including Saxo Bank A/S and Commerzbank say gains look increasingly unsustainable. The two metals are potentially interchangeable as pollution-reducing catalysts in vehicles, although switching requires time and money spent on research.

“Palladium has entered into bubble territory,” Ole Hansen, head of commodity strategy at Saxo Bank, said by email. “But as long we see no change in the outlook for tight supply or changing demand dynamics from consumers, the price could go higher.”

Signs that palladium is starting to be driven by more traditional factors like economic data and investor sentiment raise the probability “that finally the rosy glasses are taken off and prices come back to Earth,” said Georgette Boele, coordinator of FX and precious metals strategy at ABN Amro Bank NV. “If this would happen the sell-off could be very dramatic, as prices rose at an almost exponential level. So I would say fasten your seatbelts.”

Commerzbank also issued a warning, saying the commodity “is showing more and more signs of being a bubble.” UBS Group AG strategist Joni Teves has said there’s scope for deep pullbacks even as market participants now talk about the potential for the metal’s price hitting $2,000.

Investors are due for updates on the outlook for the global market as leading producers report earnings this week.

Russia’s MMC Norilsk Nickel PJSC, which reported better-than-expected earnings Tuesday , said it’s continuing to buy the metal for a fund it uses to supply users amid expectations of further deficits. Another major producer, Impala Platinum Holdings Ltd., reports on Thursday. Shares in both miners have surged this year.

Anglo American Platinum Ltd., which last week declared its biggest dividend since 2008, said that it expects the three major platinum-group metals — including rhodium — to be in a combined deficit again in 2019, as demand from the automotive industry increases, even with little or no growth in car sales, due to expanding average vehicle size and tightening emissions rules.

More than 80 percent of palladium comes as a byproduct from nickel mining in Russia and platinum mining in South Africa, so supplies depend on the extraction level in other minerals. The viability of platinum as a substitute has also been downplayed — research has shown that technological advances are needed before it can match the performance of palladium-based catalytic converters, according to Johnson Matthey Plc, which makes the devices.

“End-users and traders will be increasingly concerned about supply. Importantly, palladium’s rise has less to do with short-term speculative factors, and instead a fundamental imbalance in the market’s supply-and-demand outlook.”