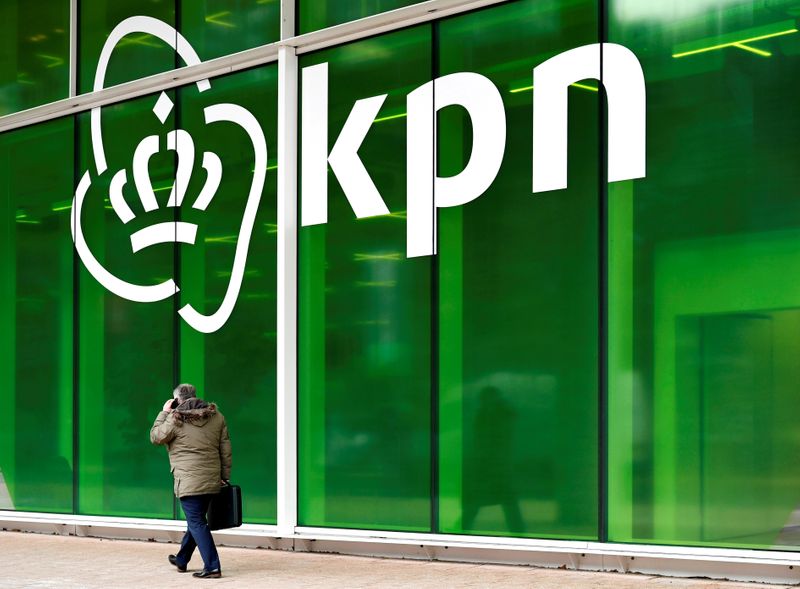 © Reuters. FILE PHOTO: KPN logo is seen at its headquarters in Rotterdam

By Pamela Barbaglia and Toby Sterling

LONDON/AMSTERDAM (Reuters) – European private equity fund EQT (NYSE:) is holding preliminary talks with KPN NV (AS:) over a possible takeover bid that could value the largest Dutch telecommunications company at about $13 billion, a source with knowledge of the matter said.

EQT has approached both KPN’s management and the Dutch government in recent weeks to discuss a possible deal, the source said.

The buyout fund, founded in Sweden in 1994 and led by Chief Executive Christian Sinding, is working with JPMorgan (N:) on a possible deal, the source said, but negotiations are still at an early stage and no deal is certain.

KPN’s top investor America Movil (MX:), which owns 16% of the Dutch firm, has not been informed of the discussions, which were first reported by Bloomberg, the source added.

EQT and KPN declined to comment while America Movil was not immediately available.

On October 28, KPN boss Joost Farwerck told reporters during the company’s third-quarter results that KPN was not planning on being bought but remained open to interest.

“If somebody comes along with an interesting proposal, we can always listen, but we’re not focused on it,” he said.

KPN, which has a market value of 11 billion euros, competes with VodafoneZiggo and T-Mobile in the highly concentrated Dutch market and has suffered a decade-long decline in sales. Farwerck has said he does not expect a quick revival.

EQT owns the Netherlands’ second-largest fibre optic network, DeltaFiber, and may use it as a vehicle to buy parts of KPN’s fibre business and extract some synergies, or cost efficiencies, if an outright takeover fails to win the blessing of Dutch government officials, the source said.

In May, the Dutch government passed a law that allows it to block takeovers of companies in the telecommunications sector that it deems to be not in the interest of national security.

“Any deal for KPN needs to be friendly. EQT will never go hostile,” the source said.

The Netherlands’ Economic Affairs ministry, which oversees KPN, did not respond to requests for comment on Thursday.

An attempt to buy KPN for 8 euros per share in 2013, by America Movil, floundered on KPN’s poison pill defences, which are still in place.