Can EUR/USD Reverse Down? | Investing.com

The forex market on the daily chart is rallying from a parabolic wedge sell climax that formed the 2nd leg of a double bottom with the September low. That is a common bottom pattern. Traders expect at least a couple small legs sideways to up over the next week or two. 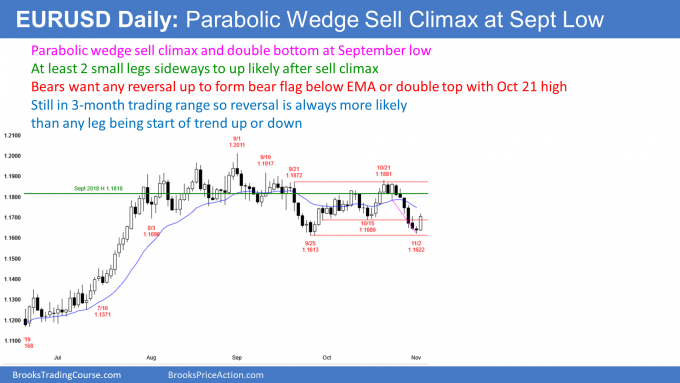 The bears hope that the rally will form a bear flag. For example, they would like it to go sideways for a few days and then resume down again from a test of the EMA. If the rally breaks above the EMA, they will then try for a double top with either the October 21 high or the September high.

Since the chart has been in a trading range for several months, the bulls will likely be disappointed within a week or so. For example, if the EUR/USD goes sideways around the EMA and the October 9 high, there will be a head and shoulders top bear flag. That will give the bears hope again. Right now, traders expect at least slightly higher prices.

The EUR/USD forex market has been rallying strongly overnight on the 5-minute chart. Day traders have been buying for the swing up. Since the range is about average, the bull trend will probably not continue much higher. The bulls will start taking profits. This will result in a 20–30-pip pullback.

Once the bears see that, they will begin to sell rallies for 10-pip scalps. Also, the bulls will start buying pullbacks instead of buying at the market. With traders buying low and selling high, the bull trend should begin to evolve into a trading range.

Can the EUR/USD reverse down? It probably will not because the rally is strong. But if the rally stops and the chart begins to go sideways, the bears would have a 30% chance of a reversal down late in the day.