Cardano has implemented the latest version of its testnet, Alonzo White, bringing smart contracts one step closer to a final release.

IOHK announced today a successful hard fork in which Cardano upgraded its testnet to Alonzo White. The upgrade went live on Jul. 15 at 19:44 and is now producing blocks. 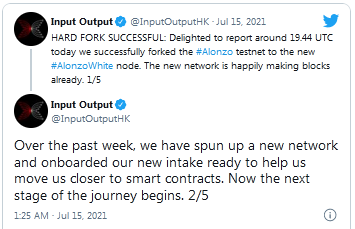 Alonzo White is an upgrade to Cardano’s previous testnet, Alonzo Blue, which offered smart contracts to a limited set of technical insiders. With this upgrade, the team let about 500 validators, stake pool operators, and developers test out the feature.

Alonzo White will run for two to four weeks before the testnet moves to its next stage. The final part of the Alonzo upgrade will take place in September 2021.

When Cardano launches smart contracts on its mainnet, developers will be able to launch dApps for use cases like decentralized finance (DeFi), non-fungible tokens (NFTs), and more.

Alonzo White comes at a time when Cardano has been criticized for rolling out new features slowly. Last year, Cardano leader Charles Hoskinson claimed that Cardano would have thousands of apps by July 2021. Today, there are only a few apps by some estimates.

In a YouTube video, Hoskinson has attempted to reassure users that the project is on track regarding its development roadmap. Hoskinson asserted that “the velocity is exactly where it needs to be, and the progress is exactly where it needs to be.” He added that there is “enormous commercial interest” in Cardano and stated that several teams have expressed interest in building on it.

Hoskinson additionally told Crypto Briefing earlier this year that it is critical for Cardano to methodically test its network before it rolls smart contracts out to the public.

Despite the slow arrival of smart contracts, Cardano has made progress in other areas. Its Mary mainnet upgrade introduced native assets in March. Meanwhile, Cardano’s native token (ADA) was added to Grayscale’s multi-asset offering for institutions this month. Analysis Cryptocurrency Worldnewstalk - September 18, 2021
0
Indian visitors talk on their mobile phones outside the Google stall at the India Mobile Congress in New Delhi on Sept. 27, 2017.Prakash...

Commodities Worldnewstalk - September 18, 2021
0
© Reuters. Japan's former Minister for Foreign Affairs Fumio Kishida, one of the candidates for the presidential election of the ruling Liberal Democratic...

Factbox-Key economic policy stances of candidates to be Japan’s next PM...