Central Banks Around The World Move To Curb Inflation


Yesterday, during the US session, we received the country’s weekly number, which showed a considerable increase from the previous reading. Yesterday’s main event on the economic calendar was the Bank of Canada (BoC) and the accompanying overall monetary policy report, followed by a press conference.

During the early hours of the Asian morning today, the Bank of Japan (BoJ) delivered its . Another significant economic event, which will take center stage later on in the day, will be the European Central Bank (ECB) , together with the monetary policy statement.

Yesterday, during the US session, we received the country’s weekly crude oil inventories number, which showed a considerable increase from the previous -0.431 million showing up at +4.267 million.

The rise in inventories forced oil bulls to step back for a bit and allow the bears to take control, resulting in a decline in . The higher indicator number shows a slightly lower demand for oil products, but oil production remains at the same level overall.

The slight lack of demand might partially be caused by higher prices, which consumers have to pay at the petrol stations. Also, because of global supply disruptions, rising inflation is making other goods and services more expensive, forcing consumers to re-think their spending.

Although we are currently seeing a slight decline in oil prices, this may be a temporary effect. It could a temporary correction before another possible leg of buying.

However, yesterday’s main event on the economic calendar was the Bank of Canada (BoC) interest rate decision and the accompanying monetary policy report, followed by a press conference. In the monetary policy report, the BoC stated that they have decided to end their quantitative easing program and switch to the reinvestment stage because “the Canadian economy is once again thriving.”

The Bank kept its overnight rate the same as previously, at +0.25%. Also, the committee expressed their concerns about rising inflation caused by global supply chain disruptions and believes that higher prices might remain elevated for a while.

This means that the CPI figures may stay slightly above the Bank’s target range, between +1% and +3%. However, the committee is expecting inflation to ease off by late 2022. The Canadian dollar may stay on the stronger side if oil prices continue their journey north. 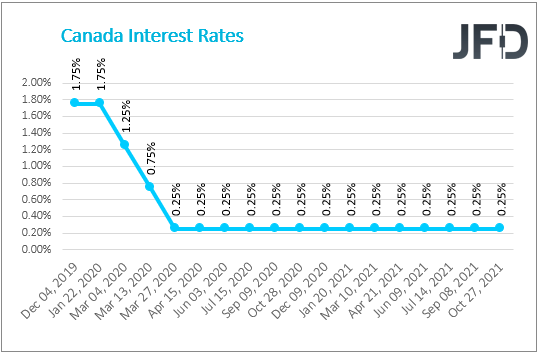 From around the end of September, was seen sliding lower, but around mid-October, the pair paused its decline and entered consolidation. The rate trades in a tight range, roughly between the 1.4330 and 1.4440 levels.

Although the prevailing trend was to the downside, we would prefer to wait for a violation of the lower bound of that range first before examining a possible continuation move lower. Until then, we will take a neutral stance. A break of the lower side of the range and a drop below the 1.4293 hurdle, marked by yesterday’s low, may invite a few more sellers into the game, as a forthcoming lower low would be confirmed.

That’s when we will aim for the 1.4161 zone, a break of which could set the stage for a move to the 1.4053 level, marked by the lowest point of April 2017. On the upside, a break of the upper side of the previously mentioned range could spark interest in the eyes of a few more bulls.

During the early hours of the Asian morning today, the Bank of Japan (BoJ) delivered its monetary policy report, followed by a press conference. The Bank kept the same policy in place for now and said that it aims for inflation to remain below 2%, at least for two years more. The BoJ Committee also downgraded their growth outlook for this year, blaming lower consumption and production disruptions.

The indecisive trading activity this weak is forcing the pair to move sideways. This led to a massive break of the short-term upside support line taken from the low of Sept. 22. Although this might be a bearish indication, we would still prefer to wait for a rate drop below the 113.40 hurdle, which is near the current lowest point of this week. For now, we will take a cautiously-bearish approach.

Eventually, if the slide happens and the rate falls below the 113.40 zone, that may attract a few more sellers into the game, possibly leading the pair towards the 113.00 area, marked by the low of Oct. 12. If the slide continues, the next potential support target might be near the 112.08 level, the highest point of September.

Alternatively, if USD/JPY makes its way back above the upside line and then pops above the 114.31 barrier, marked by the high of Oct. 26, that could interest a few more buyers, as such a move could increase the pair’s chances of drifting further north.

Another significant economic event, which will take center stage later on in the day, will be the ECB interest rate decision, together with the monetary policy statement. Forty-five minutes later, Christine will hold the ECB press conference.

For now, ECB might keep the interest rate the same as previously, at 0.0%. No changes in the Bank’s policies are expected, but rising inflation might concern the committee. The latest inflation reading in the eurozone showed another rise, bringing it to +3.4%. This is above the ECB’s target of 2% over the medium term. The may not react much straight after the rate announcement.

However, we would keep a close eye on it during the Bank’s press conference. A negative tone could push the common currency further down against some of its major counterparts, like the commodity-linked currencies such as , , and .

The United States will deliver its preliminary . The current expectation is for a decent decline, going from +6.7% to the forecasted +2.7%.