Chart Of The Day: Beyond Meat Shares Looking To Move Beyond $200


One of the market’s hottest stocks is Beyond Meat (NASDAQ:), the El-Segundo, California-based manufacturer of plant-based, faux meat products.

Reasons for the popularity of the stock, and the products the company generates, are manifold. For starters, the trailblazing business hit a cultural sweetspot when it began selling its environmentally sustainable vegetarian products, which also cause no harm to animals, in the US in 2012.

As well, its IPO in mid-2019 was a legitimate blockbuster and is still considered one of the most successful intial public offerings in history—on the stock’s first day of trade, shares jumped 84% at the open. Beyond Meat had a market cap of $241 million at the offering, but, according to Forbes, “went public at a $1.5 billion valuation.” Then, “less than three months later, it was worth more than $13 billion.”

Though its market cap is currently a bit lower, at $9.8 billion, the stock has still seen explosive growth. With shares selling above $150, BYND is up more than 500% from when it started trading.

And, because its products are manufactured in labs, its plant-based ‘meats’ are at an advantage during the pandemic which has caused actual meat shortages due to supply chain disruptions. Plus, irrespective of COVID, plant-based meat is currently only 1% of the US market for ground beef, giving Beyond Meat’s products plenty of runway for growth. 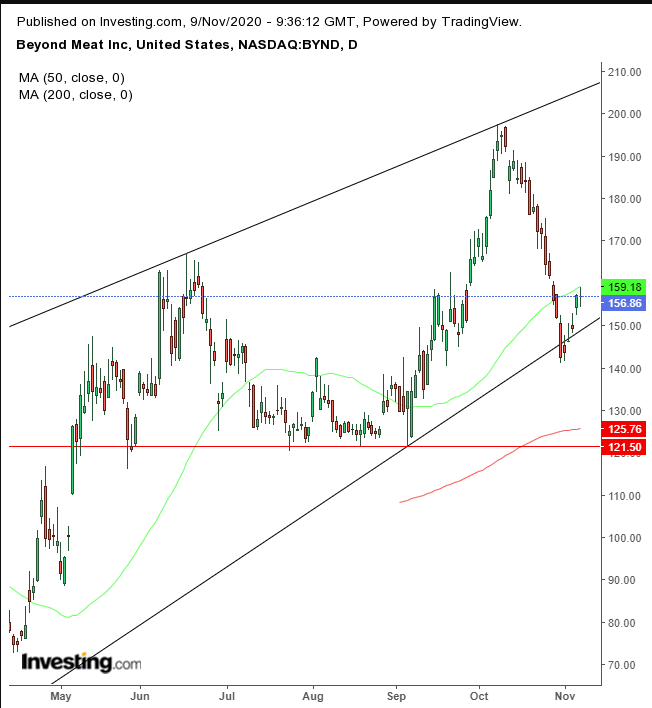 The share price jumped off the bottom of its rising channel since the Mar. 19 bottom, a week ahead of the company’s earnings report. At worst, experienced investors believe the release will be kind to shareholders. At best, the move was driven by “informed money.”

That’s a term referring to a circle of insiders who might have access to management data which—intentionally or not—may have conveyed the idea that the not-yet-public release could beat expectations.

While the 200 DMA aligned with the May-September support above $120, note that the price bounced off the 100 DMA where it closed on Friday as it struggles against the 50 DMA, the last resistance to retest the $200 level, where the rising channel is headed.

Conservative traders would wait for the earnings report in order not to be blindsided by any nasty surprises. However, waiting for results to be posted before acting would mean missing out on at least a portion of, or even the whole move, if the company beats or misses, which also increases exposure as the price moves further away from support.

Moderate traders would risk a small position, before the earnings release.

Aggressive traders would go in fully now, provided they understand and accept the risk. Money management becomes even more important, to limit losses, while allowing wins to run. Here’s an example of what a trade plan might look like:

Author’s Note: This above is just a sample, not the full analysis. That’s in the body of the article, and it could be wrong. Even if it’s right, you could still lose your trade, depending on your timing, budget and temperament. Therefore, don’t treat this trade sample as a get-rich-quick gimmick. It’s not. Successful trading can only take place with a trade plan that is personally suited to your needs. It should be something to which you commit to, over a period, during which you attempt to get on the right side of statistics. Good trading!