Chart Of The Day: Stage Set For USD/JPY To Drop


This article was written exclusively for investing.com

There was a big risk-off move overnight as news emerged that US President Donald Trump and First Lady Melanie Trump had tested positive for coronavirus. This came as rising COVID infections in big cities, such as London and New York, have once again turned them into virus hotspots.

The risk-off sentiment echoed across the financial markets, which saw the Japanese rally, while turned positive, after being lower earlier in the day. Now gold has moved into the red again.

Global index futures dropped. But as Europe opened for trading, the European indices, including the , managed to bounce off their worst levels, although they have since retreated.

Some of the risk-off moves in other markets were also partially undone as investors looked ahead to the release of the US report. But is the damage already done for the USD/JPY?

Thanks to resurgent coronavirus, lockdown measures have been stepped up across many parts of Europe and elsewhere. This has revived concerns about the pace of the economic recovery, and we have correspondingly seen some risk being taken off the table. So, it may be about time the Japanese yen joined other haven assets like gold and by breaking higher, causing the USD/JPY and other yen pairs to drop.

The has made a relatively sharp move lower overnight, but let’s see whether the downward pressure will now accelerate with the key support at 105.40 broken. More on this below, but a lot will now depend today on the outcome of the US monthly jobs report.

Unless headline jobs growth comes in well ahead of 900K expected, the is unlikely to find meaningful support, especially against gold and perhaps the yen, too. A small disappointment is unlikely to cause too much of a reaction, while a slightly positive number may actually be bad news for the dollar as it may keep risk assets supported and thus weigh on the greenback.

So, the USD/JPY bears don’t want to see a massive beat, but I reckon anything else should be okay, in so far as the bearish trend is concerned.

Ahead of the NFP, the USD/JPY had turned lower on the week, thanks to its overnight falls. Even before the overnight drop, the UJ was already looking overall more bearish than bullish to me, with price creating several lower highs and its main moving averages above market and pointing lower. 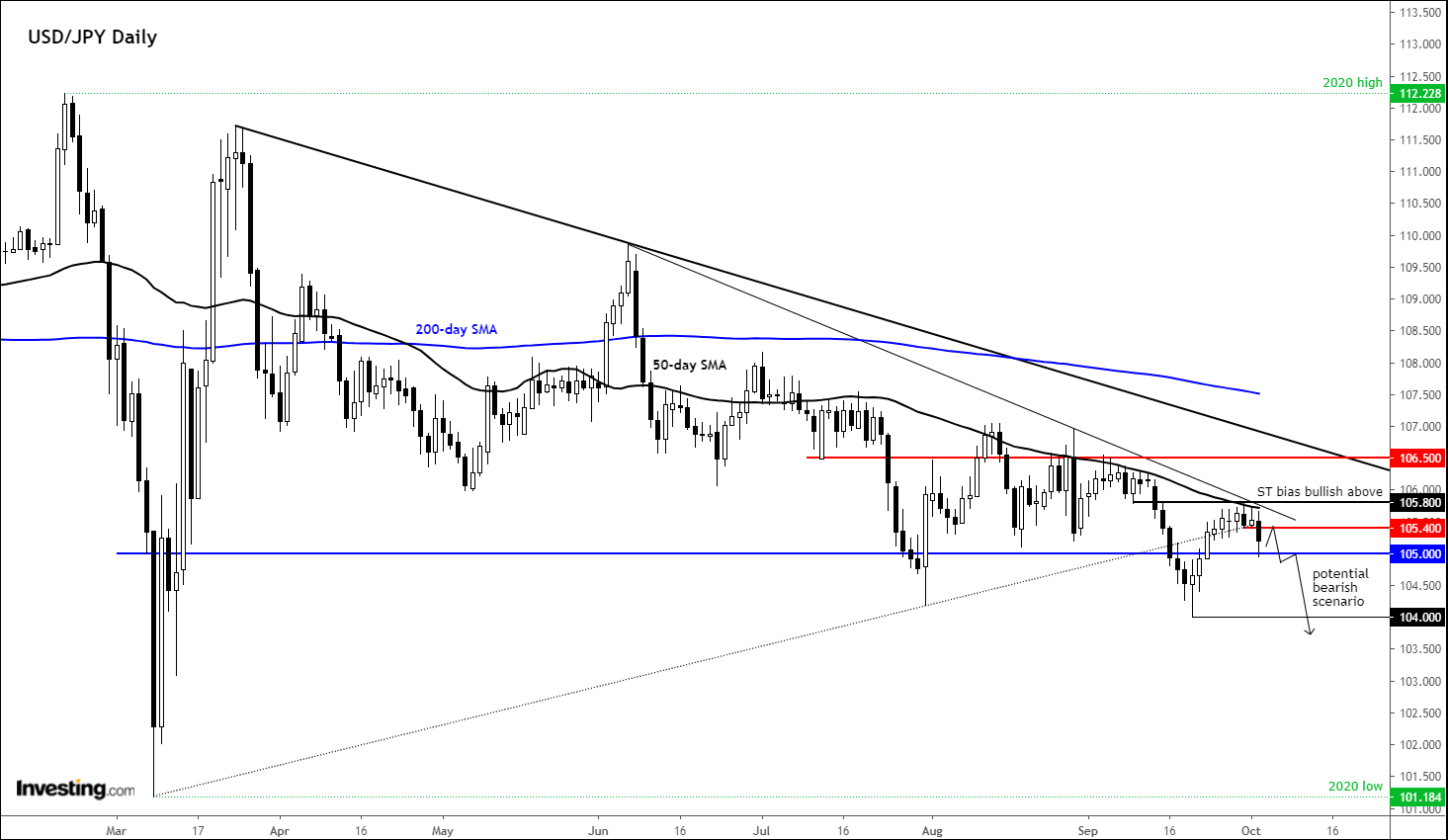 So, we have a couple of objective technical tools telling us that the path of least resistance is to the downside. I am thus expecting more weakness to come but will drop my bearish view if resistance at 105.80 breaks first and we hold above it. Should that happen, then the USD/JPY could rise to test its longer-term bearish trend line around 106.50 next.

However, for now, the focus remains to the downside, especially as rates have broken short-term support around 105.40ish. This is potentially a bearish development, so watch for the sellers to step in should price re-test this level again.

If after the jobs report, the UJ is still holding below 105.40, then we could see further technical selling later in the afternoon and possibly next week, too.

The first level of support to watch below 105.40 is around 105.00, which has already been tested. If this level gives way then there is just thin air until the most recent low around 104.00, below which there will be lots of stop orders resting from trapped bulls.

The ultimate bearish objective is the liquidity below this year’s low at 101.18.