Chart Of The Day: USD/CAD Set To Resume Lower


This article was written exclusively for Investing.com

The start of Friday’s session has been good for risk assets with European stocks and US index futures rising, while in FX, the has fallen against all major currencies, including against our featured currency—the . 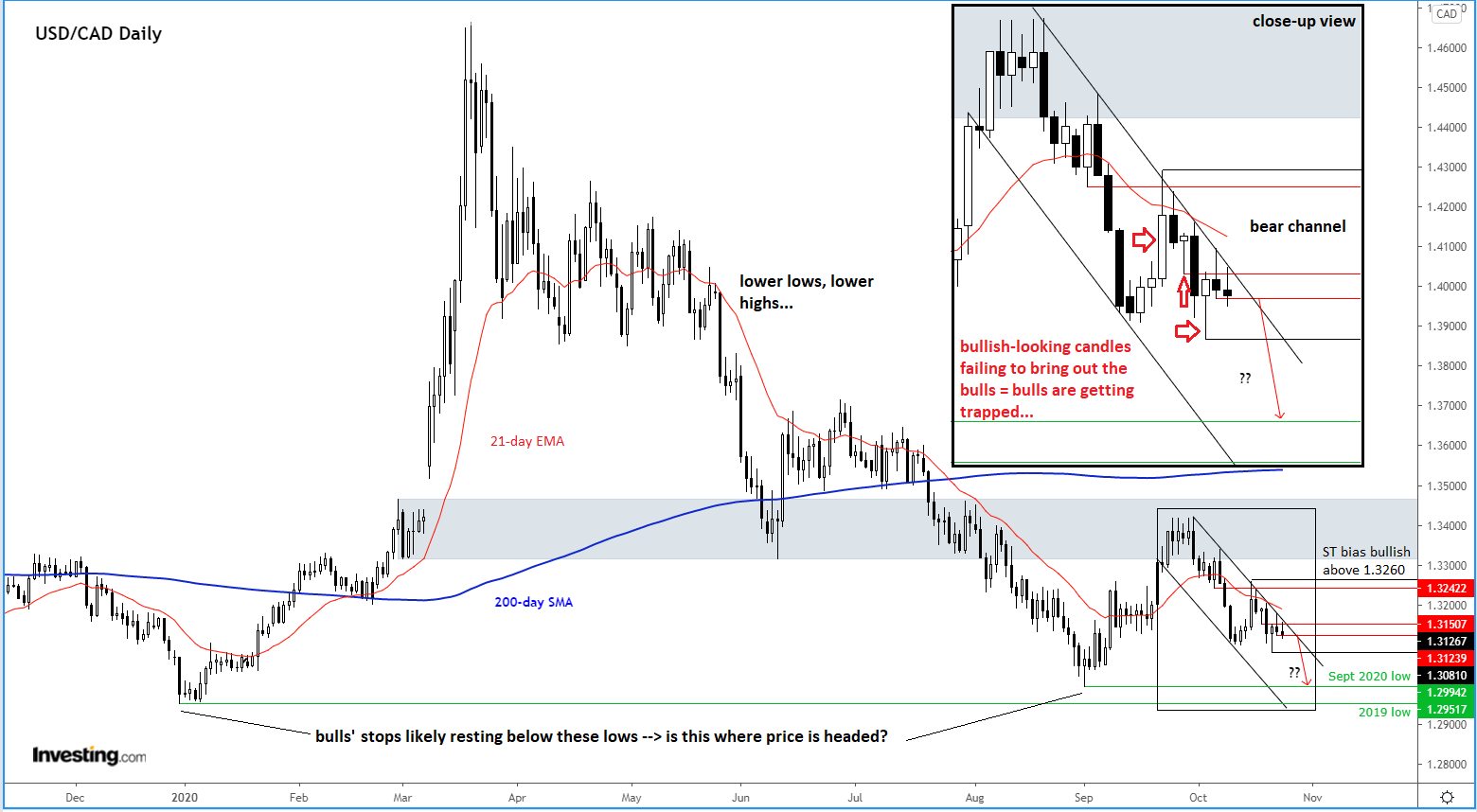 Sentiment has been boosted among other things by ongoing stimulus hopes after Nancy Pelosi said she and Steven Mnuchin are “just about there” in resolving a key piece of a fiscal package.

We have also had some positive earnings from Europe (e.g. Barclays (LON:) and Daimler (OTC:)) and solid euro-zone data.

Although virus cases and deaths have , sentiment has remained largely positive towards risk nonetheless. Investors remain hopeful that a potential vaccine will soon be approved, which should help to slow the spread of the virus and thus prevent further growth-chocking restrictions and lockdowns.

This is why I think the markets have not panicked like they did in March. Indeed, that the US Food and Drug Administration (FDA) has approved Gilead (NASDAQ:)’s antiviral therapy remdesivir has further raised hopes that we are getting closer to finding cures and treatments for COVID.

Thanks to the ongoing risk rally, the USD/CAD continues to print bearish price action. Rates have been trending lower for months, inversely mirroring the rallying equity markets. With energy prices also recovering from their March lows, this has further boosted the appetite for the CAD.

More recently, prices have rallied sharply, something which I had about back in July when pries were showing the first glimpses of recovery. has also managed to hang around its recent highs amid ongoing intervention by the OPEC+ group. Consequently, investors have warmed towards the Canadian dollar, given that energy exports make up a big chunk of the nation’s GDP.

Thus, in the upcoming next week, don’t be surprised if the Bank of Canada turns out to be less dovish than it has been previously. However, hints of further policy loosening may derail the CAD’s rally, at least momentarily.

But from a purely technical point of view, the USD/CAD continues to look bearish to me. Price is currently residing inside the bearish channel, making lower lows and lower highs:

Notice that some of the recent bullish-looking candles (such as the ones I have circled in the inset) have failed to bring out the bulls and cause prices to rise. This is typical of a bearish trend, with price creating lots of false signals and false hopes, before dropping to take out the accumulated sell stops from the trapped long positions.

With that in mind, there will be a bunch of stops undoubtedly resting below Wednesday’s hammer candle at or below 1.3080. That is exactly where I am expecting the USD/CAD to head to very soon.

But potentially, we may see a much bigger drop given the above fundamental considerations and the fact that the low from September of this year (1.2994) and that of last year (1.2951) are not very far now. It is likely that the bigger stops from trapped bulls would be resting below these lows, and those orders may pull prices towards them in an accelerated move, soon.

As things stand therefore, the path of least resistance is to the downside.

However, if rates were to break out of the bearish cannel then that would put the bears in a spot of bother. The sellers will be in real trouble if price then goes on to make a higher high above 1.3260. So, 1.3260 is the line in the sand for me: bearish below, bullish above.