The is down more than 0.5% as of the time of writing, trading at the very bottom of the session, demonstrating no takers. Should traders dismiss that as simply due to risk-on appetite, they should note that both Treasuries and are rising.

It’s strange too for the greenback to be sold off when US futures and stocks rise together with gold and Treasuries. Even more confounding, the dollar was been recovering from a slump fueled by the gridlock surrounding the possibility of another government stimulus package.

Since more money in the system dilutes the value of each individual dollar, now that there’s renewed risk-on because of mixed election results pointing to the probability of a divided government, negating fears of a Blue Wave triggering massive new stimulus being rolled out, why would the dollar start falling again?

Perhaps it’s due to a total lack of coherent fundamental drivers. As such, it might be time to look to the technical forces of supply and demand for an explanation. 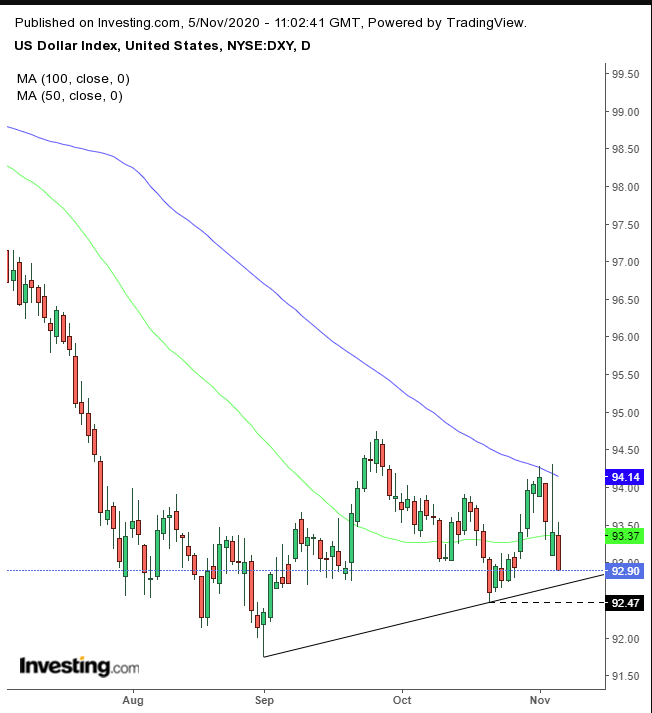 The USD found an unwelcoming 100 DMA on Monday, as a bearish stronghold pushed prices back down. Bulls retested the bearish resolve on Wednesday, at the 94 level, but bears flooded bulls with supply, driving bulls down toward the neckline of a H&S continuation pattern.

The pattern no doubt developed as the dollar was pushed and pulled on the whipsaw of conflicting market themes, gyrating between its haven status and expectations of its value being watered down by stimulus.

Nevertheless—and despite the conflicting fundamental drivers—as an entity, the global reserve currency’s trade developed its own rhythm. If the dollar falls below 92.50, it will have completed a phase in market mechanics in which a chain reaction of positions winding and unwinding would set up momentum for the dollar to retest its 91.75, Sept. 1 low. At that point, traders would begin eyeing the psychological 90.00 roadblock as they consider what would happen if it’s breached.

Conservative traders might want to wait for the downside breakout to produce a new low in the downtrend, then return to retest the integrity of the neckline, to insure a continued selloff before risking a short position.

Moderate traders should wait for the same lower trough and the expected return-move for a better entry, even if not for further confirmation that market mechanics were pushing the dollar lower, on a downward trajectory.

Aggressive traders are likely to be content with a neckline penetration that exceeds at least the Oct. 21 low, provided they understand the potential for a bear trap and are prepared, with a coherent, preset trading plan.

They need to consider that if they enter after the penetration reached far enough to go below 92.50, where they become exposed to a significant pullback toward the resistance of the pattern. At that point they’d be too close to the presumed support of the Sept. 1 level and the powerfully psychological 90 level, potentially diminishing any chance of a favorable risk-reward ratio.

Therefore, they must do one of the following things: 1. Wait for a corrective risk closer to resistance; 2. place an artificial stop that has no natural anchor, such as a resistance, but is arbitrarily made up to keep risk low, which could wipe out the position entirely; or 3. place a target below the expected supports, taking the chance the price won’t get there too soon. Here’s an example:

Author’s Note: This is just a trading sample. It should go without saying that there is no guarantee the dollar will resume its present course or that our interpretation is correct. Moreover, there are many ways and variations to approach this trade. This isn’t the one, true way to trade it. Finally, your personal circumstances—timing, budget and temperament—will impact the results of your trades. One win or loss is meaningless. You must find a style that makes sense for you and with which you’re comfortable, in order to have a shot at trading in the long run, by stacking up the statistics in your favor.

It takes time to learn how to do that. So, if you’re not prepared to invest your time and money, as with any other profession, trading is not for you.