Chart Of The Day: Yen On The Brink Of Bullish Breakout


The is up a solid 0.63% at the time of writing, showing no bearish resistance. Among the majors, only the and are stronger than the dollar, and even the stronger AUD is 0.6% weaker than the yen.

That makes the yen today’s outperforming major currency—due to its haven status.

Then dollar-yen pair is testing the intraday lows of July and September. If it closes at this level, it will be the lowest close for the dollar versus the yen since the Mar. 9 low. Indeed, the pair is on the verge of a single that it is headed there—a warning to dip-buying equity bulls. 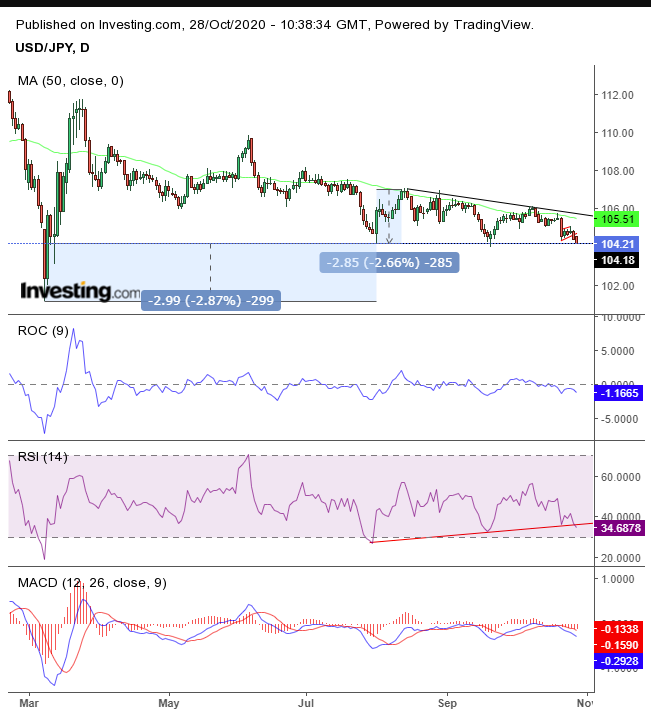 This makes it the third time the currency pair has dropped below 105 since July 30. On the other hand, every subsequent advance reached ever-lower highs—forming a descending triangle.

The psychology of this trading pattern is that buyers’ interest remained fixed. Meaning they will only buy if the dollar is cheap enough compared to the yen, below 105.00. Meanwhile, sellers’ eagerness has been steadily growing as they are willing to sell at lower levels with each rise.

If this dynamic remains, eventually sellers will push the price below the range’s base, triggering a chain reaction that would push the pair further lower. Bulls rushing to liquidate positions will remove demand from the equation, while short-sellers orders will be triggered, increasing supply—all working in concert to force the price another leg down.

Considering the rising flag that preceded the second-day decline we’re seeing, we can expect the price to fall further, indeed completing the descending triangle pattern.

The MACD’s short MA sunk below the long MA for the third time since the triangle’s development. Note, while the first two bearish crosses occurred when the pair was at the triangle top, the current one took place when the pair was already on the bottom, giving it the oomph it needs to break through the bottom, especially following the bearish flag’s downside breakout.

The RSI crossed below its support during the period the price developed the triangle. The other momentum indicator, the ROC, didn’t register a dramatic move inviting a correction.

Author’s Note: This is but a “sample,” which means there could be other ways to approach this trade. Consider your timing, budget and temperament when drawing your own trade plan. Also, remember that trading includes good days and bad and what separates winners to losers is overall trading over a period. So, it’s imperative to find your comfort zone and track your performance to finetune your personalized strategies.