The jumped today, increasing the currency’s advance to a second day after yesterday’s US release beat expectations. However, we remain on the USD and view these recent moves as nothing more than a corrective rally within a downtrend that may be about to take a plunge.

Indeed, the greenback remains near its lowest level in 2 ½ years. And another 4% dip would place it at its lowest in 6 years. Analysts now say “the US dollar could be in a decade-long decline,” after the Fed’s of its long-time inflation policy.

At the same time, the ongoing trade war between the US and China could put the on a path to muscle into the dollar’s position as the global reserve currency. Of course, it would take a few additional catalysts for that to happen according to analysts who’ve rejected the idea, at least for now.

Nevertheless, World Bank and IMF data suggest that China will overtake the US as the world’s largest economy by 2024. For now, a study of the supply-demand forces paints a technical picture of yuan dominance over the dollar in the long term. 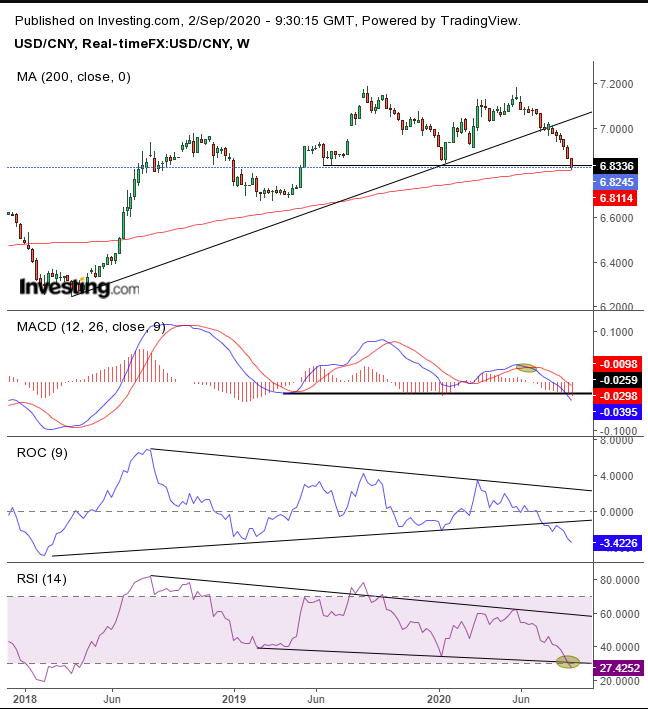 The dollar-yuan pair completed a massive double-top that played out over 15-months. The price penetration, however, is very slight, and it rebounded off the 200-week MA, which it touched for the first time since June 2018.

As such, it has the potential to bounce back. However, if the dollar weakens further, as we fully expect it will, we could see demand dwindle for the USD in general, and in particular versus the renminbi.

Both price and momentum-based indicators are breaking down, supporting the view that prices are headed lower. The MACD’s short MA crossed below the long MA, triggering a sell signal. Note, the previous two MACD bearish crosses predicted declines of about 4%. The final cross may have a longer-term impact as it also fell below its support levels since April 2019.

The Rate of Change provided a downside breakout to a symmetrical triangle since January 2018 and the RSI fell through the bottom of an already bearish pattern of a falling channel.

Conservative traders might do well to wait for the USD/CNY to clear its February low, to confirm that the balance has turned to supply.

Moderate traders may be content with a full week below the 200-weekly moving average. Risk-Reward ratios favor waiting for a return move toward the double-top neckline.

Aggressive traders may short at will, having a trade plan that considers timing, an investment that makes sense according to their available capital and which will correspond to their risk tolerance. Here’s an example:

Author’s Note: This sample is just that – a sample. It isn’t necessarily the only correct way to handle this trading opportunity. First, traders approach a trade differently according to timing, budget and temperament. Second, they can employ different trading strategies. Finally, the same trader could divide his or her capital designated to this trade into smaller trades to either minimize risk, or to capture greater gains, waiting for potentially better entries.

Don’t expect to get rich quickly, because trading rapidly, without a firm plan, will only make you poor more quickly. Fools rush in. Take your time, and make sure you understand all the relevant factors affecting your trade, as we listed in our sample. Only enter trades you’re comfortable with.