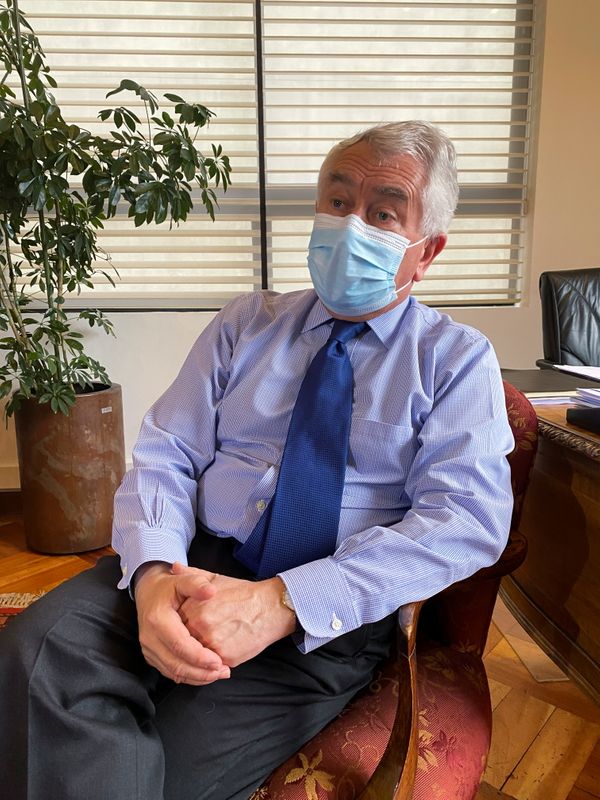 © Reuters. Chilean Health Minister Paris is pictured during a Reuters interview, as the outbreak of coronavirus disease (COVID-19) continues in Santiago

SANTIAGO (Reuters) – Joe Biden’s win in the U.S. election is raising hopes in Latin America that a war over medical supplies at the start of the COVID-19 outbreak will not be repeated once vaccines are approved for use, Chile’s health minister told Reuters on Friday.

Enrique Paris said he believed Biden’s leadership would allow for countries to present a more “united” front against the pandemic, avoiding the commercial battles by nations including the United States to secure ventilators, masks and personal protective equipment seen earlier this year. [nL8N2BR5O2]

“There was a trade war in which those who could pay more got more and those who could take things out of or even rupture distribution chains did so,” Paris told Reuters in an interview in his downtown Santiago office.

He said Chile had to charter or send military planes to pick up supplies and keep flight plans secret.

“It was horrible and I hope it doesn’t happen again,” Paris said. “I believe that Mr. Biden has another vision of what is diplomacy and global understanding between countries.”

Despite the “very good news” this week from Pfizer (NYSE:) that its vaccine had proved 90% effective in late-stage trials, Paris said Latin America – which topped global charts for COVID cases and deaths between for several months up to August – should prepare for a second wave like the one current ravaging Europe.

“We should not think of ourselves as in a zone of stability,” he said. “We must not lower our guard.”

Chile has signed up for 7.6 million doses through the global vaccine distribution scheme COVAX, co-led by the GAVI vaccines alliance and the World Health Organization.

Paris said Chile had paid extra to be able to pick the vaccines it received from COVAX. But he added that he had proposed, and received backing from his fellow Latin American and Caribbean health ministers, to push for all countries to be treated equally under COVAX.

“We proposed as ministers that there should be just one format … a more equitable way for everyone to choose or for everyone to receive the vaccines that the WHO deems appropriate for each country,” he said.

Paris said the Pfizer vaccine represented one option for Chile’s vaccination campaign but that the country had sought to diversify to assure a steady supply.

Amid concerns about the cold storage required for Pfizer’s vaccine, Paris said the drugmaker had pledged to get the doses near to the locales where they would be administered, after which they could be stored in Chilean facilities for up to four days.

Chile views Pfizer’s vaccine as part of the immunization rollout it hopes to start in the first quarter of next year, Paris said. The plan aims to include a larger quantity of China’s Sinovac vaccine whose trial in Chile has been partly funded by the government in return for a “significant” discount on the eventual product, he said.