With no major U.S. economic reports scheduled for release this week, the U.S. dollar is set to take its cue from political and pharmaceutical headlines. President Donald Trump was busy this Labor Day weekend throwing out threats to decouple from China. China toughened its pressure on Australia by accusing an Australian journalist of carrying out illegal activities. Currencies and equities sold off in response as this increase in trade tensions foreshadow more negative headlines in the weeks leading up to the U.S. election. Trump also suggested that a vaccine could be ready in October, but general skepticism and overall concerns about the safety of a fast-tracked vaccine has investors shrugging off this comment. fell hard at the start of the New York session as plunged 6% in the early trading hours and drove all of the Japanese Yen crosses lower.

The worst performing currency today was . EU-UK Brexit talks headed in the wrong direction after Prime Minister Boris Johnson threatened to walk away from Brexit negotiations if the EU does not budge on its demand. Internal frustration is rabid as the UK government’s top lawyer quit over Brexit withdrawal disagreements. According to Germany’s Finance Minister Olaf Scholz, the latest signals from London do not raise hopes for a Brexit deal, and a disorderly Brexit would be a real disaster for Britain. The same could be said for the EU, but the UK would certainly bear the brunt of the pain. More losses for the are likely ahead of this week’s . German industrial production weakened and, while trade activity improved, it was due to lower exports. The ECB will be worried that the Eurozone recovery is losing momentum and virus cases are on the rise.

We’ve been bearish Australian dollars for some time, and our concerns about the currency’s outlook has only intensified over the past week. Australian media companies pulled all of their journalists out of China. A five-day diplomatic standoff between the two countries ended with Australia rushing to evacuate two journalists. China also accused Cheng Lei, a popular Chinese born Australian journalist, of illegal activities. Escalating tensions with its largest trading partner is bad news for Australia, particularly at a time when the government extended the hard lockdown in Victoria until Sept. 28 as the infection rate declines more slowly than they hoped. The economic consequences of trade tensions and the virus puts at risk of falling to 70 cents. The also fell sharply and could extend its losses if this week’s PMI numbers are weak.

The Canadian dollar will be in focus tomorrow with a on the calendar. At the last monetary policy meeting, the central bank said economic activity is improving as lockdown measures eased but rates need to remain at current levels as it will be a “long climb” back to recovery. Since the July meeting, we continue to see improvements in Canada’s economy, with picking up, jobs being added back, the falling and manufacturing activity accelerating. While the Canadian government is worried about the 25% rise in coronavirus cases over the last week, the curve is flat compared with other countries. However, the sell-off in U.S. stocks and the slowdown in the global recovery will have the Bank of Canada concerned about its own economy. Officials may also be asked about whether they will follow the Fed’s inflation strategy changes and while they may not make official adjustments, they could admit that inflation is low and be allowed to exceed target at times. 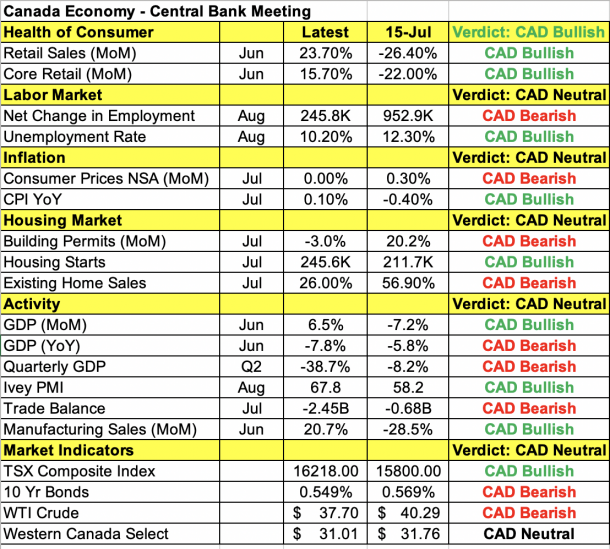