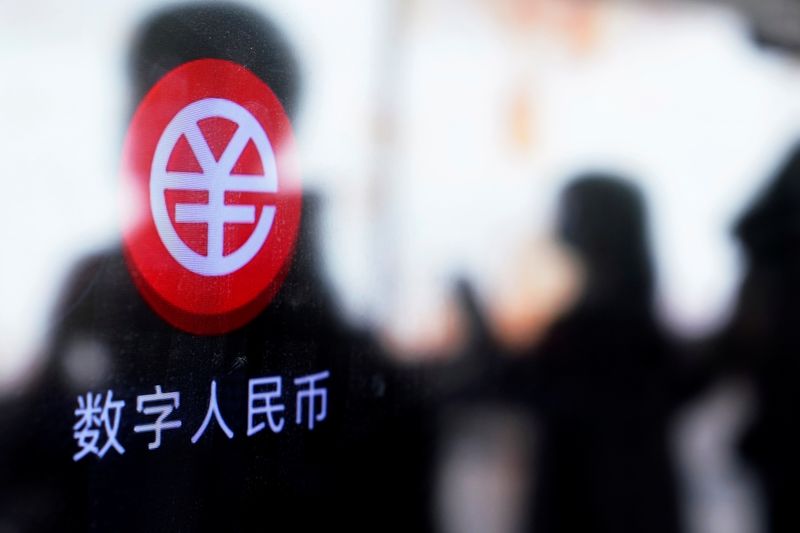 © Reuters. FILE PHOTO: A sign indicating digital yuan, also referred to as e-CNY, is pictured on a vending machine at a subway station in Shanghai, China April 21, 2021. REUTERS/Aly Song

BEIJING (Reuters) -China’s central bank said on Friday it would steadily push forward pilot schemes to develop its digital yuan, and will not set a timetable for rolling out the digital currency.

China is a front-runner in the global race to launch central bank digital currencies (CBDC) and has held trials in several major cities including Shenzhen and Shanghai.

The country will mainly use its digital yuan for domestic retailing payments, while exploring pilot schemes in using the digital currency for cross-border payments, the People’s Bank of China (PBOC) said in a white paper published on its website.

Pilots on cross-border payment will be based on respecting the monetary sovereignty of China and foreign countries complying with laws of countries involved, it said.

In April, Zhou Xiaochuan, China’s former central bank governor, said China should not rush to use the digital yuan for cross-border payments due to regulatory obstacles and foreign concerns about it’s global impact.

The PBOC will deepen its research on the impact of a digital yuan on monetary policy, the financial system and financial stability, the bank said.

The central bank warned that cryptocurrencies are mostly used for speculation, which threatens financial security, and such currencies could be used for money laundering and other illegal economic activities.