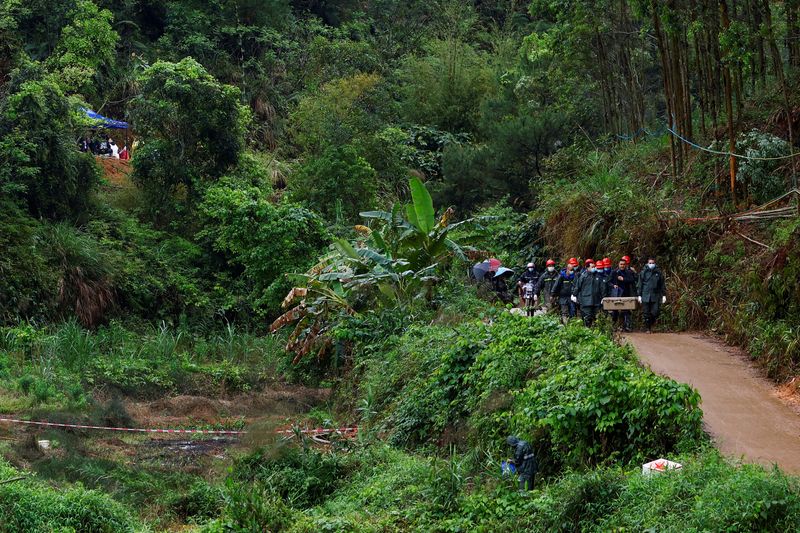 Flight MU5735 was en route from the southwestern city of Kunming to Guangzhou on the coast on Monday when the Boeing (NYSE:) 737-800 plummeted from cruising altitude at about the time when it should have started its descent to its destination.

Human remains and personal belongings of the 132 people on board have been found but no survivors, and debris from the crash was scattered over a wide area of the heavily forested slopes in China’s Guangxi region.

It was the first major air disaster in China in a dozen years, and while the cause of the incident remains unknown, it has prompted the government to reinforce safety checks in aviation and other industries.

“The search area has now been expanded to 200,000 square meters,” Lao Gaojin, a local government official, told a news conference, adding that 2,248 local residents had joined the search and rescue on Friday.

The other black box – the cockpit voice recorder – was found on Wednesday, and has been sent to Beijing for examination by experts.

It could take 10 to 15 days to arrive at a preliminary analysis, and longer before a final conclusion can be presented in a report, according to Chinese state media.

“Currently, we cannot determine the exact time needed for the data downloading and analysis of the black box already recovered,” said Mao Yanfeng, an official at the Civil Aviation Administration of China (CAAC), adding that the exterior of the device had been damaged.

The crash investigation is being led by China but the United States was invited to take part because the Boeing 737-800 was designed and manufactured there.

U.S. Transportation Secretary Pete Buttigieg said Wednesday that Chinese authorities had invited the U.S. National Transportation Safety Board (NTSB) to take part in the investigation, adding that he was very encouraged by the invitation to be on the ground in China.

The NTSB, however, later said it had not yet determined if investigators would travel to China in light of visa and quarantine requirements.

It would be important for the NTSB to be able to participate in the downloading of the cockpit voice and data recorders, said Anthony Brickhouse, an air safety expert at Embry-Riddle Aeronautical University.

“Just for the sake of openness, whenever you do a download, it’s important to have other parties in the room,” he said.

More than 200 distraught family members of the 132 people on board the doomed flight have since visited the crash site.

“Rescue workers have so far found human remains, collected 18 samples of finger prints and 101 pieces of personal belongings of the passengers,” said Lao.

More than 230 experts have also been taking DNA samples from family members at the scene as well as from the crash site, he said.

Debris from the jetliner including engine blades, horizontal tail stabilisers and other wing remnants was concentrated within 30 metres (90 feet) of the main impact point, which was 20 metres (60 feet) deep.

A 1.3 metre-long fragment suspected to be from the plane was found about 10 km (six miles) away, prompting a significant expansion of the search area.

According to flight tracking website FlightRadar24, the plane briefly appeared to pull out of its nosedive, before plunging again.

Authorities said the pilots did not respond to repeated calls from air traffic controllers during the rapid descent.