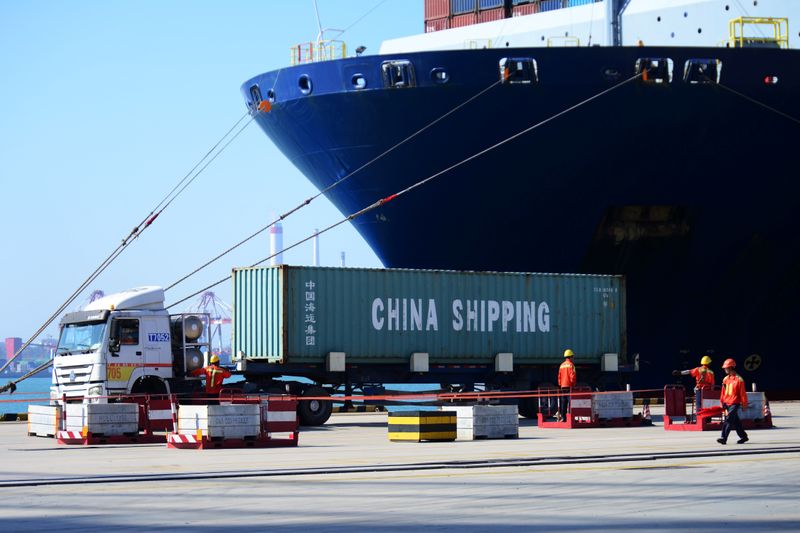 © Reuters. Truck transports a container next to a cargo vessel at a port in Qingdao, Shandong

BEIJING (Reuters) – China exports grew at the fastest pace in 19 months in October, while imports also rose, official data showed on Saturday, as the world’s second largest economy continued to recover after being hit hard by the coronavirus crisis earlier this year.

Exports in October rose 11.4% from a year earlier, beating analysts’ expectations of a 9.3% increase and quickening from a solid 9.9% increase in September.

The surge in exports pushed the trade surplus for October up to $58.44 billion, compared with the poll’s forecast for a $46 billion surplus and a $37 billion surplus in September.

China’s trade surplus with the United States widened to $31.37 billion in October from $30.75 billion in September.

China’s exports could stay strong in the rest of 2020 as domestic firms resume production faster than global rivals and sell more COVID-19 related goods such as face masks, Liu said.

However, some analysts said exports could come under pressure in the coming months, as major European economies, including France, Germany and the United Kingdom, went back into lockdown as a second wave of coronavirus cases gathered strength.Factory activity accelerated at the fastest pace in nearly a decade in October, a private survey showed, although the official survey pointed to some slowdown in the expansion. Export orders expanded.

Imports rose 4.7% year-on-year in October, slower than September’s 13.2% growth, and underperforming expectations in a Reuters poll for a 9.5% increase, but still marking a second straight month of growth.

Chinese airlines are shunning some deliveries of Airbus (PA:) aircraft, citing fears of coronavirus infection for their staff in the latest tussle over efforts to keep delayed deliveries on track despite the pandemic, industry sources said.

Analysts said the solid trade performance could provide a boost to China’s broader economic recovery, which has gained steam after suffering from a deep slump earlier this year.

China’s economy grew 4.9% in the third-quarter from a year earlier, but growth could slow to just over 2% this year – the weakest in over three decades but still much stronger than other major economies.

“China has a better recovery from the pandemic and has a comparative advantage, so it has gained a larger market,” said Zhou Hao, an economist at Commerzbank (DE:) in Singapore.

“Of course, this advantage is also temporary and may last until the end of the year.”