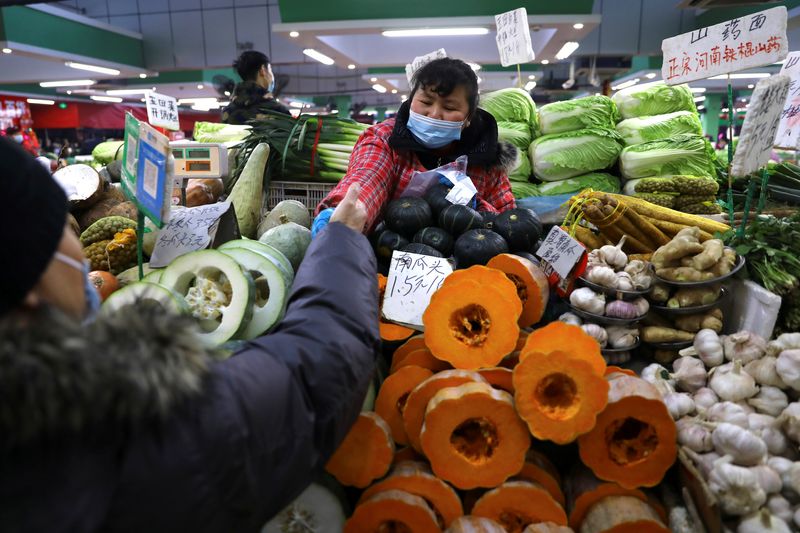 © Reuters. A customer buys vegetables at a stall inside a morning market in Beijing, China January 14, 2022. REUTERS/Tingshu Wang

By Kevin Yao and Ryan Woo

BEIJING (Reuters) -China on Saturday targeted slower economic growth of around 5.5% this year as headwinds including an uncertain global recovery and a downturn in the country’s vast property sector cast a pall on the world’s second-largest economy.

There were few surprises in Premier Li Keqiang’s annual work report to the annual session of parliament, as China puts a premium on stability in a politically sensitive year during which President Xi Jinping is expected to secure a precedent-breaking third leadership term in the autumn.

“We must make economic stability our top priority,” Li told delegates gathered at the cavernous Great Hall of the People on the west side of Tiananmen Square.

Amid coronavirus curbs, this year’s parliamentary meeting will be the shortest ever at 6-1/2 days.

“The world economic recovery lacks drive, and commodity prices remain high and are prone to fluctuation. All of this is making our external environment increasingly volatile, grave and uncertain,” Li said.

While the government vowed to ensure supply of key agricultural products including grains, the agriculture minister said on the sidelines of parliament China’s current wheat crop-growing condition could be the worst in history.

Li said that maintaining steady export growth is getting harder, and supply of energy and raw materials remains inadequate.

Also weighing on the economy is a property downturn triggered by a government campaign to control borrowing among highly indebted developers. An ensuing tightening in liquidity squeezed the sector and chilled buyer sentiment.

Last year, China’s gross domestic product grew 8.1%, beating the government’s target of over 6%, helped by robust exports to economies hit by COVID-19 and a low statistical base in 2020, when the pandemic began to spread worldwide.

Some analysts said this year’s goal is tougher to reach.

“It may be a bit difficult to achieve the target, and we need to take some measures to achieve it,” said Zong Liang, chief researcher at Bank of China.

While investing abroad under China’s Belt and Road initiative, China must guard against “overseas risks”, Li said, in contrast to his push last year for outbound investment and cooperation.

He did not mention the war in Ukraine, in which China has refused to condemn Russia’s attack or call it an invasion. As usual, Li’s report was primarily focused on economic issues.

Apart from the pandemic, implications from the Russia-Ukraine conflict for supply chains and price volatility also cloud China’s near-term outlook.

Zhiwei Zhang, chief economist at Pinpoint Asset Management, said Li’s caution reflects potential geopolitical risks. “The Ukraine crisis and the sanctions imposed by many countries on Russia have made such risks clear,” he said.

China remains committed to the Communist Party’s policy of “resolving the Taiwan question in the new era”, Li said.

Guo Tianyong, an influential economist at the Central University of Finance and Economics in Beijing, told Reuters that hitting 5% growth is crucial. “If growth is lower than 5%, it could affect job creation,” he said.

China targeted a budget deficit around 2.8% of gross domestic product, narrowing from last year’s goal of around 3.2%, while the quota for local government special bond issuance was set at 3.65 trillion yuan ($578 billion), flat from last year.