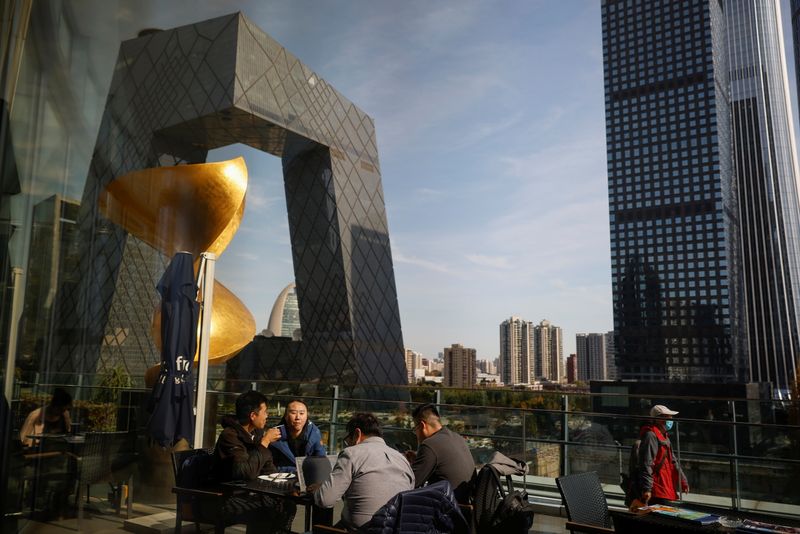 © Reuters. People eat lunch at a terrace restaurant near the CCTV building in the Central Business District (CBD) following an outbreak of the coronavirus disease (COVID-19) in Beijing

BEIJING (Reuters) – China’s economy is expected to grow at its weakest pace in over four decades even as it steadily recovers from a coronavirus-induced dive earlier this year, but overall output could rebound sharply in 2021, a Reuters poll showed.

The world’s second-biggest economy is now expected to expand by 2.1% in 2020, according to the median of 37 analysts surveyed by Reuters, down slightly from the 2.2% growth projected in the last poll in July.

That would make China the only major economy to grow in 2020, albeit at the slowest annual pace since 1976, the final year of Mao Zedong’s Cultural Revolution.

China’s economic recovery accelerated in the third quarter as consumers shook off their coronavirus caution, although the weaker-than-expected headline growth highlighted some persistent risks including from resurgent COVID-19 cases globally and ongoing tensions with the United States over a range of issues.

The poll forecast fourth-quarter GDP to rise 5.8% year-on-year, quickening from 4.9% in July-September.

Growth is projected to pick up to 8.4% in 2021, as the global economy is set to recover from the health crisis, according to the poll.

“With exports strong and domestic consumption and investment both improving, Q4 could be one of the best quarters for overall growth in a few years,” analysts at research firm Gavekal Dragonomics said in a note.

“Growth momentum should peak in the first half of 2021, though base effects will confuse the data readings.”

The economy has been recovering steadily from a steep 6.8% slump in the first quarter, when it was jolted by the pandemic.

But China faces long-term obstacles to maintain its ascent, analysts say. Its top leaders are holding a key meeting to chart the country’s economic course for 2021-2025, amid rising tensions with the United States on trade, technology and other fronts, threatening a decoupling of the world’s two largest economies.

China will strike a balance between stabilising economic growth and preventing risks, even as debt was allowed to temporarily rise this year to support the coronavirus-hit economy, central bank chief Yi Gang said last week.

The government has rolled out a raft of measures including more fiscal spending, tax relief and cuts in lending rates and banks’ reserve requirements to revive growth and support employment.

While the central bank stepped up policy support after widespread travel restrictions choked economic activity, it has more recently held off on further easing.

Analysts expect China will keep its one-year loan prime rate (LPR) steady at 3.85% until the end of 2021. The central bank kept the LPR unchanged for the sixth straight month at its October fixing, after cutting it by a total of 46 bps since last August.

The poll also predicted no change to the benchmark deposit rate until the end of 2021. The PBOC has kept it untouched at 1.5% since October 2015.

according to the poll.

(Polling by Shaloo Shrivastava and MD Manzer Hussain in Bengaluru and Jing Wang in Shanghai; Reporting by Kevin Yao; Editing by Shri Navaratnam)