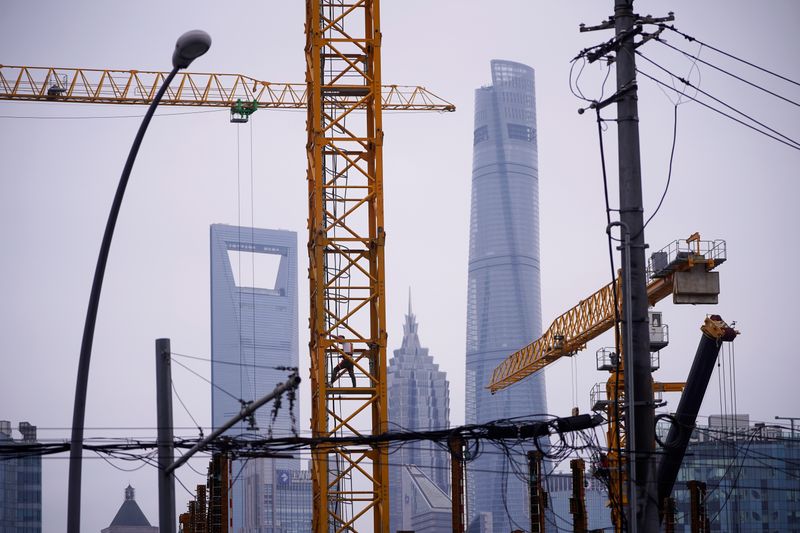 © Reuters. A worker is seen on a crane at a construction site in front of Lujiazui financial district, in Shanghai

By Gabriel Crossley and Kevin Yao

BEIJING (Reuters) – China’s economic recovery accelerated in the third quarter as consumers shook off their coronavirus caution, however, overall growth missed forecasts pointing to persistent challenges for one of the world’s few current engines of demand.

Gross domestic product (GDP) grew 4.9% in July-September from a year earlier, official data showed on Monday, slower than the median 5.2% forecast by analysts in a Reuters poll and following 3.2% growth in the second quarter.

“The rebound in Q3 GDP was less strong than expected, but was still a decent 4.9% YoY,” said Frances Cheung, head of macro strategy for Asia at Westpac in Singapore. “September data beat expectations, suggesting a pickup in momentum towards the latter part of Q3… The pickup in momentum was broad-based, which bodes well for the Q4 outlook.”

The world’s second-largest economy grew 0.7% in the first nine months from a year earlier, the National Bureau of Statistics (NBS) said.

Policymakers globally are pinning their hopes on a robust recovery in China to help restart demand as economies struggle with heavy lockdowns and a second wave of coronavirus infections.

China has been steadily recovering from decades-low growth seen in the first months of the year caused by coronavirus shutdowns.

On a quarter-on-quarter basis, GDP rose 2.7% in July-September, the NBS said, compared with expectations for a 3.2% rise and an 11.5% rise in the previous quarter.

But several recent indicators have pointed to a broader upturn in consumption as well in the third quarter.

Retail sales grew 3.3% in September from a year earlier, speeding up from a modest 0.5% rise in August and posting the fastest growth since December 2019. Industrial output grew 6.9% after a 5.6% rise in August, showing the factory sector’s recovery was also sustaining momentum.

The government has rolled out a raft of measures this year, including more fiscal spending, tax relief and cuts in lending rates and banks’ reserve requirements to revive the coronavirus-hit economy and support employment.

While the central bank stepped up policy support earlier this year after widespread travel restrictions choked economic activity, it has more recently held off on further easing.

The International Monetary Fund has forecast an expansion of 1.9% for China for the full year, the only major economy expected to report growth in 2020.

China’s retail spending has lagged the comeback in factory activity as heavy job losses and persistent worries about infections keep consumers at home, even as restrictions lifted.

However, the third quarter saw several signs of a consumption recovery.

Domestic passenger flights in September, meanwhile, beat their COVID-19 levels, indicating that the sector was approaching a full recovery.

The COVID-19 pandemic, which caused China’s first contraction since at least 1992 in the first quarter, is now largely under control, although there has been a small resurgence of cases in the eastern province of Shandong.