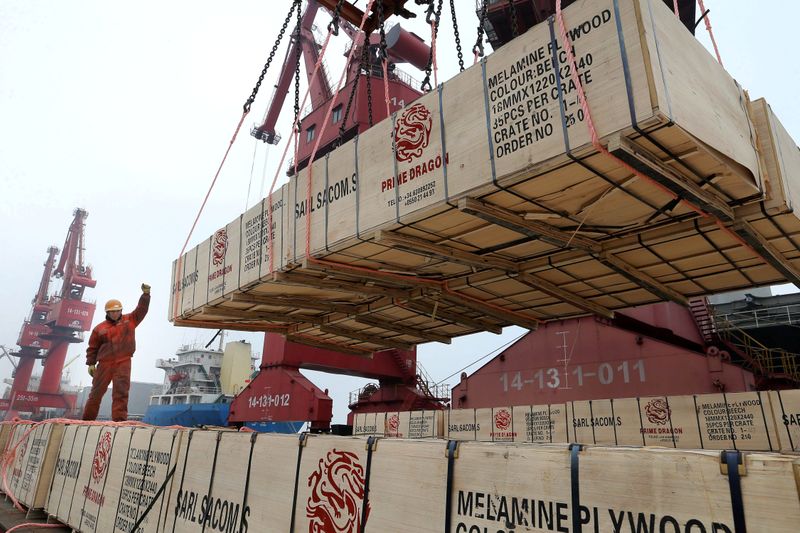 © Reuters. Worker gestures as a crane lifts goods for export onto a cargo vessel at a port in Lianyungang, Jiangsu

BEIJING (Reuters) – China’s exports and imports are expected to rise at a faster pace in November, helped by strong demand and coronavirus-related disruptions at factories in other countries, a Reuters poll showed on Friday.

Exports are expected to have risen 12% from a year earlier, according to a median estimate of a Reuters poll of 24 economists, quickening from an 11.4% gain in October.

Booming sales of fridges, toasters and microwaves to households across the locked-down world have helped propel China’s mammoth manufacturing engine back to life, super-charging demand for key metals like steel, and aluminium, after a sharp slump early in the year.

China’s trade surplus is expected to have narrowed a bit to $53.5 billion in November from $58.44 billion in October, according to the poll. The data will be released on Monday.

“The substitution effect of China’s exports will continue to increase as supply capacity of emerging economies has not recovered yet.”

But some analysts cautioned that surging infections and fresh lockdowns in some of its key trading partners could dent demand for Chinese goods.

A sharp appreciation of the yuan currency in recent months could also cloud the outlook for exporters. Some firms reported that a strong yuan squeezed profits and reduced export orders in November, the statistics bureau said this week.

The yuan has booked six straight months of gains, its longest such winning streak since late 2014, and is trading at 2-1/2 year highs. [CNY/]

UBS forecast China’s GDP growth would rebound to 8.2% in 2021, led by exports and domestic consumption. They expect exports to grow by 11% to 12% as the global economy recovers from recession, helped by rapid vaccine development.

EU will launch Recovery Fund regardless of vetoes if necessary: Gentiloni By Reuters