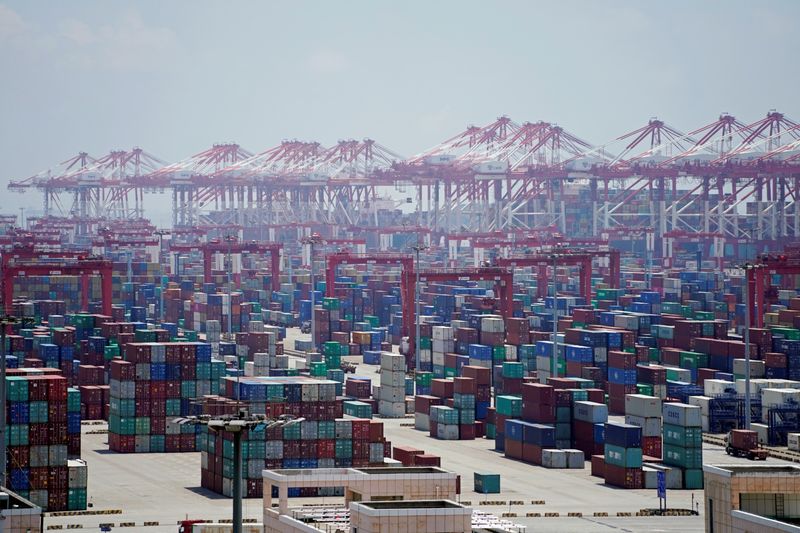 © Reuters. Containers are seen at the Yangshan Deep Water Port in Shanghai

BEIJING (Reuters) – China’s exports likely posted a fourth straight month of gains in September as more trading partners reopened their economies, a Reuters poll showed, while imports are also expected to have edged back into growth.

Exports have not been as severely affected by the global slowdown as some analysts had feared, due in part to record shipments of medical supplies and robust demand for electronic products, adding to hopes for a sustained economic recovery.

In September, exports are expected to have risen 10% from a year earlier, according to a median estimate of a Reuters poll of 24 economists. Imports likely rose 0.3% on year, improving after back-to-back decline in July and August.

Exports in August rose a solid 9.5% year-on-year, the strongest gain since March 2019.

Stronger exports could signal a faster and more balanced recovery for the Chinese economy, which is rebounding from a record first-quarter slump thanks to domestic stimulus measures.

A manufacturing survey showed total new orders in September recorded the strongest increase since January 2011, and a gauge for new export orders–which were hit hard by the global outbreak of the coronavirus–rose at the fastest pace in over three years.

“We expect both export and import growth to accelerate further in September. Global growth has continued to recover and strong global housing activity in recent months should support Chinese exports of furniture and appliances,” Goldman Sachs (NYSE:) analysts said in a research note last week.

“Import growth may improve in September as well on the back of the solid expansion of domestic activities,” they said.

However, external demand could suffer if virus control measures are re-imposed by trade partners due to a resurgence in infections.

China is meanwhile looking to reduce its reliance on overseas markets for development as U.S. tensions and the pandemic increase external risks that could hamper long-term progress.

Already heightened U.S.-China hostilities are expected to escalate ahead of the U.S. presidential election next month.