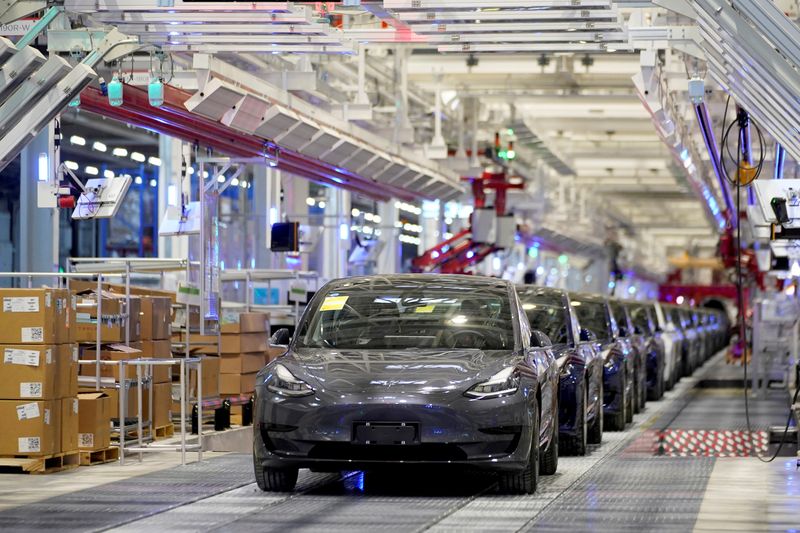 By Gabriel Crossley and Kevin Yao

BEIJING (Reuters) – China’s factory output rose faster-than-expected in October and retail sales sped up, as the recovery in the world’s second-largest economy from its COVID-19 slump gathered momentum.

Industrial production climbed 6.9% in October from a year earlier, data from the National Statistics Bureau showed on Monday, in line with September’s gain and faster than the 6.5% rise expected in a Reuters poll of analysts.

The upbeat figures came as other Asian powerhouses also climbed out from their pandemic depths with Japan’s economy reporting its fastest quarterly growth on record.

China’s industrial sector has staged an impressive turnaround from the pandemic paralysis seen earlier this year, helped by resilient exports. Now, with the coronavirus largely under control in China, consumers are opening up their wallets again in a further boost to activity.

“The latest data suggest that the broad-based acceleration of China’s economy continued in October,” Julian Evans-Pritchard at Capital Economics said in a note.

Across China, smelters and refineries ramped up production in October with aluminium and hitting record output levels as the reopened economy stoked demand.

Growth is expected to accelerate in the fourth quarter as the service sector recovery maintains momentum, Fu Linghui, spokesman of the National Statistics Bureau said, told reporters at a briefing.

In the consumer sector, retail sales rose 4.3% on-year, missing forecasts for 4.9% growth but still the fastest growth this year.

The improved appetite for spending was seen with China’s auto sales growing 12.5% in October, thanks to surging demand for electric vehicles.

Fixed-asset investment rose 1.8% in January-October from the same period last year, compared with the 1.6% growth forecast and a 0.8% increase in the first nine months of the year.

China’s consistent run of improving data since the second quarter and recent comments from officials have prompted speculation the central bank may start to tighten policy.

But analysts say policymakers are unlikely to rush winding down existing stimulus amid persistent uncertainties about the pandemic and global demand.

The government has rolled out a raft of measures including more fiscal spending, tax relief and cuts in lending rates and banks’ reserve requirements to revive the economy.

Property investment was a key driver of broader spending with October real estate investment up 12.7% from a year ago, the fastest pace since July 2018 and quickening from 12% seen in September, according to Reuters calculations based on NBS data.

Property sales by floor area rose a solid 15.3%, the highest in over three years, while new construction starts expanded 3.5%, improving from last month’s fall of 1.9%.

However, government efforts to prevent bubbles in the property sector are gaining traction with Chinese new home prices growing at a slower monthly pace in October amid restrictions imposed in some big cities.

Private sector fixed-asset investment, which accounts for 60% of total investment, fell 0.7% in January-October, compared with a 1.5% decline in the first nine months of the year.

While China’s economic recovery looks to be accelerating, surging coronavirus infections in Europe and the United States have clouded the outlook for exports.

Analysts believe a Biden administration is likely to maintain a tough political stance on Beijing, keep tight restrictions on China’s access to advanced technology, although it could act in a less aggressive and more predictable way than the Trump administration.

China’s economy grew 4.9% in the third-quarter from a year earlier, but annual growth could slow to just over 2% for 2020. That would be the weakest in over three decades but still much stronger than other major economies.