China’s euro-denominated bond issue last Wednesday met with strong demand, getting €18 billion in orders for the €4 billion bond sale as it priced the 5-year tranche for a negative yield for the first time.

As the only major economy forecast to grow this year amid the COVID-19 pandemic, China has been tapping international markets more often, catering to investor demand for exposure to its economy. Forecasts put China’s growth at about 1.9-2% this year.

Diversification Away From The USD

Beijing came out with its first euro-denominated bond last year, raising €4 billion. Last month, it sold $6 billion of bonds, bringing its total dollar borrowings over the past four years to $27 billion. But the euro issues play a crucial role as China seeks to diversify its borrowing away from the .

China had been skittish about negative yields but bankers say they worked hard to educate officials. European investors, for their part, are all too familiar with the phenomenon.

The five and 10-year tranches went primarily to central banks and sovereign wealth funds, according to reports. The 15-year bonds were bought largely by asset managers, pension funds and insurers.

Foreigners have also been snapping up China’s -denominated debt, especially as major indices have started including the bonds. Foreign holdings of Chinese bonds are about 3 trillion yuan, equivalent to nearly $460 billion.

China’s finance ministry was certainly not averse to taking advantage of the low euro interest rates. 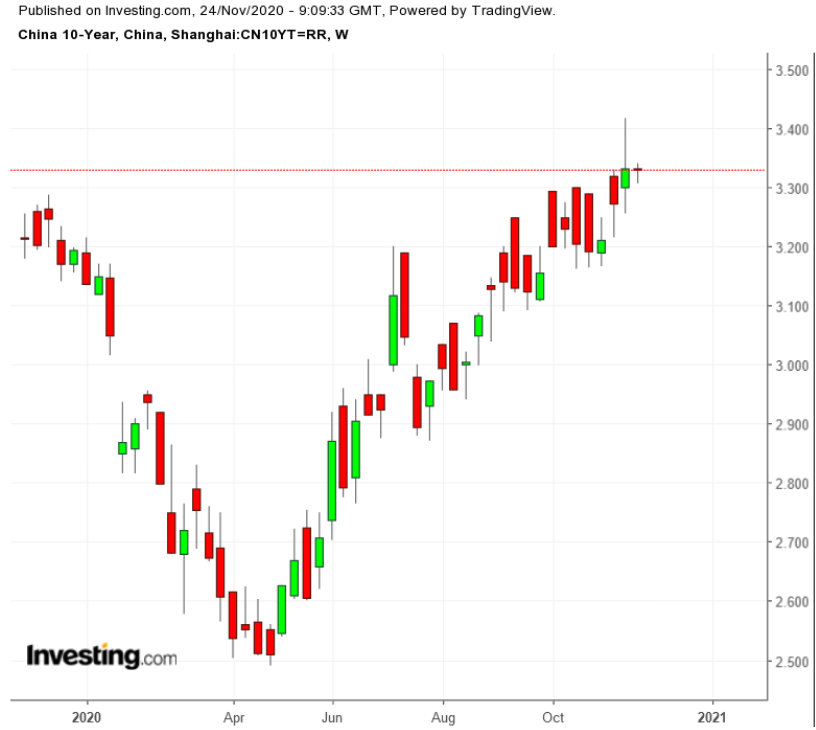 The current yield on the yuan bonds is about 3.3%, a multiple of 0.318% on the 10-year tranche of last week’s euro-denominated bond.

The Chinese offering took place against a background of nervous bond markets. about COVID-19 vaccines offset about the expiration of Federal Reserve lending facilities in the US and further delays in the EU recovery package due to vetoes from Hungary and Poland.

US Treasuries, while higher than the sharp dip after the Nov. 3 election, are hardly stratospheric. The failure of Republicans and Democrats in Congress to reach a compromise on fiscal stimulus is putting greater pressure on the Fed to increase its own bond purchases.The prospect of increased asset purchases from the European Central Bank, which are now virtually certain to be approved in December, is keeping pressure on yields of eurozone government bonds. 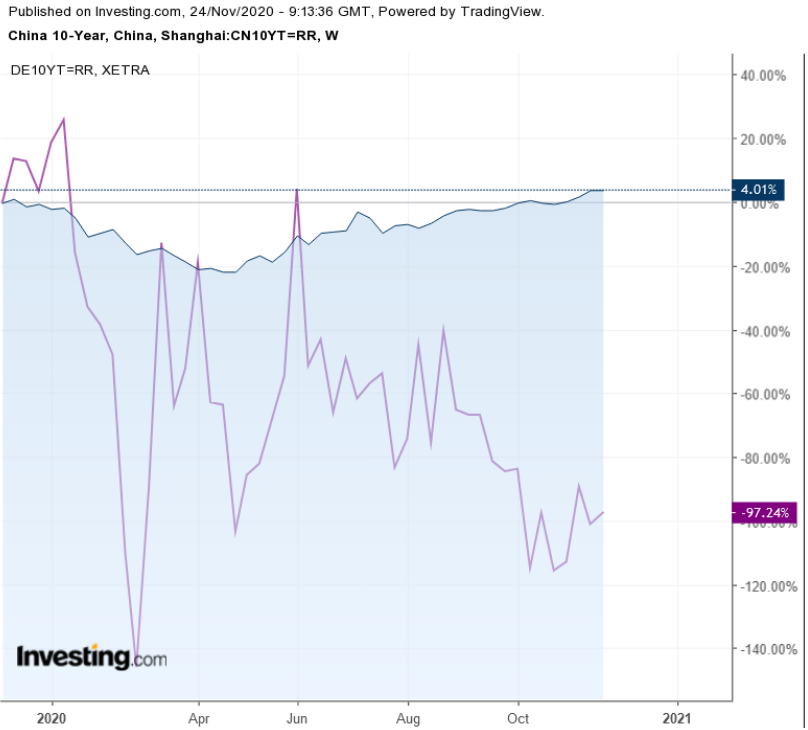 The benchmark German bond is flirting again with yields approaching minus 0.60%.

While successful vaccine trials are showing a light at the end of the tunnel, Fed policymakers see a choppy outlook several months ahead. The ongoing fracas over the US election results—and especially the two Senate runoff votes in Georgia that will determine control of the upper house and the ability of Republicans to brake Democratic initiatives—makes a congressional stimulus package even less likely.

The news of a third successful vaccine trial from Astra Zeneca did boost Treasury yields on Monday, as the note rose slightly to about 0.85% on optimism that vaccines could be available already in December.

The publication later this week of the from the meeting of the Federal Open Market Committee meeting in early November may provide clues about Fed intentions regarding asset purchases.