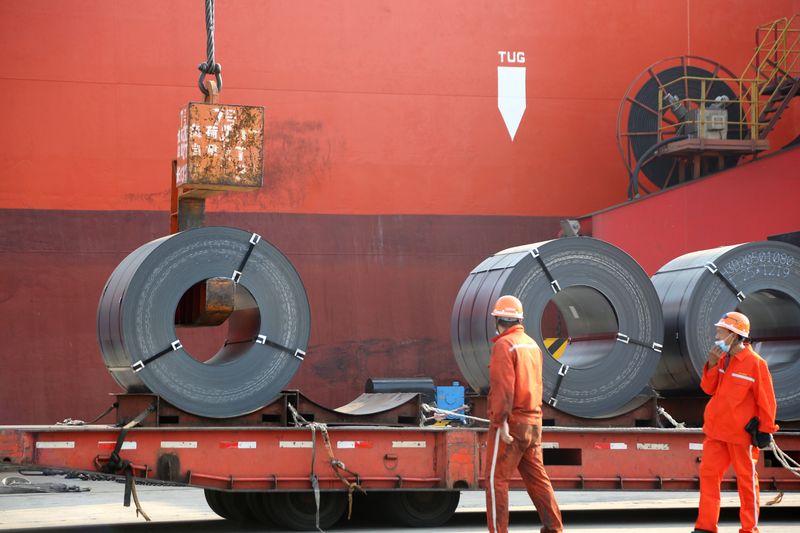 © Reuters. Workers load steel products for export to a cargo ship at a port in Lianyungang

BEIJING (Reuters) – Profits at China’s industrial firms grew in October for a sixth consecutive month and at their quickest pace since early 2017, pointing to a steady recovery in the manufacturing sector after it was hard hit by the COVID-19 pandemic.

Profits at Chinese industrial firms surged 28.2% year-on-year in October to 642.91 billion yuan ($97.79 billion), National Bureau of Statistics (NBS) data showed on Friday, after rising 10.1% in September versus the previous year.

That was the biggest monthly profit growth since Jan-Feb 2017. The NBS combines the results for January and February to exclude distortions caused by the week-long Lunar New Year.

Zhu Hong, a senior statistician at the NBS, said the sharp jump was helped by rising investment income. It also came from a low base in October 2019, Zhu said.

China’s industrial sector has seen an impressive recovery from the coronavirus fallout, helped by resilient demand for the country’s exports. Premier Li Keqiang said on Tuesday he expects Chinese economic activity to return to a reasonable range next year.

For the January-October period, industrial firms’ profits rose 0.7% on an annual basis, after falling 2.4% in the first nine months of 2020 compared with the same period last year.

That growth was driven by the equipment manufacturing and the electronic sectors, while the auto manufacturing sector also saw a steady recovery in profits, Zhu said in a statement.

Liabilities at industrial firms rose 6.8% on-year at end-October, versus a 6.6% growth as of end-September.

Earnings at China’s state-owned industrial firms were down 7.5% on an annual basis for the first ten months, compared with a 14.3% on-year decline in the January-September period, the statistics bureau data showed.

Private sector profits grew 1.1% on-year in the January-October period, compared with a 0.5% decline in the first nine months.

The industrial profit data covers large firms with annual revenue of over 20 million yuan from their main operations.