Home Economy Cities Awash in Rescue Cash Seek to Use It to Pay Down... 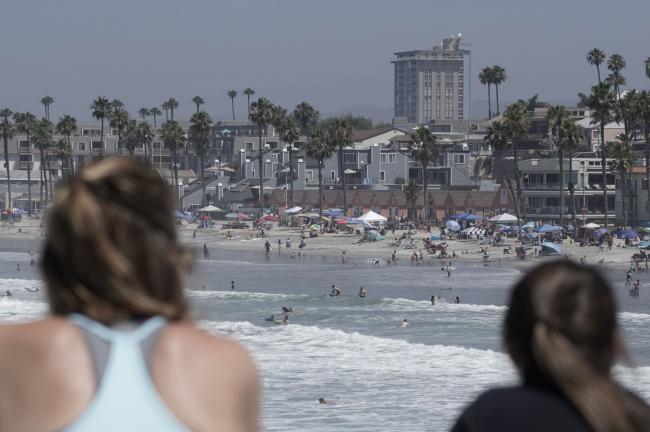 © Bloomberg. Visitors at the beach in Oceanside, California.

(Bloomberg) — America’s states and cities are receiving $350 billion from Washington, an unprecedented move to head off a fiscal crisis that could have derailed the economic recovery.

But at least two dozen local governments and lobbying groups are pushing President Joe Biden’s administration to allow the federal funds to be used for something the Treasury Department hadn’t envisioned: paying down debt or socking it away.

Among them is Oceanside, a 176,000-person city on the Southern California coast. Michael Gossman, assistant city manager, wants to be able to use the federal aid to replenish reserves drawn down last year so the city could increase services for the homeless and deliver meals to the elderly during the pandemic.

“It’s not that we’re asking for a blank check,” he said.

The push shows a small rift that’s opened as the economy surges back from the pandemic, saving governments from facing the type of crippling budget deficits that lingered for years after the last recession. With their finances broadly on the mend, some officials want to use it to replenish depleted savings accounts or pay off debt run up last year to stay afloat as much of the nation shut down. That’s put them at odds with Treasury regulations seeking to ensure the funds are plowed back into the economy.

Marc Goldwein, senior vice president for the Committee for a Responsible Federal Budget, a nonpartisan think tank, said push-back against the administration’s rules reflect the fact that governments were given more “than they know what to do with.”

Yet “it’s totally consistent with the spirit of the law to say states can’t tuck this money away,” he said.

Overall, states and cities have been eager to put the aid to work, using it to fund direct relief for small businesses, upgrades to water and sewer infrastructure, and even local experiments with universal basic income. And the wide range of spending on which the aid can be used can easily free up locally generated funds for paying down debt or bolstering savings. Both Illinois and New Jersey, for example, have used unexpectedly large tax collections to chip away at their debts.

Even so, cities including Philadelphia and lobbying groups like the National League of Cities have asked the Biden administration to relax some of the restrictions. Treasury officials could make changes to its rules after accepting comments that are due Friday.

The Treasury’s initial guidance emphasizes potential uses of the money like rehiring workers and helping lower-income and minority communities hardest hit by the pandemic. It also included a variety of restrictions, including a ban on using it to offset tax cuts. Those rules were designed to encourage states and cities to spend the money quickly, said Dan White, director of public sector research for Moody’s Analytics.

Putting the money in rainy day funds is “not going to do anything to increase GDP or job growth today,” White said.

It’s unclear how much of an economic impact it would have if the Treasury rolled back some of the limits. But many governments sold debt in the early days of the pandemic as they prepared for tax revenues to tumble. In the second half of 2020, for example, at least one quarter of state and local government debt sales over $100 million included a material element of deficit financing, according to Municipal Market Analytics.

“We had to balance our books. We had to issue debt,” said Gary Dickson, town supervisor for West Seneca, New York, which took out a loan of $600,000 last year.

While he said the aid is “fungible,” giving the town flexibility to pay off the loan with other funds, loosening the restrictions would make things easier, he said.

Philadelphia’s finance director, Rob Dubow, told Treasury that helping local governments rebuild their finances would prepare them for the next economic downturn, according to a letter to the department. Philadelphia, which drew heavily on reserves during the pandemic, is projecting that its general-fund balance will fall to a surplus of $78.7 million from $438 million before the pandemic, according to a city spokesperson.

Rebecca Rhynhart, the city’s controller, wants part of the rescue funds earmarked for future tax shortfalls. She said other funds should be used for combating gun violence, reducing poverty, addressing the opioid epidemic and business growth.

“We need to make sure we are fiscally sound,” she said. “At the same time, significant amounts of money needs to be used for investments to tackle these challenges.”

Chicago has seen a political debate over how to best divvy up the aid. Before the Treasury rules were released, Mayor Lori Lightfoot’s administration floated using it to pay down a loan taken to help close a nearly $800 million deficit and cancel a debt refinancing plan, which together would take up almost half of the $1.9 billion in recovery funds the city expects to receive.

She’s faced pressure from progressive politicians like Alderwoman Rossana Rodriguez Sanchez, who said it would be a waste to pay down debt given a spike in violence and an uneven recovery that’s leaving behind people of color and lower-income communities.

“This is the moment to make an argument for the massive injection of resources,” she said.