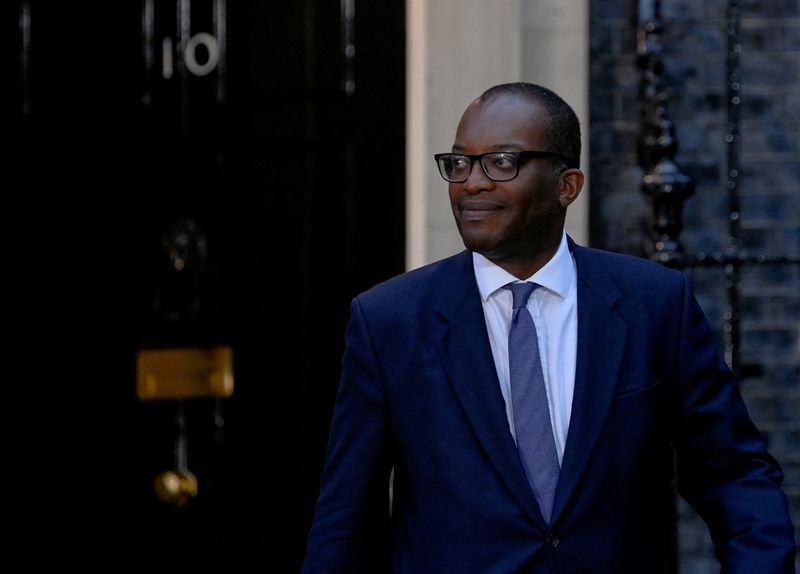 LONDON (Reuters) – Investor confidence in British assets sits on the edge of a precipice as new finance minister Kwasi Kwarteng readies his first fiscal update, a Reuters poll of bond strategists and economists showed on Tuesday.

Kwarteng is due on Friday to outline his plans to support households and businesses through the coming winter, an event investors say will be a critical test of confidence in Britain’s economy and public finances.

Slightly more than half – 55% – of the international banks and research consultancies polled by Reuters last week said there was a high risk confidence in British assets would deteriorate sharply in the coming three months.

While currencies all over the world have fallen against a surging dollar and rising inflation has hammered government bonds prices everywhere, Britain has suffered worse than most.

The pound lost 7.0% of its value against the dollar during the three months to Tuesday, one of the worst performers of 10 major currencies.

Ten-year government bond prices have fallen much further in Britain over the same period than in France, Germany, Italy and the United States – something that cannot be explained away by currency movements alone.

These shifts in part reflect investors’ worry that Britain’s reliance on imported energy will leave it exposed to higher inflation for longer.

But there are also doubts about the economic agenda of new Prime Minister Liz Truss, who has announced a hugely expensive plan to subsidise energy bills in combination with tax cuts – policies which have yet to be costed.

“Trust is fleeting… and Truss would be wise to reassure markets that she has a plan to pay for these expenditures,” said Rabobank strategist Bas Van Geffen.

Kwarteng, appointed as chancellor of the exchequer this month, has defended the new government’s plans, saying Britain has more room to borrow than other countries that have a higher share of public debt to economic output.

Kick-starting growth is the best way to get stronger tax revenues which will restore the public finances over the medium term, he says – although some economists warn this approach recalls the ill-fated, inflationary policies of the 1970s.

“There has already been a clear deterioration in investors’ outlook on the UK, so the bar for further sharp deterioration is high,” said Adam Dent, strategist at Santander (BME:).

“But the new, inexperienced government faces great challenges and could easily make missteps which add to investors’ concerns.”

Some respondents pointed to a difficult global economy and said Britain was not alone in its challenges.

“We see investor sentiment looking frail across many regions and asset markets. Nonetheless, the UK does look a little more vulnerable than most,” said James Knightley, economist from ING.

The poll suggested the 10-year British government bond yield – which touched an 11-year high of 3.292% on Tuesday – could be close to a peak, with the median forecast pointing to a move below 3% in three months’ time.

“We believe monetary policy tightening, particularly in the U.S., could be rapidly reversed through the second half of 2023, prompting a plunge in longer dated yields next year,” Dent from Santander said.

Still, 86% of forecasters – Dent included – said the risks to their yield forecasts for global government bonds were skewed to the upside. [US/INT]

(For other stories on major government bond yields and money market rates:)