Depending on the slice of the Treasury market, inflation expectations are rebounding—or the outlook for economic growth is weakening. One of these implied forecasts is probably wrong, or least less useful for estimating future macro risks. Higher inflation and softer economic growth isn’t impossible (think “stagflation” in the 1970s). But it’s not yet obvious that the conditions that produced that malaise are recurring, and so the odds still favor one scenario at the expense of the other.

For some perspective, let’s start with the market’s inferred inflation outlook, based on the yield spread for nominal Treasuries less their inflation-indexed counterparts. Using the and maturities as a guide, the market’s assumptions about the future path of inflation has recovered to pre-coronavirus-crisis levels. That works out to roughly 1.5% for the 5-year notes and a bit higher for the 10-year maturities. 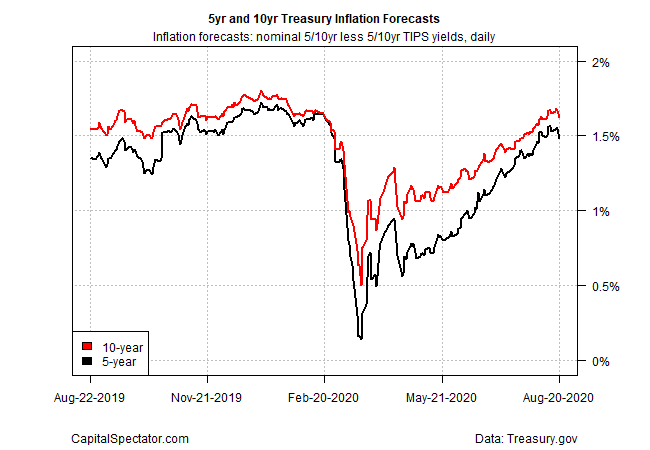 A 1.5% inflation rate is hardly worrisome, at least relative to the Fed’s 2.0% target or the long-term historical record. In fact, it’s reassuring relative to the dive during the darkest weeks of the pandemic, when the 5-year maturities were pricing in inflation as low as 0.14% at one point. If the goal is to keep deflation at bay without unleashing “high” inflation, official inflation data of late is encouraging.

Mr. Market has rethought his former fear that zero inflation or lower is a high-risk scenario, but it’s not yet obvious that something more than a subdued pace of inflation is near.

Official inflation gauges have also rebounded from the recent dive but here too the trend remains soft. The annual pace for core consumer prices, for example, has bounced a bit after the recent slide, but the 1.6% year-over-year rate in July hardly looks like a warning sign that inflation is set to explode to the upside. 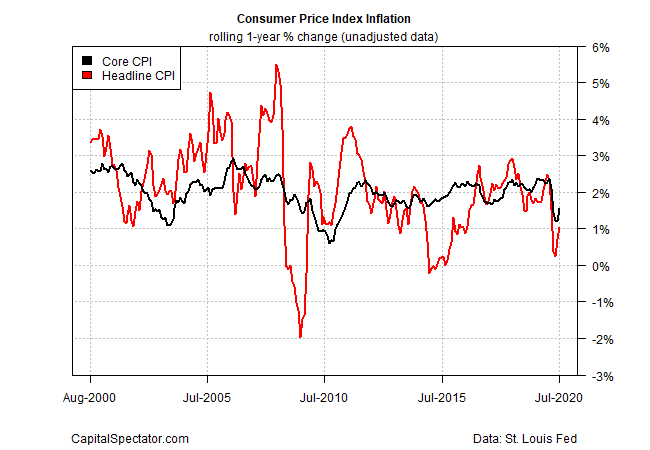 That doesn’t stop inflation hawks from warning that the risk is rising that pricing pressure will soon heat up. The basis for this forecast: extraordinary monetary and fiscal stimulus, in the U.S. and abroad, will inevitably lift inflation, perhaps to relatively lofty heights by the standards of recent decades.

No one should dismiss this risk, at least not entirely. But for the moment, it’s not clear that the stimulus is being injected into the economy. Instead, the recent surge in the personal savings rate suggests that consumers are banking government payouts rather than going on spending spree. 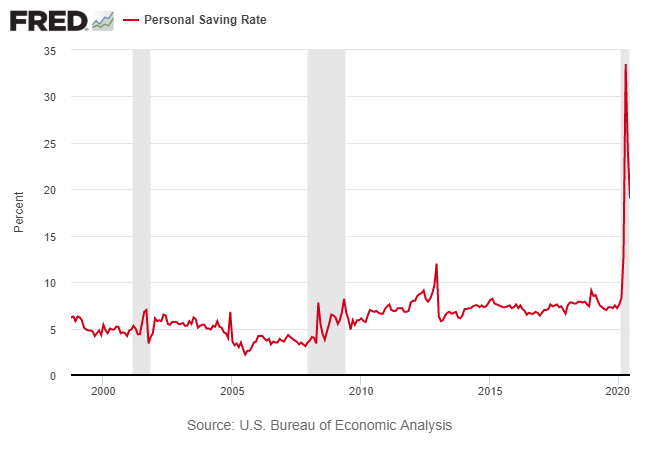 The ongoing slide in the velocity of M2 money supply—a measure of how frequently money is spent on goods and services—also points to a deceleration in inflation risk. Indeed, the decline of this indicator in recent decades has accelerated during the pandemic, suggesting that any inflationary pressures, if they arise at all, will be short-lived for the foreseeable future. 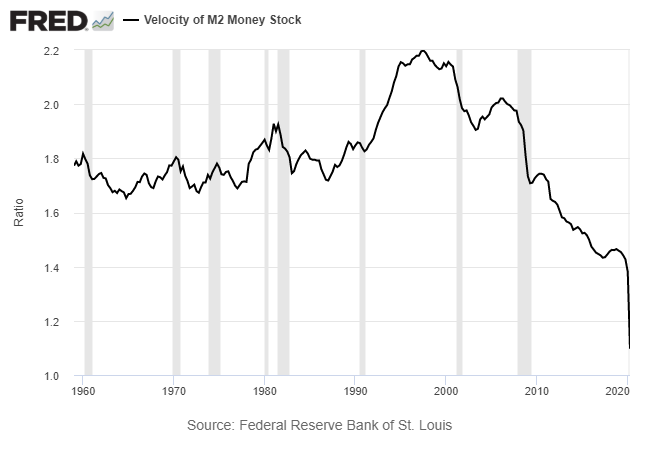 To be fair, U.S. retail spending has bounced back and in July sales rose above the pre-coronavirus peak. Payrolls are also recovering, although the huge increases in every week are a warning sign that the labor market remains vulnerable. “The labor market is a long way from being healthy,” advises Nancy Vanden Houten, lead U.S. economist at Oxford Economics, in a research note.

One corner of the Treasury market that’s issuing a clear warning: real yields have turned deeply negative, based on inflation-indexed Notes. The 5-year TIPS yield, for instance, is currently -1.22% (Aug. 20), which is widely seen as the market’s expectation for weak economic growth at best. 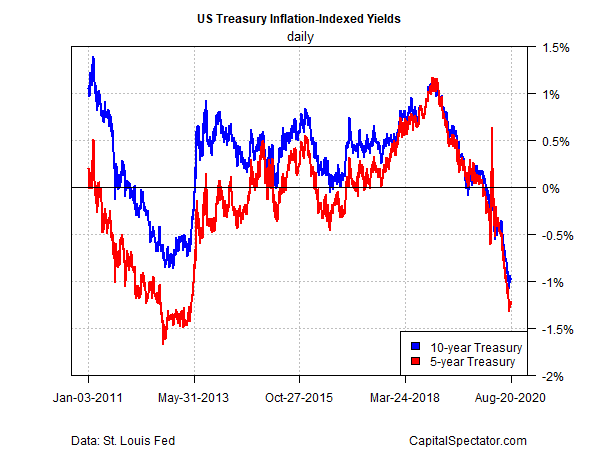 For some analysts, the possibility that inflation will soon rise, forcing the Federal Reserve to raise interest rates, if only slightly, animates certain corners of the investment community. As a market signal for monitoring the central bank’s willingness to lift rates, keep an eye on the 2-year Treasury yield, which is widely viewed as a gauge of market expectations on policy changes.

By that standard, there’s room for debate on whether the market is pricing in higher rate-hike odds. The Fed has been clear in its communications that it intends to keep its target rate near zero for the foreseeable future. But the 2-year yield isn’t completely on board with that forecast, or it appears.

Notably, the , at 0.52% on Thursday (Aug. 20), is close to a two-year high. Despite the coronavirus blowback, this rate has remained surprisingly firm and the rebound that began in mid-2019 appears appears to be intact.

Economic data will likely determine what happens next. Unfortunately, the level of uncertainty is higher than usual, thanks to the coronavirus. Although the macro trend overall continues to reflect a rebound persisting in July, all eyes are turning to the incoming August data as a stress test. The key question: has a new economic expansion started? Or is this a dead-cat bounce? The updates in the weeks ahead may provide some much-needed clarity.