Cosmos’ token looked like it could experience a correction as technicals turn bearish.

Cosmos looked like it was on the cusp of losing a crucial support level that could lead to significant losses. The pessimistic outlook for ATOM was further validated by a technical indicator and a bearish pattern developing on the token’s 12-hour chart.

Cosmos looked primed to incur losses over the weekend as multiple bearish signals have appeared.

The interoperability network’s ATOM token had enjoyed a significant rally over the last week. The 20th-largest cryptocurrency by market cap surged by more than 60% since Feb. 24. Now, it looked like Cosmos was bound for a spike in profit-taking that could trigger a steep decline.

The recent upward price action appeared to have led to the formation of a rising wedge on ATOM’s 12-hour chart. As Cosmos moved closer to the pattern’s apex, it could be preparing to break through support. A decisive close below the wedge’s lower trendline could result in a 14.4% correction toward $28.

The Tom DeMark (TD) Sequential indicator added credence to the pessimistic outlook. It was presenting a green nine candlestick on ATOM’s 12-hour chart, which was considered a sell signal. An increase in selling pressure could validate the bearish formation, resulting in a one to four 12-hour candlesticks retracement. 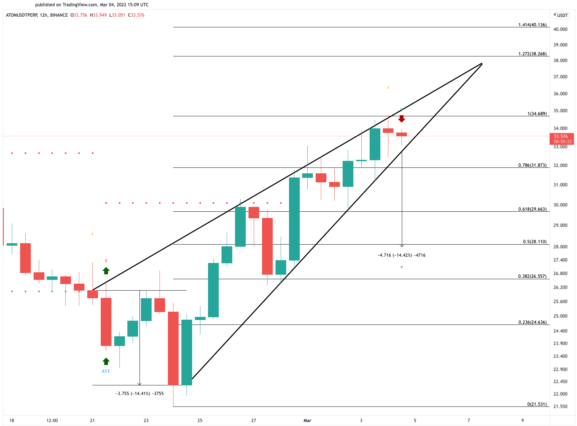 It was worth noting that while the odds appeared to favor the bears, ATOM could have a chance to invalidate the optimistic thesis.

The Fibonacci retracement indicator, measured from ATOM’s low at $21.50 on Feb. 24 to its high at $34.70 on Mar. 4, suggested that a decisive 12-hour candlestick close above the recent high of $34.70 could give ATOM the strength to advance higher. In this eventuality, the asset could rise toward $38 or even $40.