Equities around the globe rallied yesterday after Pfizer Inc. (NYSE:) and BioNTech SE (NASDAQ:) said that their experimental vaccine was more than 90% effective in preventing COVID-19. The news came on top of Joe Biden’s victory in the US elections and helped and hit new record highs.

As for tonight, during the Asian morning Wednesday, the RBNZ . We don’t expect any policy changes, thus, we will look for clues and hints with regards to officials’ future plans.

The US traded mixed against the other G10 currencies on Monday and during the Asian morning Tuesday. It gained against CHF, JPY, , and AUD in that order, while it underperformed versus NOK and NZD. The greenback was found virtually unchanged against , , and . 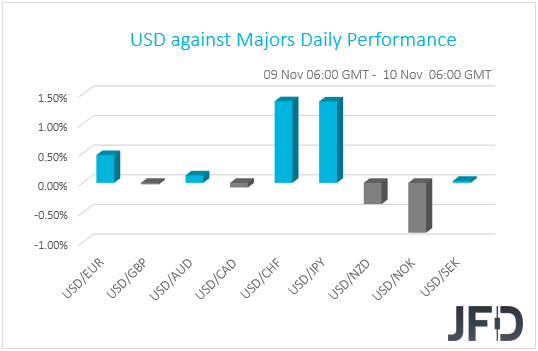 The weakening of the safe-havens and , combined with the strengthening of the oil-related and the risk-linked , suggests that markets continued trading in a risk-on manner. Indeed, major EU indices skyrocketed on average 6.26% each, while in the US, both the Dow Jones and the S&P 500 gained 2.95% and 1.17% respectively, hitting new intraday records. On the other hand, the tech-heavy slid 1.53%. 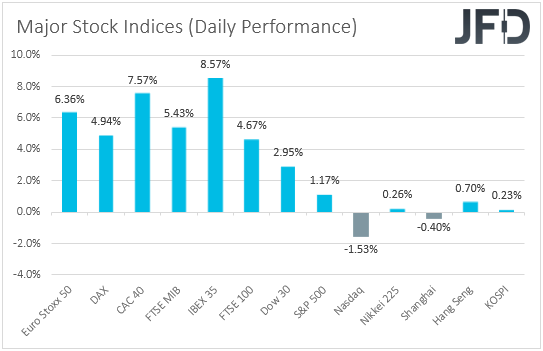 The rally in most equities came after Pfizer. and BioNTech said that their experimental vaccine was more than 90% effective in preventing COVID-19. Sectors which were hit the hardest by restrictive measures aimed at curbing the virus, like energy, travel and financials, were among the biggest gainers, with prices surging as well on expectations that demand would rise again, as people may become more comfortable with the idea of traveling soon. On the other hand, stocks that outperformed during the pandemic, like Netflix (NASDAQ:), Amazon (NASDAQ:), and Zoom (NASDAQ:), fell sharply. That’s why NASDAQ was the only US index to close in negative waters.

Equity indices around the globe were already trending north on expectations that US President-elect Joe Biden will adopt a softer stance than Trump in handling the trade relationships of the US with the rest of the world. US indices were also on the rise, as a Republican-controlled Senate may not allow Biden to proceed with increasing corporate taxes and tightening regulations.

As for our view, it is still too early to start cheering that the COVID-era is behind us. There are still many questions with regards to the vaccine to be answered, such as how effective is by age or how long immunity could last. That may have been the reason behind the profit-taking correction we saw a few hours after the rally triggered by the positive vaccine news.

Having said all that though, we are a step closer than yesterday in finding the cure for this virus, which combined with Biden’s victory, may allow investors to jump back into the action and push risk-linked assets back up. We would treat any further declines as a corrective pullback of the broader uptrend.

Yesterday, the index moved sharply to the upside, breaking above its medium-term downside resistance line taken from the high of July 21. The price came very close to testing the highest point of July, at 3450, but retraced back down a bit. Although, at some point, we might see a bit of a correction lower, overall, we will continue aiming higher.

Another push higher could bring the price to the above-mentioned 3450 barrier, which might be seen as a strong resistance area for a while. If so, the index may correct slightly lower, but if it is able to stay somewhere above the aforementioned downside line, that could keep the bulls interested. The buyers might then raise Euro Stoxx 50 again and if this time the 3450 hurdle surrenders, the next possible target may be the 3527 level, marked by the high of Feb. 27.

In order to shift our attention to some lower areas, we would prefer to wait for a drop back below the previously discussed downside line and below the 3222 zone, which is marked near the highs of Nov. 5 and 6. The bulls might flee the field and allow more bears to join in. Euro Stoxx 50 could travel to the 3132 obstacle, a break of which might set the stage for a move to the 3013 level, marked by the low of Nov. 4.

As for tonight, during the Asian morning Wednesday, the RBNZ decides on monetary policy. When they last met, policymakers of this Bank kept their Official Cash Rate (OCR) and their Large-Scale Asset Purchase (LSAP) program unchanged, repeating that further monetary stimulus may be needed in the foreseeable future, including a Funding for Lending Program, a negative OCR, and purchases of foreign assets. 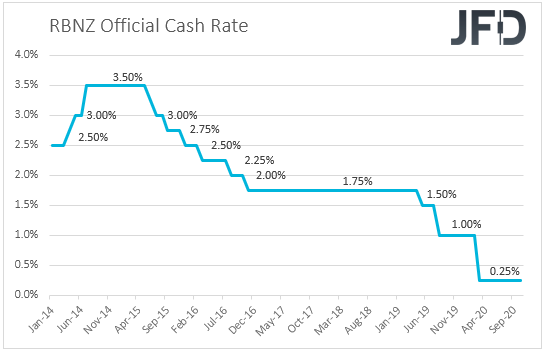 That said, a few weeks ago, RBNZ Assistant Governor Christian Hawkesby said that some economic data has surprised to the upside, reducing the chances for the adoption of negative interest rates by this Bank. However, he added that the discussion of negative rates is “not a game of bluff”, keeping the prospect well on the table. With that in mind, we don’t expect the Bank to act at this gathering, but we do expect it to keep the prospect of further easing well on the table. Officials’ willingness to take interest rates into the negative territory if needed may hurt somewhat the Kiwi, but we expect the currency to stay mostly linked to developments surrounding the broader market sentiment. If the risk-on trading due to the COVID vaccine news and due to outcome of the US elections continues, any RBNZ-related slide may stay limited and short-lived, with the risk-linked currency rebounding and extending its latest short-term uptrend.

had a good run to the upside, yesterday, moving further away from its short-term upside support line drawn from the low of Oct. 20. The pair found some resistance near the 0.6246 barrier, which is an intraday swing low of June 8th and marked by an intraday swing high of June 9. Even though we might see a bit of a correction lower, still, if the above-mentioned upside line remains intact, we will stay positive, at least with the near-term outlook.

If the 0.6246 barrier continues to provide some resistance for now, we might see the rate correcting a bit lower. However, if the pair stays above the aforementioned upside line, the bulls could step in and try to take back control. If so, NZD/CHF may climb higher again, break the 0.6246 hurdle and aim for the next possible resistance area, at 0.6298. That area is the highest point of June.

Alternatively, if the previously-mentioned upside line breaks, that could spook the bulls from the field. NZD/CHF may then get picked up by more bears, who could drive it to the 0.6090 obstacle, or to the 0.6062 zone, marked by the low of November 4. The pair might rebound somewhat from zone, but if it can’t move back above the aforementioned upside line, another slide might be possible. The rate may drift back to the 0.6062 obstacle, a break of which could open the door for a move towards even lower areas. That’s when we will aim for the 0.6037 hurdle, or the 0.6008 level, marked by an intraday swing low of Oct. 21.

As For Today’s Events

During the early European morning, we already got the UK for September. The unemployment rate rose to 4.8% from 4.5%, but both the including and excluding bonuses earnings rates rose by more than anticipated.

From Germany, we have the ZEW survey for November. Both the current conditions and economic sentiment indices are expected to have declined, to -65.0 and 40.0 from -59.5 and 56.1. At its latest meeting, the ECB noted that in December, the new macroeconomic projections will allow a thorough reassessment of the economic outlook and that the Governing Council will recalibrate its instruments as appropriate. In other words, the ECB is very likely to expand its stimulative efforts in December, and declining ZEW indices will only add to that likelihood.

Later in the day, from the US, we get the job openings for September and the on crude oil inventories for last week.

As for the speakers, we have only one on today’s agenda and this is Fed Board Governor Randal .