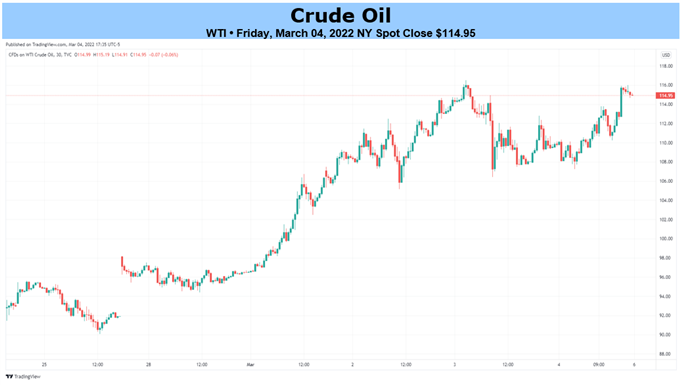 Another bout of risk aversion stemmed from reports that Russian troops had seized Europe’s largest nuclear power plant, which in turn saw oil prices retain a bid, meanwhile European equities extended their recent run of losses, posting the worst weekly performance since Q1 2020. Adding to this, the price action, does appear to be somewhat of a deleveraging in order to reduce weekend gap risk. Therefore, IF there is no significant escalation across the weekend, markets may see a slight recovery at the beginning of the week.

As geopolitical conflict shows very little signs of receding in the near-term, oil prices will remain elevated. That said, headline risk will persist and given the average daily range over the past week of $8/bbl, remaining agile will be key for traders, given plenty of risks on both sides. As such, in this current backdrop, sources such as Twitter can be vital in current times with the possibility to provide a time advantage for traders. This had been evidenced during yesterday’s session in light of reports that an Iranian nuclear deal could be brokered within 72 hours. In reaction, Brent crude futures fell 1.5% initially, with a total drop of 6% in the following 30 minutes. 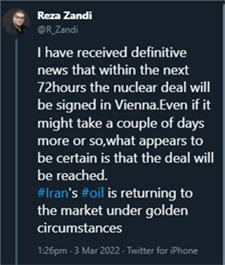 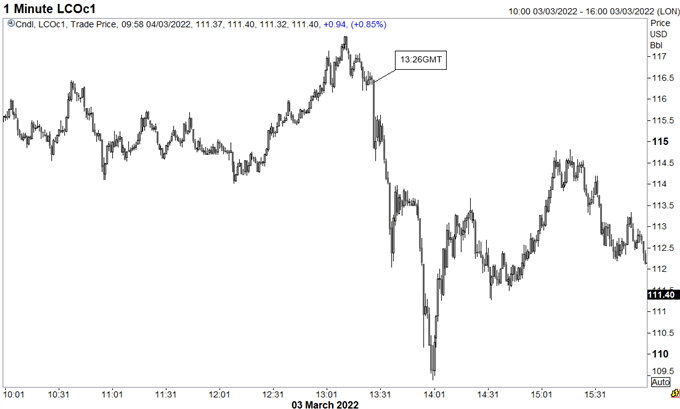 An area that has been covered extensively by DailyFX is “trading global macro news”, which ties in quite nicely as to how you can approach social media for analysing financial markets. Therefore, it is important that at first, you have a firm understanding of the fundamental drivers for the assets that you trade and are also constantly up-to-date with the current themes/narratives. With this knowledge of key market drivers, alongside current market positioning/sentiment, as a trader, this will better prepare you as to how markets will react to new information. Keep in mind that the current price of an asset reflects all available information (or so it should, according to the Efficient Market Hypothesis). Subsequently, whenever new information is released, whether that be economic data or central bank rate decisions, the price of an asset will typically move to find a new price, which reflects that information.

That said however, there is an argument that a lot of macro newsflow is simply noise and does not have a significant impact on the assets you trade, now while I do sympathise with that view to an extent. In regard to that point, when incoming newsflow is flashing on your screen, you can break this down by asking yourself two questions:

If your answer to both questions is ‘no’, then you can say with good authority that the new information is not notably market moving. While I appreciate that this is a skill that will not be mastered immediately, and quite frankly may never be completely mastered. As is usually the case with anything you do in life, experience over time is what counts, which will go a long way in helping your ability to digest key macro newsflow efficiently.

As I mentioned above, DailyFX has covered this topic in great detail, so for a complete comprehensive guide on trading the news, click on the link below.

Over the years and more recently given notable political events, namely Brexit and US-China Trade Wars, there have been numerous occasions where Twitter has been quicker to report breaking macro and company news than traditional newswires (Bloomberg and Refintiv). When this occurs, I judge this as providing traders with an edge over the market. What I mean by the market is algo’s trading off Bloomberg and Refinitiv headlines. But to save column inches I will go through a few noteworthy examples where Twitter has provided an edge.

Oil prices had collapsed as traders responded to the onset of the coronavirus crisis with the first wave of global lockdowns prompting oil demand to plunge by 1/3. Matters had been made worse for the oil market with oil plummeting to an 18-year low after Russia and Saudi Arabia had engaged in a price war.

On April 2nd, 2020 at 15:30GMT, CNBC published the tweet below. In the following 42 seconds, Bloomberg had published the original tweet, while a flashing red BBG headline occurred at 15:34.49. Refinitiv on the other hand had run the full tweet at 15:32.39. In an 8-minute period from Tweet to peak, Brent crude oil rose over 37%. 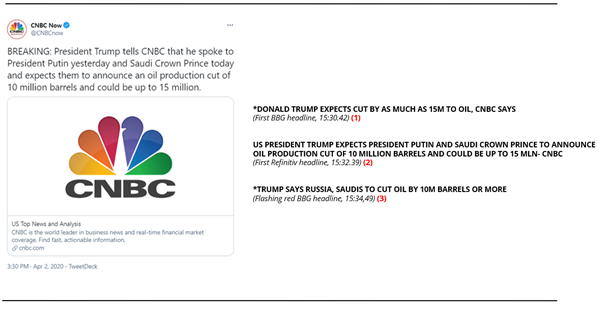 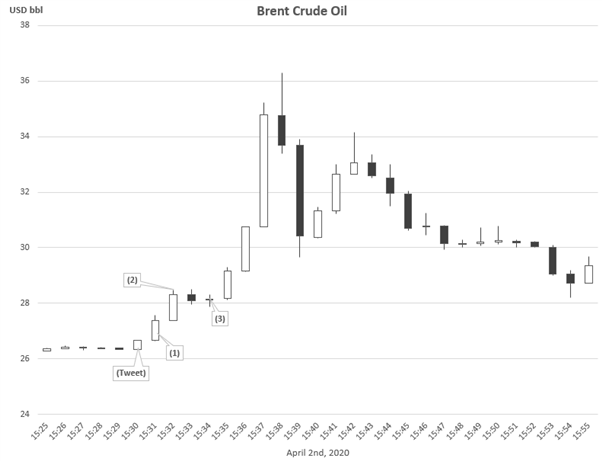 How to Create a Trading Plan