For U.S. assets, including the dollar, data shouldn’t be a big market-mover this coming week. Aside from Monday’s service sector ISM report, which ticked higher, the only scheduled U.S. release worth watching will be Wednesday’s . The Federal Reserve made its position very clear last month. With inflation running below target and unemployment at historically high levels, there are no plans to raise interest rates for the next three years. In fact, two out of nine policy-makers wanted the Fed to use stronger language to describe their commitment to low interest rates. The FOMC minutes are widely expected to reinforce the central bank’s dovish bias, which may be more negative than positive for the . Instead, the primary driver of the dollar’s flows will be headlines on President Donald Trump’s COVID-19 progression, coronavirus stimulus talks and comments from Federal Reserve President Jerome Powell. Trump left Walter Reed hospital on Monday, which means to the relief of the markets, he escaped the worst. As for another stimulus package, with Trump lagging in the polls, he’ll be pushing harder for a deal before the election. A more conciliatory approach from the White House could pave the way for a deal. If there is any hint that an agreement is close, currencies and equities will soar because, based on how stocks are trading, investors are positioning for a deal.
The broke the upper bound of last week’s trading range on the back of upwardly revised Eurozone PMIs. Service sector activity was stronger than initially estimated, which drove the September Eurozone composite PMI up to 50.4. With that in mind, this is still weaker than the previous month and precedes fresh lockdowns across the region. So while the euro is strong right now, it will be difficult for the currency to sustain its gains with clear signs of slowdown in the recovery. Industrial production, factory orders and trade data are scheduled for release from Germany, but comments from ECB President Christine Lagarde could be more important. also benefitted from upward revisions to PMIs, but its gains were a fraction of euro’s as traders grow weary of Brexit talks and fear that a call by Germany to make a big final push on a trade deal will yield little.
The Reserve Bank of Australia has a monetary policy announcement this evening. The central bank is widely expected to leave interest rates unchanged. It is not as open to the idea of negative rates as its peers, but data has deteriorated since the last policy meeting. Retail sales are down, with slowdowns seen in manufacturing, service and construction activity. A large part of this has to do with the lockdowns in Victoria that lasted more than two months. They have since been lifted, but we won’t see the impact on the economy until next month’s report. The government’s budget will be released the day after, so the next 24 hours will be particularly important for the . The last time the RBA met, it maintained its view that the recovery will be uneven and bumpy but is under way in most of Australia. Still the central bank feels that highly accommodative monetary policy is necessary, and we think their outlook will remain mostly unchanged this month.
The and Canadian dollars also rallied on Monday. No data was released from New Zealand but rose sharply, helping the loonie. This is a big week for with the , and labor market numbers scheduled for release. 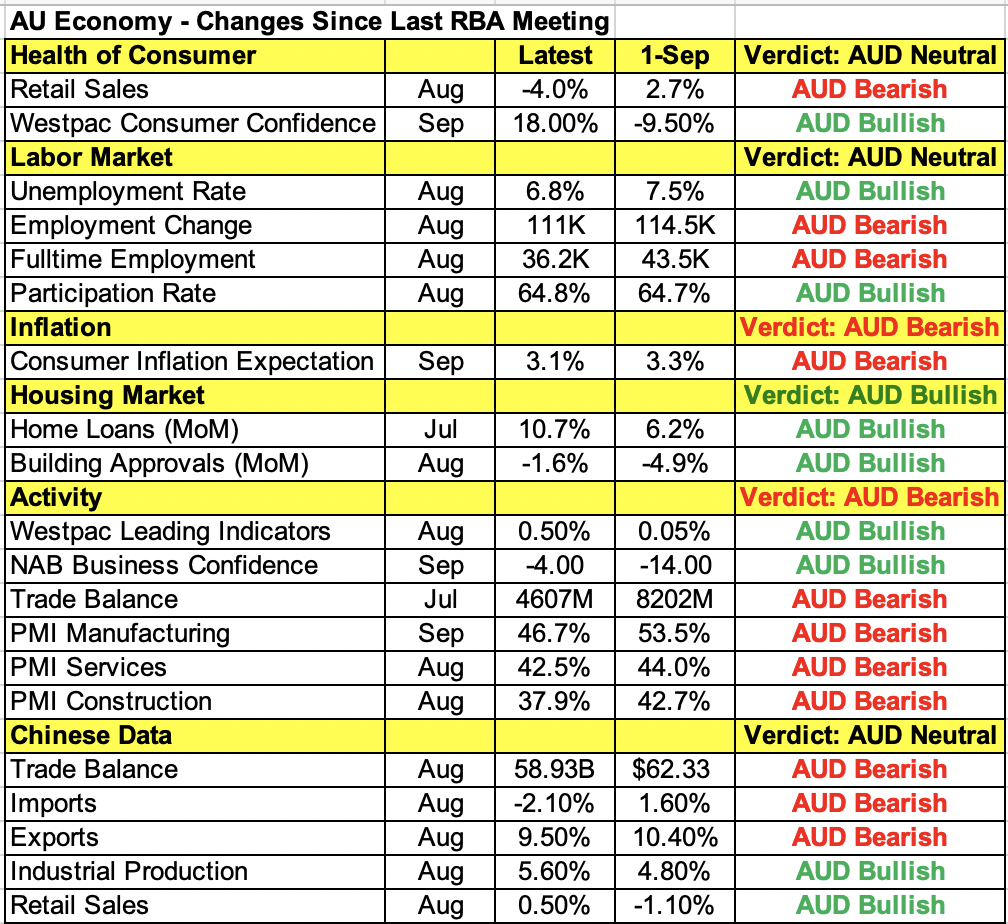