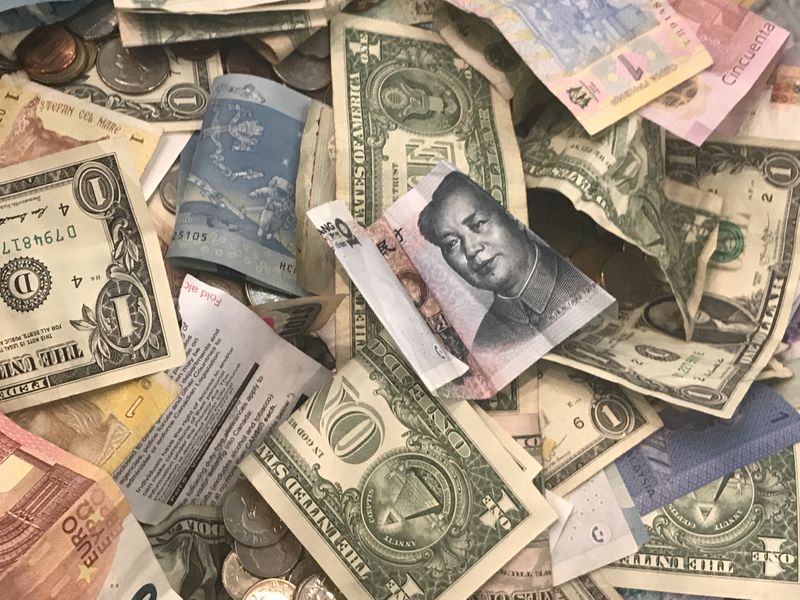 © Reuters. FILE PHOTO: U.S. dollars and other world currencies lie in a charity receptacle at Pearson international airport in Toronto

LONDON (Reuters) – Gauges for implied currency swings in the foreign exchange markets jumped to their highest levels in nearly seven months on Wednesday as traders anticipated more volatility before the outcome of the U.S. elections next week.

The contracts have nearly doubled from a day ago, in contrast to relative calm in the bond markets, indicating traders are increasingly preparing for more volatility in currency markets than in bonds, where unprecedented central bank stimulus has crushed market volatility.

The sharp end of the currency market volatility was focused on the Chinese currency. One-week implied volatility for

“We’ve got so much uncertainty ahead, from the U.S. presidential election, the second wave (of coronavirus) to Taiwan affairs,” said a trader at a Chinese bank. Markets have largely priced in a Biden presidency, the trader said, but the outcome of the election remains uncertain.

Though Democrat Joe Biden leads U.S. President Donald Trump in national opinion polls, the race is tighter in several battleground states where the election might be decided.

In equity markets, the widely watched VIX index () held below a June 2020 high. A gauge of bond market volatility () held near one-week lows.

For a graphic on Fx market volatlity: