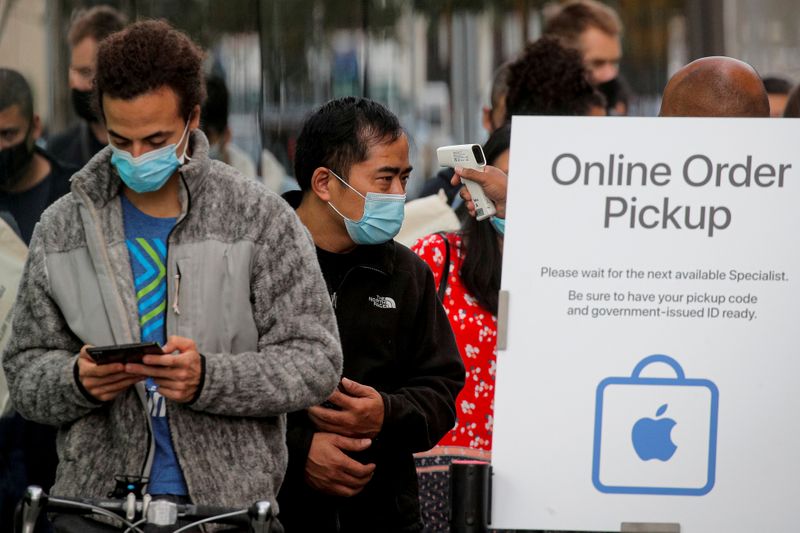 (Reuters) – With the presidential election drawing near, a litany of data released this week shows the U.S. economy continues to climb out of the recession caused by the coronavirus pandemic, but progress is slowing.

Now, with infections on the rise, economists say many voters may be weighed by a gloomy outlook when deciding whether to back the incumbent president, Republican Donald Trump, or his challenger, Democrat Joe Biden.

“I would think the overall mood of the voter going in is not joyous right now,” said Kathy Bostjancic, chief U.S. financial economist for Oxford Economics.

The economic data released this week largely beat expectations and showed incomes are rising, consumers are spending more and output is increasing. It also revealed an economy still far from where it was before the pandemic, with some consumers likely needing more help to stay aloft.

That divide was present in the pitches Trump and Biden made to voters this week, with Trump vowing to deliver more growth in a second term and Biden emphasizing the economy was still in a deep “hole.”

Friday’s report showed consumers’ incomes are recovering slowly. It also showed their spending is more concentrated on goods, such as cars, clothing and shoes, while spending on services, including travel, remained low.

The pattern shows many consumers remain cautious about how they spend because of budget constraints, fear of getting sick and activity restrictions, said Bostjancic. Some who lost jobs are spending down savings and dim prospects for more fiscal aid in the near future could be impacting consumers’ attitudes, she said.

“We’ve been through the easy portion of the reopening,” he said. “Now we’re in the slow grind upward.”

Cooling temperatures heading into the winter could provide another hurdle for restaurants and other businesses that have adapted by moving outdoors, Diane Swonk, chief economist for Grant Thornton, wrote in a note on Friday. That slow comeback for services could mean prolonged unemployment for the millions laid off because of the crisis.

Getting the virus under control and helping people get back to work will be among the largest challenges faced by the winner, analysts say..

While voters will weigh a range of issues in their decisions, some who are unemployed may back who they hope will deliver more stimulus, said Pride. Those doing well financially may not see such a need and could vote in the opposite direction, he said.

If elected, Biden has pledged to lift the federal minimum wage, roll out more stimulus and invest trillions of dollars in infrastructure and green energy programs. But he will not get far without support in Congress.

Trump has signaled he is in favor of more federal stimulus, but has offered fewer specifics on jobs.