DeFi protocols are starting to pop as total value locked rises to new all-time highs. Now Aave, Uniswap, and yEarn Finance are back in bullish territory after losing ground to .

The DeFi market is making a roaring comeback after two months of losses in the wake of Bitcoin’s run-up. Aave, Uniswap, and yEarn Finance are leading the way in gains.

experienced a significant spike in demand on Nov. 5 that saw its price skyrocket over 120%. The DeFi token went from trading at a low of $26.4 to hit a high of $59 within four days. Despite the significant gains incurred in such a short period, prices could be preparing to retrace.

Technical indicators reaffirm that Aave is preparing to drop. The TD Sequential indicator presented a sell signal in the form of a red nine candlestick on AAVE’s 12-hour chart. This bearish formation estimates that an increase in downward pressure may trigger a one to four daily candlesticks correction before the uptrend resumes. 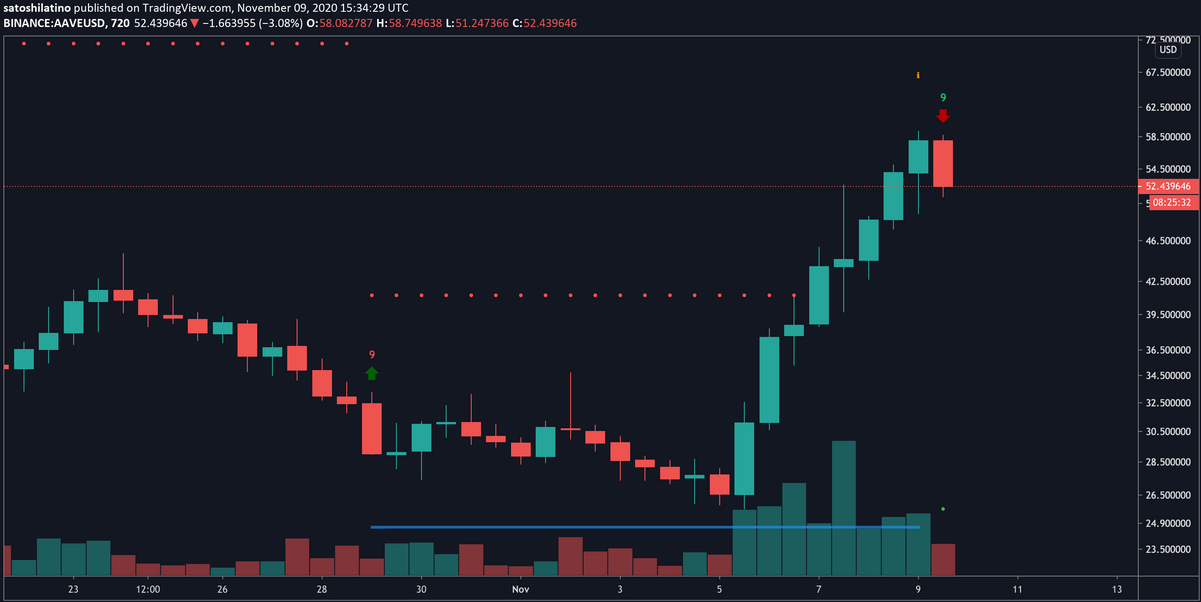 IntoTheBlock’s “In/Out of the Money Around Price” (IOMAP) model reveals there are no significant demand barriers that will prevent the lending protocol token from dropping further. Based on this on-chain metric, the only considerable interest area sits between $45.6 and $42.6, where roughly 770 addresses had previously purchased 3.15 million AAVE.

This hurdle may have the ability to absorb some of the selling pressure seen recently. Holders within this price range would likely start buying to prevent prices from deteriorating further. However, if Aave breaks through this layer of support prices would likely plummet to $31.6.

On the flip side, the IOMAP cohorts show that this cryptocurrency is trading below stable resistance. Nearly 300 addresses bought roughly 4.7 million AAVE between $55.5 and $56.2.

Only a candlestick close above this critical supply level could invalidate the bearish outlook and lead to further gains.

appears to have reached a market bottom on Nov. 5, with the charts indicating a build-up of buying pressure since then. Over the past four days, this cryptocurrency has risen more than 68%—but the bullish impulse seems to have been contained by the 200-four-hour moving average on the 4-hour chart.

While prices managed to test this critical area of resistance over the past few days, so far it has kept rising prices at bay. 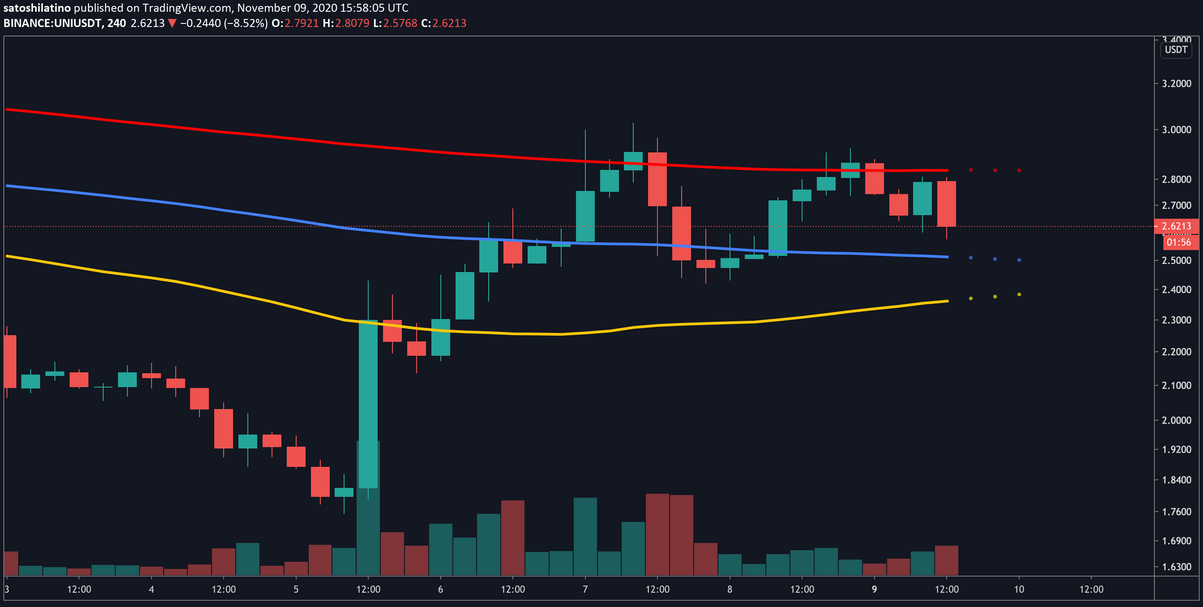 IntoTheBlock’s IOMAP shows that approximately 1,800 addresses bought 6.7 million UNI between $2.87 and $2.95. Therefore, only a spike in demand that allows this altcoin to turn the 200-four-hour moving average into support can confirm that prices will rise towards $3.3 or higher.

It is worth mentioning that Uniswap sits on top of a massive supply barrier that may have the strength to prevent the bulls from losing grip over the price action. The IOMAP cohorts indicate that more than 4,000 addresses had previously purchased over 40 million UNI around $2.4.

This support area could absorb some of the selling pressure in the event of a correction, bracing the DeFi token from falling further.

seems to have entered a consolidation period after surging nearly 143% in the last few days.

By measuring the distance between the initial high and low of the pattern and adding it to the breakout point, the symmetrical triangle suggests a 23.5% target. An increase in the buying pressure behind this cryptocurrency could take it to trade at around $19,000. 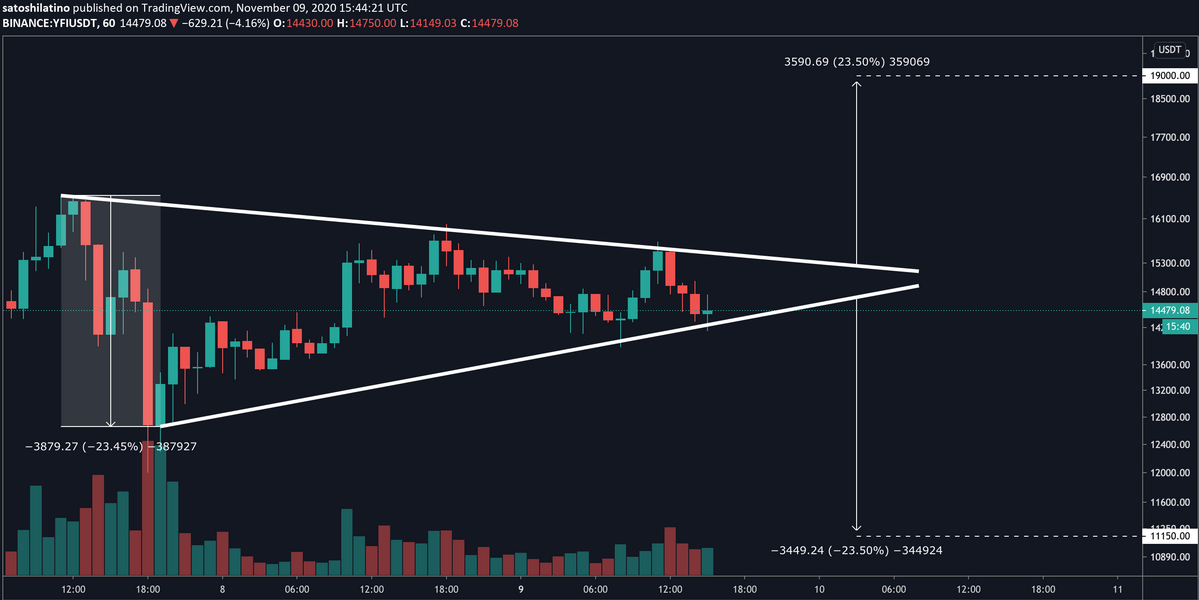 Although symmetrical triangles can develop as continuation patterns, they can also form as reversal patterns to an uptrend. For this to happen, the DeFi token would have to break below the support trendline at $14,000. IntoTheBlock’s IOMAP shows that over 1,000 addresses are holding nearly 10,500 YFI around this price level.

While this massive interest area may keep falling prices at bay, breaking below it would likely cause prices to drop more than 20% towards the $11,000 support level.

Symmetrical triangles are directionally ambiguous, meaning that it is essential for traders to wait for confirmation before entering a position. A candlestick close above or below the converging trend lines will provide a better idea of where yEarn Finance is headed next.

The DeFi Market Expected to Rally

While the global financial markets assess the impact of a potential COVID-19 vaccine, the total value locked in DeFi protocols continues to make new all-time highs. Such high levels of interest in this segment of crypto suggest that it has more room—despite the massive losses incurred over the past two months.

Aave, Uniswap, and yEarn Finance appear to have reached a market bottom on Nov. 5—now investors are growing overwhelmingly greedy. The overall sentiment is that these three cryptocurrencies are poised to recover their lost ground and aim for even higher highs.

Although this may seem to be the case, as shown in the previous analysis, data shows that the segment may see several corrections as Bitcoin surges.

For this reason, investors must pay close attention to the different support points mentioned before. As long as AAVE, UNI, and YFI can hold above their respective demand barriers, the bullish outlook will prevail. Failing to do so may trigger a sell-off that would shake out weak hands before the uptrend resumes.