Desperate for fuel, Venezuelans steal PDVSA crude and make their own gasoline By Reuters 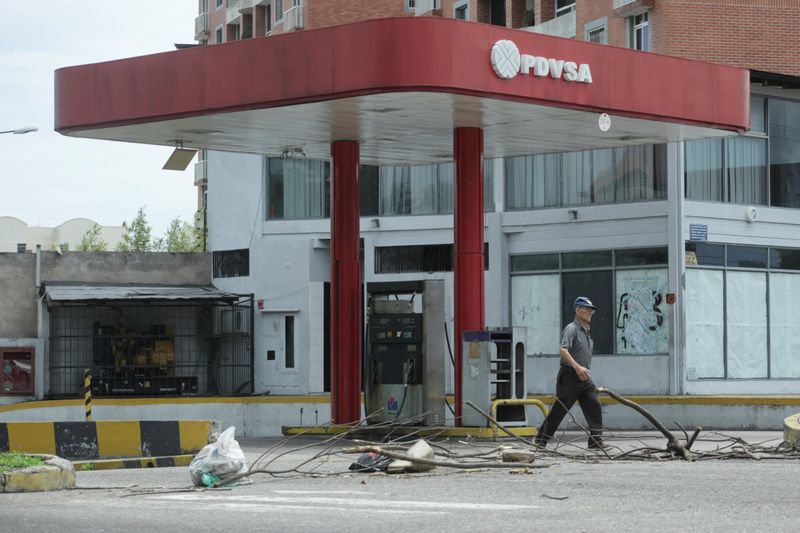 © Reuters. FILE PHOTO: A man walks past a closed gas station of the state oil company PDVSA in San Cristobal

By Mariela Nava and Luc Cohen

MARACAIBO, Venezuela (Reuters) – Venezuelans, desperate for fuel after months of shortages, have begun stealing crude from idled fields owned by state oil company Petroleos de Venezuela [PDVSA.UL] and distilling homemade gasoline, according to two PDVSA workers and a half dozen people familiar with the practice.

The amount of crude stolen is a tiny fraction of Venezuela’s output. But the activity is testament to the crises at PDVSA, which can no longer supply the country’s population with fuel.

Venezuela’s once-formidable 1.3 million barrels per day (bpd) refining network has collapsed, oil and refining installations have little security or maintenance, and the firm is unable to retain qualified workers as salary values erode.

The company has hit a new low this year. Under pressure from U.S. sanctions – part of Washington’s effort to oust President Nicolas Maduro – Venezuela’s crude output fell to just 397,000 bpd in September, down from 1.2 million bpd before the sanctions were imposed in January 2019 and the lowest level since the 1930s.

The sanctions have targeted gasoline imports, forcing Venezuelans to wait in snaking lines outside gas stations. Many citizens regard that as a bitter indignity in an OPEC producer, which has, by some measures, the world’s largest crude reserves.

The supply chain for the so-called “artisanal gasoline” begins at oil fields such as La Concepcion in the western state of Zulia, which produced more than 12,000 bpd of high-value light crude 15 years ago.

The field has been idled for two years as PDVSA, once one of the top 10 oil companies in the world by crude output and a major exporter, has collapsed into a shell of its former self.

Small tubes now jut out of holes drilled into pipelines that were built to carry La Concepcion’s crude to storage tanks and export facilities. The tubes bring the oil to rudimentary refineries in backyards of a nearby town, according to Danny, a PDVSA worker who asked to be identified by his first name.

“It is obvious that people are stealing the oil, which is the only source of wealth we have,” Danny said.

PDVSA did not respond to a request for comment. A former company executive estimated that less than 1,000 bpd of crude is stolen, less than 1% of total output.

PDVSA has spent months trying to fix refineries that have fallen into disrepair due to a lack of funding for maintenance and to buy spare parts. The efforts and have been plagued by oil spills, gas leaks, and fires that have injured workers.

The company managed to restart gasoline output at its 310,000 bpd Cardon and 146,000 bpd El Palito refineries in June and July, respectively, but both have suffered multiple unplanned outages in the months since, resulting in intermittent fuel output.

“We cannot perform such demanding activities if we’re hungry,” said Freddy Camacho, an engineer who has worked on the effort to restart the Cardon refinery, and repairs refrigerators for extra cash.

Until this year, Venezuelans had no need to steal crude to make their own fuel.

Similar activities have long been common in Nigeria, where dozens of illegal refineries process crude stolen from pipelines. In other Latin American oil producers, such as Mexico and Brazil, it is common for criminal gangs to steal fuel from pipelines coming out of refineries, rather than take the raw material.

In Venezuela, abundant fuel had for decades been essentially free thanks to subsidies. But that situation was a distant memory by early August, when Jaime – a dairy farmer in Zulia – needed to send cheese to market in state capital Maracaibo, but could not find any gas to drive there.

A neighbor suggested he call a man named “El Flaco” – Spanish for “The Skinny Guy” – in the nearby town of La Concepcion. Jaime did not ask ‘El Flaco’ where the gasoline came from, but he was aware of the growing crude theft and makeshift refining taking place in Zulia.

“They get it out of oil wells here in La Concepcion. They boil it and pass it through tubes, and then sell you the liquid that drips out,” Jaime told Reuters on the condition his last name not be published.

Danny, as well as another PDVSA worker and several people whose relatives are engaged in the activity, described the process to Reuters.

At the field, thieves puncture pipelines, and, holding a blowtorch below the pipe, heat up the crude so it flows into smaller tubes they insert into the punctured hole.

Videos of the clandestine refineries have circulated on social media https://twitter.com/Duglenis/status/1308787782035410952. In one, a small fire is seen burning under two black canisters held in a rusted barrel, with a series of small tubes transporting clear liquid into buckets. A larger tube, buried underground, transports that liquid into white gas cans.

Jorge Leon, an engineer specializing in industrial security for the oil industry, said the fluid the makeshift refiners were extracting was chemically volatile and lacked the additives normally added to gasoline to ensure safety for car engines.

“Not only can it damage the engine, but it could cause explosions,” Leon said.

The artisanal gasoline Jaime bought from El Flaco did not turn out to be a viable solution.

“The truck drove fine for a couple days, but three days after, the engine started to sputter,” Jaime said. “Now it won’t turn on.”