Dollar in narrow range ahead of U.S. election, pound weakens By Reuters 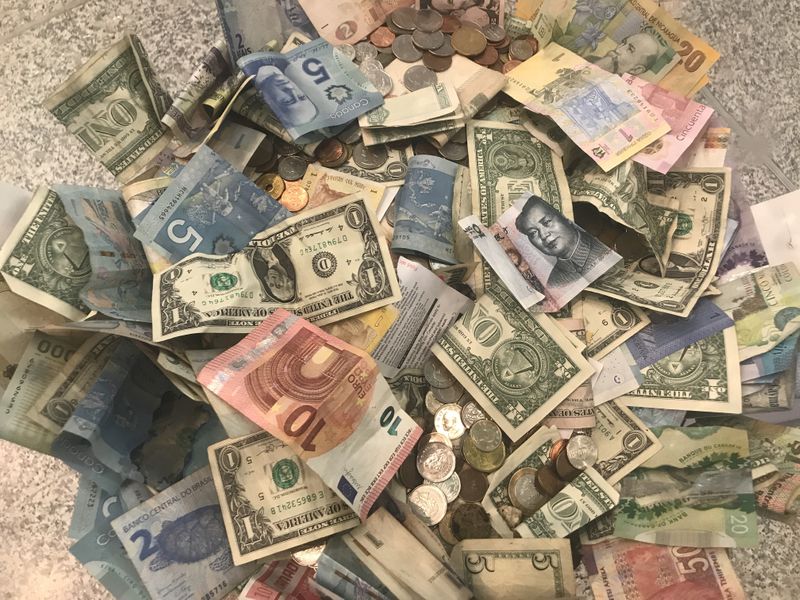 © Reuters. FILE PHOTO: U.S. dollars and other world currencies lie in a charity receptacle at Pearson international airport in Toronto

TOKYO (Reuters) – The U.S. dollar steadied on Monday as investors prepared for U.S. presidential elections on Tuesday, while a surge in global coronavirus cases continued to weigh on sentiment.

The greenback held onto gains after posting its largest weekly percentage rise since late September in the previous trading session.

The pound inched lower on cornavirus worries, after British Prime Minister Boris Johnson announced over the weekend a one-month lockdown across England.

Investors are sticking to the U.S. currency, which is often considered to be safe, as Tuesday’s presidential election keeps financial markets on edge.

Democratic challenger Joe Biden leads in national opinion polls though the race is seen as close in enough battleground states that President Donald Trump could achieve the 270 votes needed to win in the state-by-state Electoral College that determines the overall victor.

“Currency volatility can extend well beyond Election Day because there is a high risk the losing candidate will dispute the election results. The 2000 election took around one month to resolve the disputes,” analysts at Commonwealth Bank of Australia (OTC:) said in a client note.

England’s lockdown aimed to last until Dec. 2 could be extended as Britain struggles to contain a second wave of COVID-19, a senior cabinet member said on Sunday. The United Kingdom is grappling with more than 20,000 new coronavirus cases a day.

The euro steadied in Asian trade but was close to hitting long-term lows against the greenback and Japanese yen.

“The euro has been selling since infection cases and lockdowns stood out in Europe,” said Daisuke Uno, chief strategist at Sumitomo Mitsui (NYSE:) Bank.

“But infection cases in other countries, like the U.S., have been on a rise as well. As time goes on, I think increasing coronavirus cases and lockdowns will be common topics in any country, to the extent that they are no longer themes for the currency market,” he said.

The greenback was little changed against the yen at 104.72 yen

“Dollar/yen will likely remain quiet for today and tomorrow, due to the election,” Daiwa Securities chief FX strategist Mitsuo Imaizumi said, but added any dispute over vote count could lead to volatility.

Besides the U.S. presidential election, this week is filled with economic data, including PMI data from the United States, euro zone and elsewhere, as well as U.S. non-farm payrolls and Chinese trade.

Three central banks are also due to announce policy decisions this week. The Reserve Bank of Australia meets on Tuesday, while the Bank of England and U.S. Federal Reserve deliver their decisions on Thursday.

Facebook
Twitter
Pinterest
WhatsApp
Previous articleOil Slumps as Europe Locks Down By Investing.com
Next articleDeclaring a crackdown? What to make of the DoJ crypto framework release