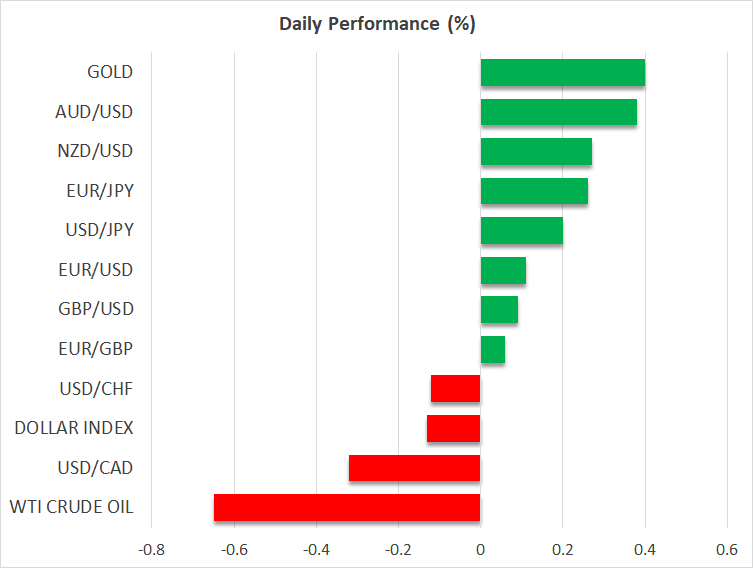 Worries that the US consumer is rolling over were dealt a major blow yesterday after the nation’s retail sales for August overpowered some gloomy forecasts. The retail sales control group that is used in GDP calculations rose by 2.5%, more than erasing last month’s decline.

The news catapulted the dollar higher along with Treasury yields as traders positioned for a more constructive tone by the Fed, which might use next week’s meeting to prepare the ground for dialing back its asset purchases come November.

Beyond tapering signals, markets will pay close attention to the famous ‘dot plot’ of interest rate projections. If three more FOMC officials pencil in a rate increase for 2022, that would push the ‘median dot’ for that year higher, signaling a hike faster than markets currently expect.

The wild card is whether policymakers will incorporate into their new economic forecasts some probability of greater fiscal spending to reflect what Congress might deliver over the next few months. If so, that would allow for rosier economic projections and make it easier for another three officials to upgrade their rate path estimates for next year.

As always, what is good for the dollar and Treasury yields is negative for gold, which is priced in dollars and pays no interest to hold. The yellow metal sank yesterday as some investors abandoned ship, fearful of deeper losses in case the Fed strikes a hawkish chord next week.

Bullion amassed losses of almost 2.7% before triggering some fresh buy orders around the $1745 region and it subsequently rebounded a little. The fundamental outlook remains quite grim in an environment where the Fed begins to inject less liquidity into the financial system and ultimately raises rates.

Indeed, it’s difficult to find any strong bullish arguments for gold. Even the Fed delaying its hiking cycle by a few months wouldn’t change much. The best gold bugs can hope for is some cataclysmic event that reignites bullion’s status as a defensive hedge.

There is a lot of indecision in stock markets lately. The major indices on Wall Street closed a volatile session little changed on Thursday as traders weighed a stronger US consumer against worries around less central bank liquidity and risks in the Chinese property market.

So far, there has been almost no spillover from the Evergrande fiasco. The fallout has been contained in local real estate stocks and junk bonds. There haven’t been any real signs of stress in the nation’s massive banking system, with interbank lending rates being relatively stable – a sign that financial institutions aren’t panicking about a liquidity crisis.

Still, this is a huge risk hanging over global markets. Not because it could set off a domino effect of cross defaults – Beijing would stop that in its tracks. Rather, because a massive hangover in a real estate sector that accounts for roughly 28% of GDP could compound an already-slowing economic data pulse, suppressing growth.

As for today, a ‘quad witching’ event might spice things up. This is when options and futures on stocks and indices expire, often generating some wild moves as funds and money managers refresh their exposure.

Finally, there is an avalanche of events next week to keep traders entertained, including central bank meetings in America, Japan, Switzerland, and the United Kingdom, along with elections in Canada. Social stock exchanges in India: Can they help lift the underserved? At CWC meet, Sonia Gandhi sends stern message to G-23 dissenters: ‘I am full-time, hands-on Congress president….no need to speak to me through media’