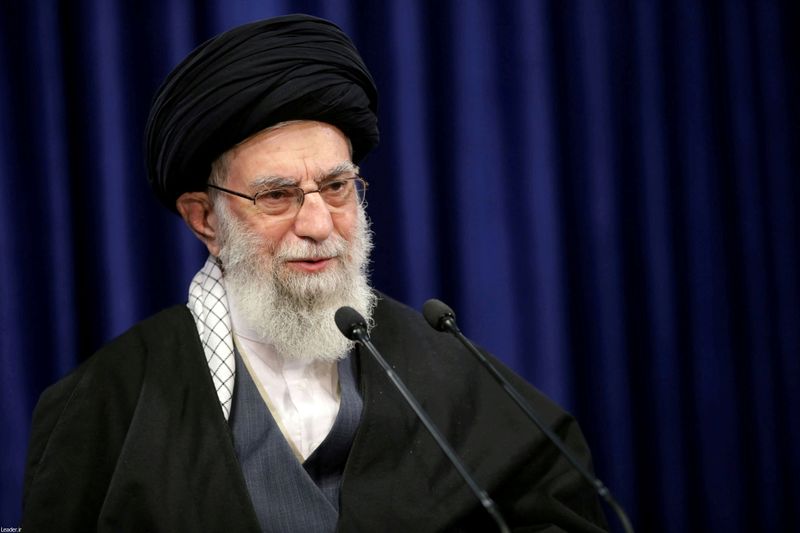 DUBAI (Reuters) -Iran’s Supreme Leader Ayatollah Ali Khamenei said on Friday that people could not be blamed for protesting over water shortages, and called on officials to deal with the crisis.

People have taken to the street for more than a week to vent their anger about the shortages, which have come during Iran’s worst drought in half a century and as the economy creaks under U.S. sanctions and COVID-19.

Overnight the unrest spread from the oil-rich southwestern province of Khuzestan to the town of Aligudarz where one youth was shot dead and seven were injured, a police official said, blaming “counter-revolutionaries” for the violence.

“The people showed their displeasure, but we cannot really blame the people because the issue of water is not a small one especially in Khuzestan’s hot climate,” Khamenei was quoted by state TV as saying, in reference to the protests.

“Now, thank God, all the various agencies, governmental and non-governmental, are working (to resolve the water crisis) and should continue with all seriousness,” Khamenei added.

The semi-official news agency Fars quoted a police official as saying several people were detained after the violence in Aligudarz. He said four police officers were shot and injured.

At least one policeman and three young men had been shot dead in earlier protests, according to Iranian officials who blamed “rioters” for the deaths.

Amnesty International said, though, that at least eight people had been killed during the unrest.

Reuters has not reviewed the footage.

U.N. human rights chief Michelle Bachelet said she was “extremely concerned about the deaths and injuries that have occurred over the past week, as well as the widespread arrests and detention”.

“The impact of the devastating water crisis on life, health and prosperity of the people of Khuzestan should be the focus of the government’s attention, not the protests carried out by people driven to desperation by years of neglect,” she said.

The country’s economy has been blighted by sanctions imposed by former U.S. President Donald Trump, and the COVID-19 pandemic. Workers, including thousands in the key energy sector, and pensioners have protested for months amid discontent over mismanagement, unemployment and inflation.