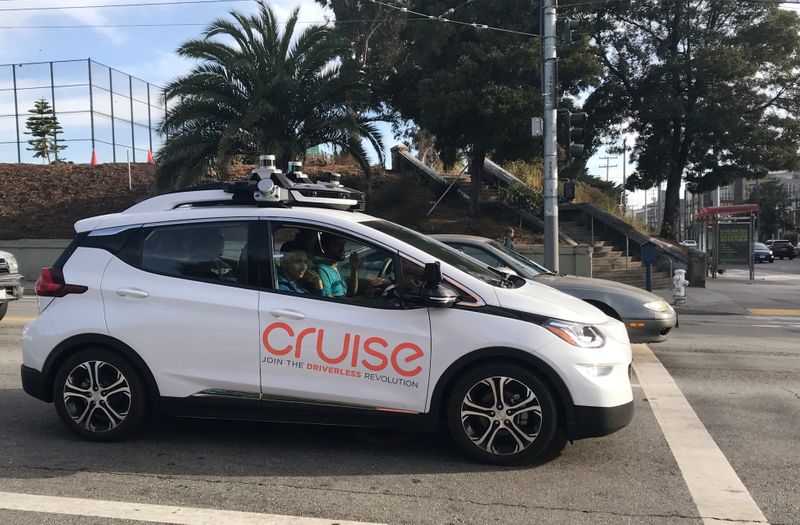 © Reuters. FILE PHOTO: A Cruise self-driving car, which is owned by General Motors Corp, is seen outside the company’s headquarters in San Francisco

OAKLAND, Calif. (Reuters) – The race for driverless autonomous vehicles is heating up and on Thursday Cruise became the first to receive a permit to test cars without anyone in them on the streets of San Francisco from California’s Department of Motor Vehicles.

Cruise, which is majority owned by General Motors Co (N:) and counts Honda Motor Co Ltd (T:) and SoftBank Group (T:) as investors, has been testing 180 self-driving cars in San Francisco with a safety driver behind the wheel, and the permit allows five of those cars to roam empty. But don’t expect robo-taxis just yet.

“So that’s a step or two beyond what we’ll be doing initially with this permit,” said Dan Ammann, Cruise’s chief executive. “It’s not too far down the road,” he said, but declined to share a timeline.

In a blog post, he added, “We’re not the first company to receive this permit, but we’re going to be the first to put it to use on the streets of a major U.S. city.” (https://medium.com/@DanAmmann/f447f27cb353)

It will be an important step for Cruise to charge customers.

For any of the companies to start making money in California, a separate permit is required, state officials said.

As part of SoftBank’s investment, SoftBank is obligated to purchase additional Cruise shares for $1.35 billion when Cruise is ready for commercial deployment.

“That’s a nice incentive to get to commercial deployment,” said Ammann, adding Cruise was in “very strong” financial shape after raising more than $7 billion. Cruise booked a $1 billion loss in 2019, according to a GM filing.

Cruise is the fifth company to receive the driverless permit in California. Alphabet’s Waymo was the first in late 2018 to receive it for about three dozen test vehicles with speeds of up to 65 miles per hour. This year SoftBank-backed Nuro, whose vehicle has no steering wheel or pedals, was also approved and has delivered medical supplies for temporary COVID-19 hospitals.

Chinese startup AutoX and Amazon.com Inc’s (O:) Zoox also got their permits in recent months. The four previous permits are for cities in Silicon Valley that are easier to navigate.

Under its permit, Cruise cars can go anywhere on San Francisco streets at a maximum speed of 30 miles per hour, and can drive both day and night.

In Arizona, which has been more open to testing of self-driving cars without drivers, Waymo has already been charging a select group of customers since summer of 2019 for empty vans that pull up and shuttle them around. That program – temporarily paused for the pandemic – was restarted in October and is expected to soon open to the wider public.

To prepare for its robotaxi future, Cruise is working on improving its ride hailing app that employees use for free to get around the city, Ammann said.

That future would likely eventually include the Cruise Origin an electric vehicle with no steering wheel or pedals unveiled in January, but it would require approval from The National Highway Traffic Safety Administration (NHTSA).

Facebook
Twitter
Pinterest
WhatsApp
Previous articleBank of England Stands Pat on Interest Rate Outlook, Focus on Brexit Reaction By Investing.com
Next articleGold Sits Above $1,900 Amid Brawl Over Stimulus By Investing.com