E-mini: Outside Up Bar Ahead Of August NFP

After an outside down day on Monday (traded above Friday’s high and then below its low), yesterday, traded below Monday’s low and reversed up to above Monday’s high, making it an outside up bar.

As such, we’re now in a second consecutive outside bar. This is an OO (outside-outside) setup, which is a Breakout Mode pattern. Traders theoretically will buy above and sell below. Because it is coming in a strong bull trend and on a reversal up from the bottom of an 8-day tight trading range, and yesterday closed with a big bull body, a bull breakout is more likely.

Since the daily chart is in Breakout Mode, the breakout could be strong and last for a few days. Friday’s is the next catalyst. The E-mini might continue its tight range until the report is released.

And what about a bear breakout? For over a year, the bulls have bought every strong 1- to 3-day selloff. They will continue to do that until it no longer works. That would require a big move down and probably more than just 3 days down. Until then traders will continue to expect higher prices.

On the monthly chart, July closed near its high, and it was the sixth consecutive bull bar on the monthly charts. I have been saying that August should trade above the July high. Yesterday could be the set up that leads to that new high.

E-mini 5-minute chart and what to expect today 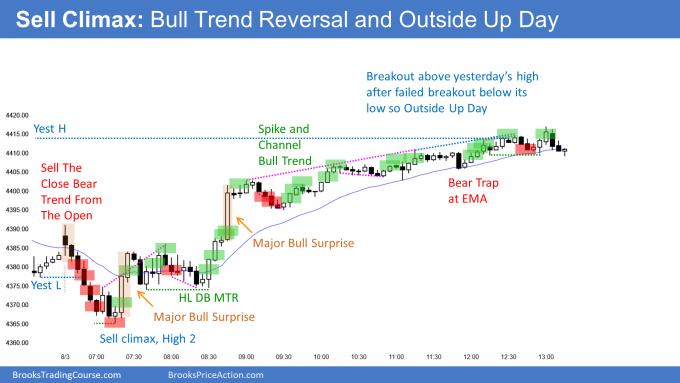 Here are several reasonable stop entry setups from yesterday. I show each buy entry with a green rectangle and each sell entry with a red rectangle. Buyers of both the Brooks Trading Course and Encyclopedia of Chart Patterns have access to a much more detailed explanation of the swing trades for each day (see Online Course/BTC Daily Setups). My goal with these charts is to present an Always In perspective. If a trader was trying to be Always In or nearly Always In a position all day, and he was not currently in the market, these entries would be logical times for him to enter. These therefore are swing entries. It is important to understand that most swing setups do not lead to swing trades. As soon as traders are disappointed, many exit. Those who exit prefer to get out with a small profit (scalp), but often have to exit with a small loss. If the risk is too big for your account, you should wait for trades with less risk or trade an alternative market like the Micro E-mini.