E-Mini Pulling Back – Will Bears Get A Third Bear Bar?

Yesterday triggered a minor sell signal for the by trading below Tuesday’s low. Since it came in a strong bull trend, the reversal down should run only a few days. Since yesterday closed on its low with an E-mini pullback reversing down from above the 4-month trading range (Sept. 2 high), today should trade below yesterday’s low.

The bears want a 3rd consecutive bear bar, which would increase the chance of at least a couple small legs sideways to down. Yesterday was a pullback in a bull trend. It is therefore a High 1 buy signal bar. But it was a big bear bar and the 2nd consecutive bear bar in a buy climax at resistance (the September high). There will probably be sellers not far above yesterday’s high.

Most bars do not close on their highs. That increases the chance of a pullback going into the end of the month, which would create a visible tail on the top of October’s bar on the monthly chart. After October formed an outside up month after September was an outside down month, the odds already favored at least slightly higher prices in November.

The bears would need several big bear bars on the daily chart before traders would conclude that the breakout above the Sept. 2 high at the top of the 4-month trading range might fail. Without that, traders will continue to expect higher prices.

E-mini 5-Minute Chart And What To Expect Today

E-mini was up 14 points in the overnight Globex session. Since yesterday was a sell climax, there is a 75% chance of at least a couple legs sideways to up, starting by the end of the second hour. Also because it ws a big bear day closing near its low and the second consecutive bear day, either today or tomorrow should test below yesterday’s low.

The next support below that is last month’s high. Remember, I have been saying for the past week that the month might sell off at the end of the month. Has it sold off enough? Maybe, but it might have to test the September high. Can the E-mini reverse back up to the high from these support levels by the time October closes tomorrow? It is unlikely to make a new high by tomorrow’s close after consecutive bear bars closing near their lows. That reduces the chance of a big bull day today.

Since yesterday collapsed down to support, there is an increased chance of some back filling. The E-mini might enter a trading range today between the open of the week at 4544 and the 60-minute EMA above, around 4560. Since those prices are only 16 points apart, if there is a trading range, its height should be bigger. That means the E-mini should go beyond at least one of them today. 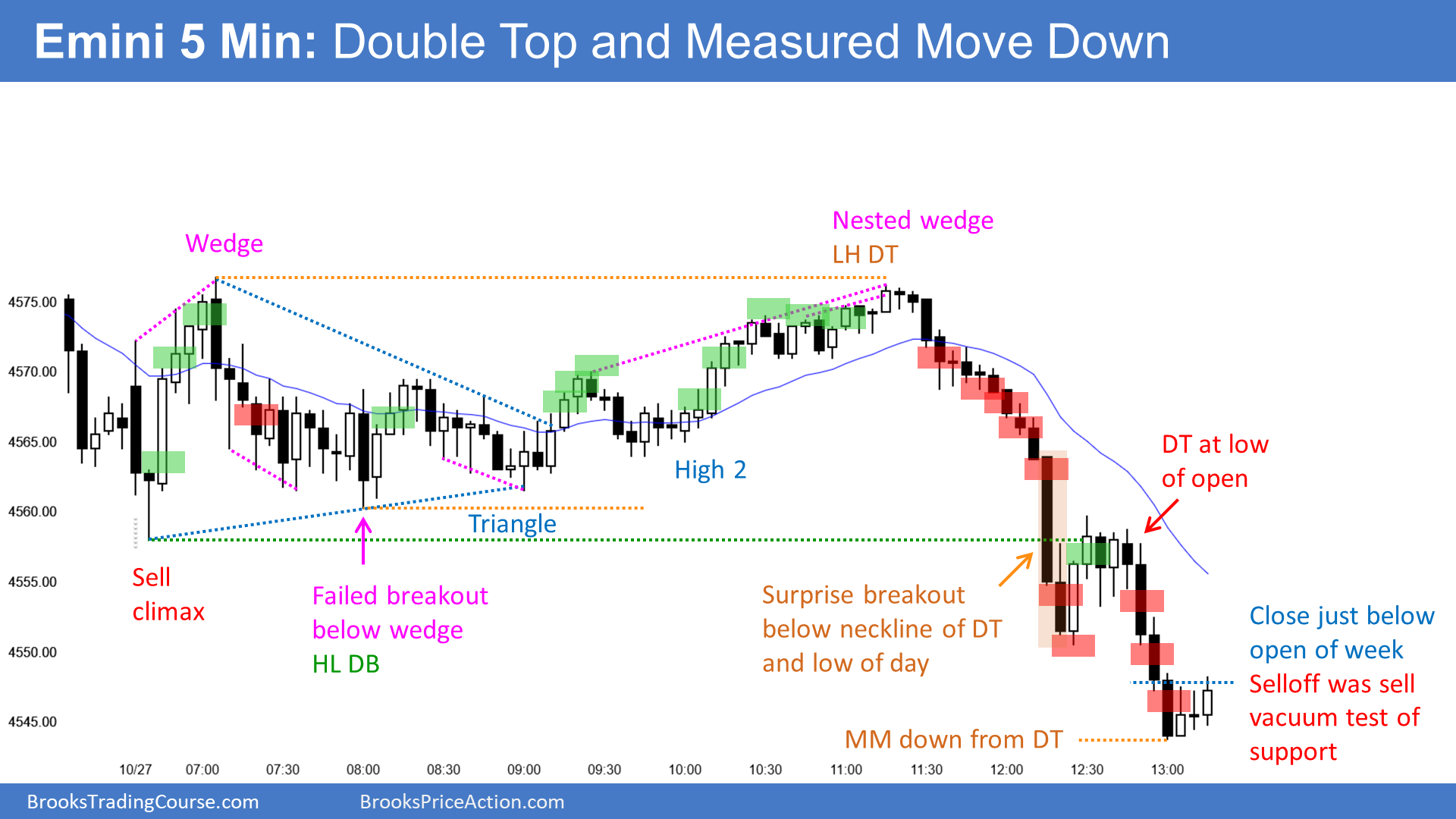