ECB Financial Stability Review And US Data Before Thanksgiving


Today we have a busy day in terms of economic data releases. Given that today is the last full trading day in the US before the country goes on to celebrate Thanksgiving, we will be getting a lot of data, which could increase volatility significantly. Also, a few hours before the US data, the ECB will be delivering its Financial Stability Review.

The ECB will deliver its , in order show what it and other eurozone central banks think about the current state of the financial system. The report is aimed to promote awareness of the European financial industry and show the issues that surround it at the moment. In the previous review, which was delivered in May, the ECB stated that:

“The spread of the coronavirus (COVID-19) triggered abrupt shifts in asset prices and led to an increase in financial system stress”.

“The coronavirus pandemic has affected virtually all aspects of economic activity, at times interacting with pre-existing financial vulnerabilities. Even if temporary, there will be a significant contraction in euro area economic activity this year”.

We do not expect the to react much to the report.

Before the start of the US session, we will receive some economic data from the US. and jobless claims for the past week will be released. There is currently no forecast for the continuing jobless claims number, but initial one is believed to have improved slightly, going from 742k to 730k.

Also, the US will release its preliminary Q3 QoQ figure, which is expected to have stayed the same as previous, at +33.1%. If so, the could stay focused on the other US datasets, which will fall under the spotlight, and that’s the and headline PCE rates for the month of October. There are no forecasts for the headline MoM and YoY PCE figures, however the core ones are believed to have ticked down by a tenth of a percent. The number is expected to slide from +0.2% to +0.1% and the one is believed to have fallen from +1.5% to +1.4%. Certainly, if the actual figures move even below the initial forecasts, this is not something that the Federal Reserve would like to see.

The Fed uses the PCE index, when making their monetary policy decisions. And given that the FOMC has set a target to bring inflation slightly above 2%, in order to have longer term inflation near the average of 2%. If the actual PCE figures come out below forecast, that might have a negative effect on USD. 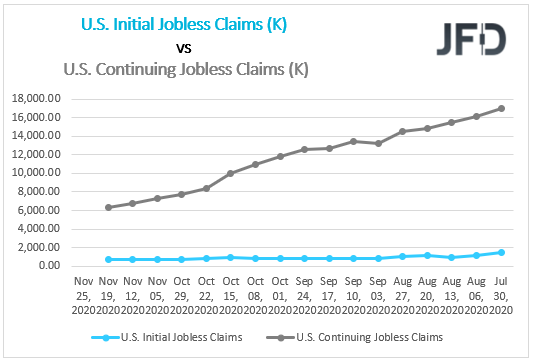 US Initial vs Continuing Claims

US will also deliver the consumer and numbers for the month of October on a MoM basis. So far, the forecasts sit on the lower side. Personal income is believed to have gone down from +0.9% to +0.1% and personal spending is expected to drop from +1.4% to +0.3%. If that’s the case. This may create a risk-off environment in the market. 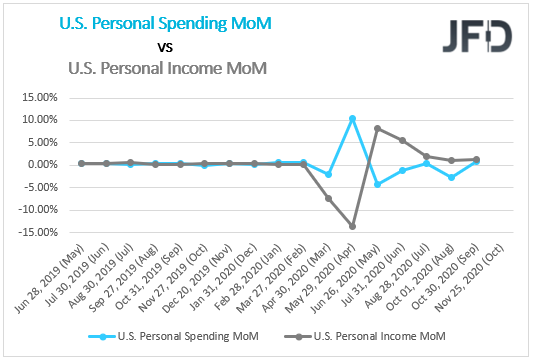 US Spending Vs Income

Later on, we will get the from the last FOMC meeting. Investors will try to seek clarity on how policymakers are willing to proceed further. During the previous meeting, the Fed decided to take a wait-and-see approach, because of the uncertainty surrounding the US elections. The Committee had state last time that they are ready to use all available tools to support the US economy.

Despite rebounding from the 1.2990 zone this morning, remains below a short-term tentative downside line taken from the high of Nov. 13. If the pair struggles to bypass the 1.3034 barrier, marked by the low of Nov. 18, that could result in another slide. For now, we will take a cautiously-bearish approach.

If USD/CAD makes its way a bit further up, but fails to climb above the aforementioned 1.3034 barrier, the bears might take advantage of the higher rate and send it lower again. If so, the next target may be the 1.2990 hurdle, which is the current low of today. If that hurdle fails to provide support for USD/CAD and eventually breaks, the next potential aim for the pair might be at 1.2928, which is the current lowest point of November.

In order to shift our attention to some higher areas, we would need to see a break of the of the aforementioned upside line and a rate-rise above the 1.3091 barrier, marked by the high of Nov. 24. Such a move may attract more buyers into the game, allowing the rate to rise to the 1.3123 zone, a break of which could clear the way to the 1.3171 level, marked by the high of Nov. 13.

During the early hours of the Asian morning, found strong resistance near the 77.10 barrier, which is currently the highest point of November. Although we are seeing a small decline, at the time of writing, the pair still remains well above a short-term tentative upside support line drawn from the low of Nov. 1. If that upside line stays intact, the bulls could continue to stay in the playing field. That said, in order get comfortable with higher areas, a break above that 77.10 barrier would be needed.

A strong push above the 77.10 hurdle would confirm a forthcoming higher high, potentially clearing the path to some larger extensions to the upside. We might then aim for the 77.50 obstacle, or the 77.73 zone, which is marked by the high of Sept. 10. Initially, the rate may stall there for a bit, however, if the buyers still feel quite comfortable, another push higher could break the 77.73 area and aim for the 77.93 level, marked by the high of Sept. 3.

Alternatively, if the pair breaks the aforementioned upside line and also falls below the 75.80 hurdle, marked by the low of Nov. 20, that may spook the remaining bulls from the field, allowing more bears to join in. AUD/JPY might then travel to the 75.40 area, marked by the low of last week, which if broken could open the door for further declines. That’s when we may aim for the 74.90 level, which is the low of Nov. 6.

The US will show its weekly crude oil number. Currently the expectation is for the number to decline again, going from 0.768m to 0.127m barrels. If the actual number comes out as forecasted, or lower, this could prove to be positive the price of . 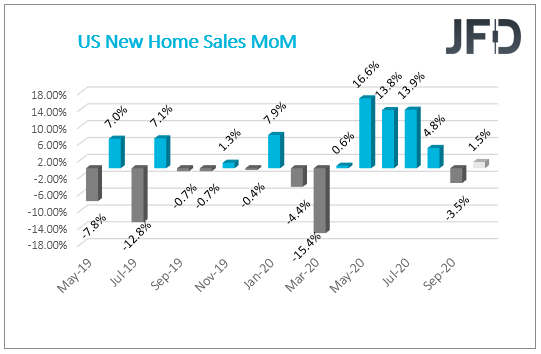