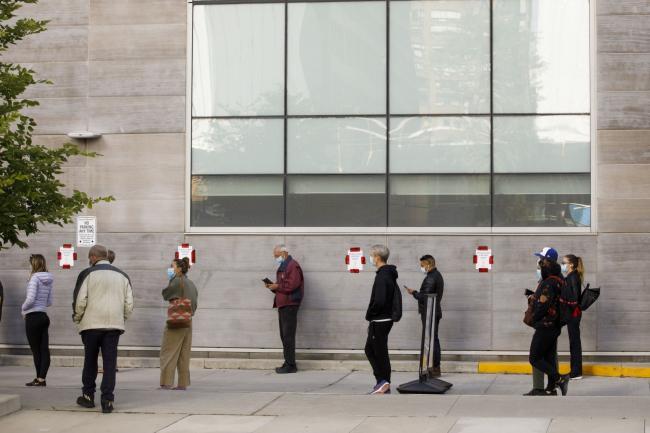 Only 12.9% of respondents believe the country’s economy will strengthen in the next six months, the smallest share since early May, telephone polling shows. That left the Bloomberg Nanos Canadian Confidence Index slightly lower at 51.8. The index has dropped for four straight weeks from a post-pandemic high of 53.2 late last month.

The share of respondents who see the Canadian economy weakening in the next six months rose to 56%, which means pessimists now outnumber optimists about four to one

Weakening sentiment in Canada reflects the new containment measures provinces like Quebec and Ontario have imposed to dampen the second wave of Covid-19. The new lockdown measures include closures of bars, restaurants and gyms as well as limiting the number of people in social gatherings.

As of Sunday, the number of active Covid-19 cases in Canada had more than doubled in the past month to 24,177.

Every week, Nanos Research surveys 250 Canadians for their views on personal finances, job security and their outlook for the economy and real estate prices. Bloomberg publishes four-week rolling averages of the 1,000 responses.

In addition to the Nanos numbers, the impacts of the new restrictions are showing up in high-frequency indicators. Restaurant demand dropped after indoor dining was been banned in several large cities and even outdoor dining was prohibited in parts of Quebec for 28 days, allowing only takeout.

Credit-card spending growth slowed in October after the new measures were implemented, according to reports from Bank of Nova Scotia and Toronto-Dominion Bank. The spending weakness is concentrated among restaurant, travel and entertainment merchants.