Election 2020: Key Outstanding States To Watch And What The Market Reaction Means


As we noted in our Election Night Live Blog, we were never likely to get a clear answer on who won the US Presidential Election right after the polls closed, but the results have proven even tighter than forecast as we await final counts on a few more key swing states. Regardless of the final result, it’s clear that the United States is anything but united, and whoever is ultimately declared the winner will have a difficult time bringing together a deeply divided nation.

North Carolina is likely to go to Trump, even if it hasn’t been made official yet. The President has 50% of the vote (vs. 49% for Biden) with just 5% left outstanding, but the outstanding votes are from more liberal areas of the state and votes can be accepted until 12 November, so we may not get a clear answer from the Tarheel State this week.

Georgia was perhaps yesterday’s biggest surprise, with the long-time Red state seeing a late break comeback by the Democrats. As it stands, Trump still leads 50.5%-48.3%, but the majority of the outstanding vote is from the liberal Atlanta suburbs, so Biden conceivably has a path to pull out a narrow victory. These votes may take a day or two to fully tally, but a press conference is expected later this morning so we may still yet get a result today.

Arizona has already been declared for Biden by some networks (AP and FOX), though others are exercising an abundance of caution. Biden will need to secure this state to have a “Plan B” if Pennsylvania (see below) goes for Trump.

Nevada has unexpectedly become a key state. Biden leads 49.3% to 48.7% over Trump with 87% of the vote counted, but no more results are expected until Thursday.

Pennsylvania, the biggest prize of the whole election, remains the most up-in-the-air race. The President technically leads by nearly 10 points as of writing, but the outstanding vote is likely to be overwhelmingly Democratic, so this one will almost certainly go down to the wire. We’re likely to be watching the results trickle in from the Keystone State for the rest of the week.

Taking a step back, the best chance we have of getting a “clear” (pending litigation) winner would be if Arizona, and either Georgia or Nevada are called for Biden in the next 24 hours or so. Barring that scenario, we may all be on tenterhooks watching Pennsylvania, which is a must-win state for Trump, through Friday.

Meanwhile, control of the Senate is likely to come down to just one or two Senators…though not for a number of weeks. Democrats picked up seats in Colorado and Arizona, but failed to gain any ground in Iowa, Texas, or Montana. Both Senate races in Georgia could go to drawn-out special elections which would be held on (checks notes) 5 January 2021! If these races wind up deciding control of the Senate, they’ll be watched nearly as closely as Tuesday’s election was. In any event, the strong Democratic majority that would have been required to make dramatic changes (an extensive “Green New Deal”, “Packing” the Supreme Court, eliminating filibusters, etc) is unlikely to emerge.

Traders were generally upbeat on Wednesday, even with the final outcome still up in the air. US indices, led by the tech-heavy , surged in early trade and closed up 3.85%, as was (+2.2% on the day). Bucking the otherwise “risk on” reaction, the benchmark Treasury yield hit new lows at 0.77% in a sign that bond traders may be wary of a contentious, heavily-litigated outcome in the coming weeks.

In FX land, the reactions have been relatively subdued, with the sitting in the middle of yesterday’s relative performance chart, while the brought up the rear and the led the pack. With the likelihood for narrow margins in the Presidential and Senatorial races, FX traders may be hinting that we’re likely to see at least two more years of the same divided government (limiting the progress for major tax/spending overhauls) and aggressive stimulus from the Federal Reserve. Traders will now shift their focus to today’s as the next potential driver for the greenback. 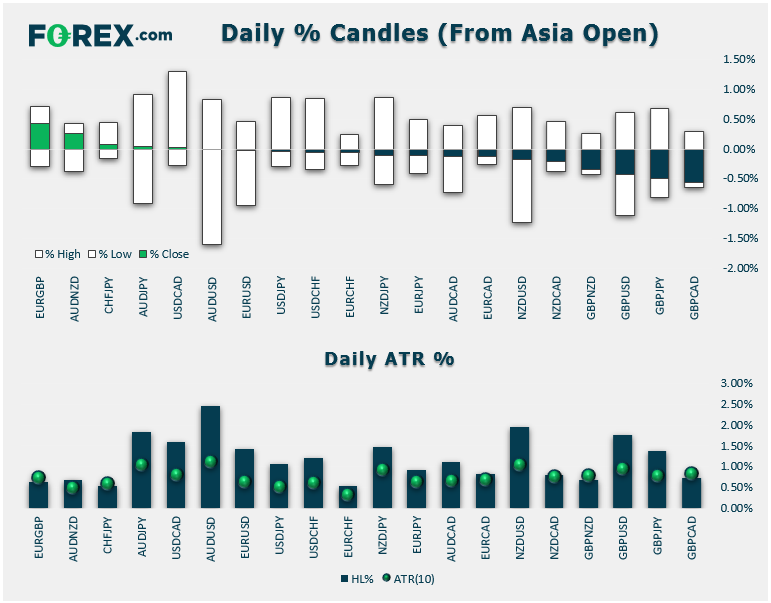