suffered at the hands of the bear market in the latter half of 2018, after its mainnet launch in June. The decentralized application (dApp) based platform saw an 85 percent pullback, hitting a new 2018 low of $1.60 at the beginning of December.

EOS started to bounce back a bit, just before the new year came in. At the time of writing EOS is trading for $4.42—up more than 90 percent in February alone. This has pushed EOS to the rank fourth position, with a total market cap of $3.9 billion.

It appears that EOS has confidently broken out of the downtrend that it has been under since finally tipping over at the end of April 2018. Historically, the $5 level has acted as strong psychological support but could make for a tough resistance trying to get back over. The last time EOS was over $5 was Nov 14 of last year. 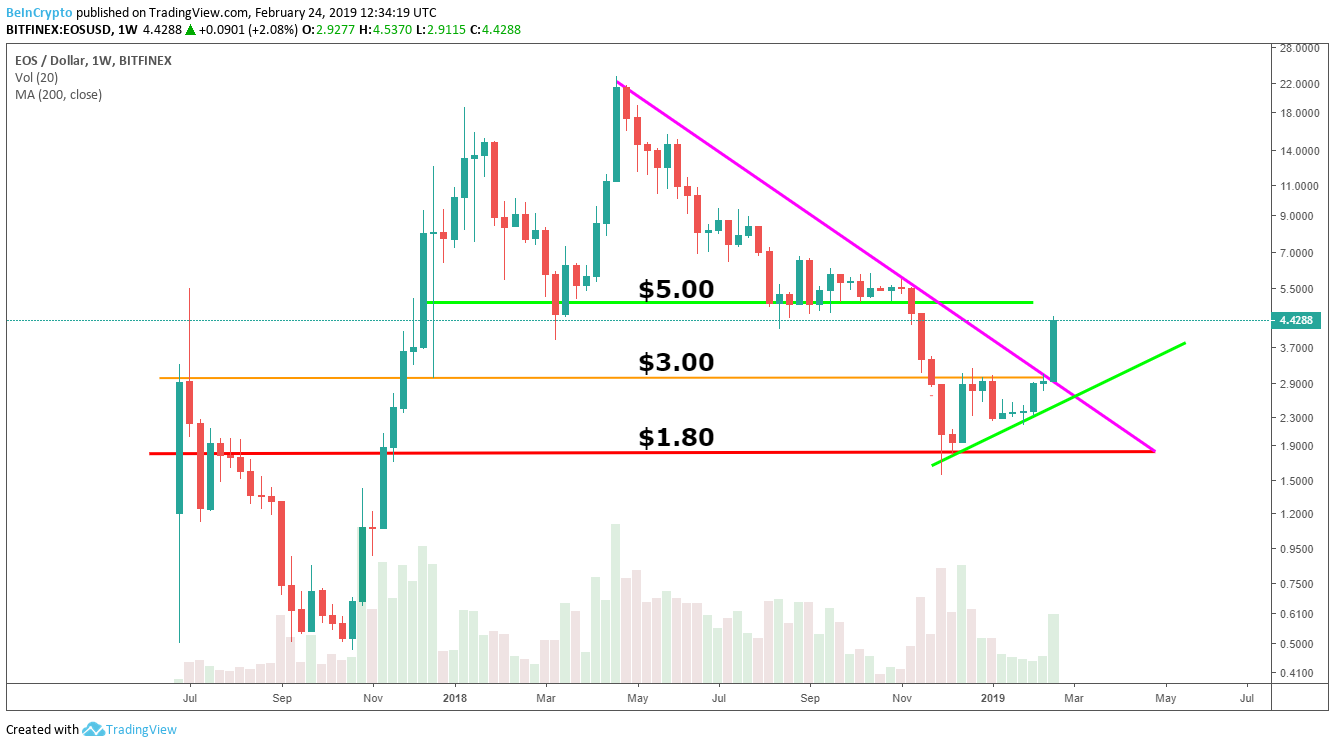 Taking a look at the relative strength index (RSI), EOS has crossed into overbought territory at a value of 80. If EOS was to turn back around, the first target would be the 200-day moving average in the neighborhood of $3.75.

In the past, the highest RSI that EOS has ever reached was 90, first in December of 2017 during the market bull run, and again the following April in the lead up to the launch of the EOS blockchain. If EOS completes this pattern a third time, it could have the power to finally push back over the $5 mark in the near future. 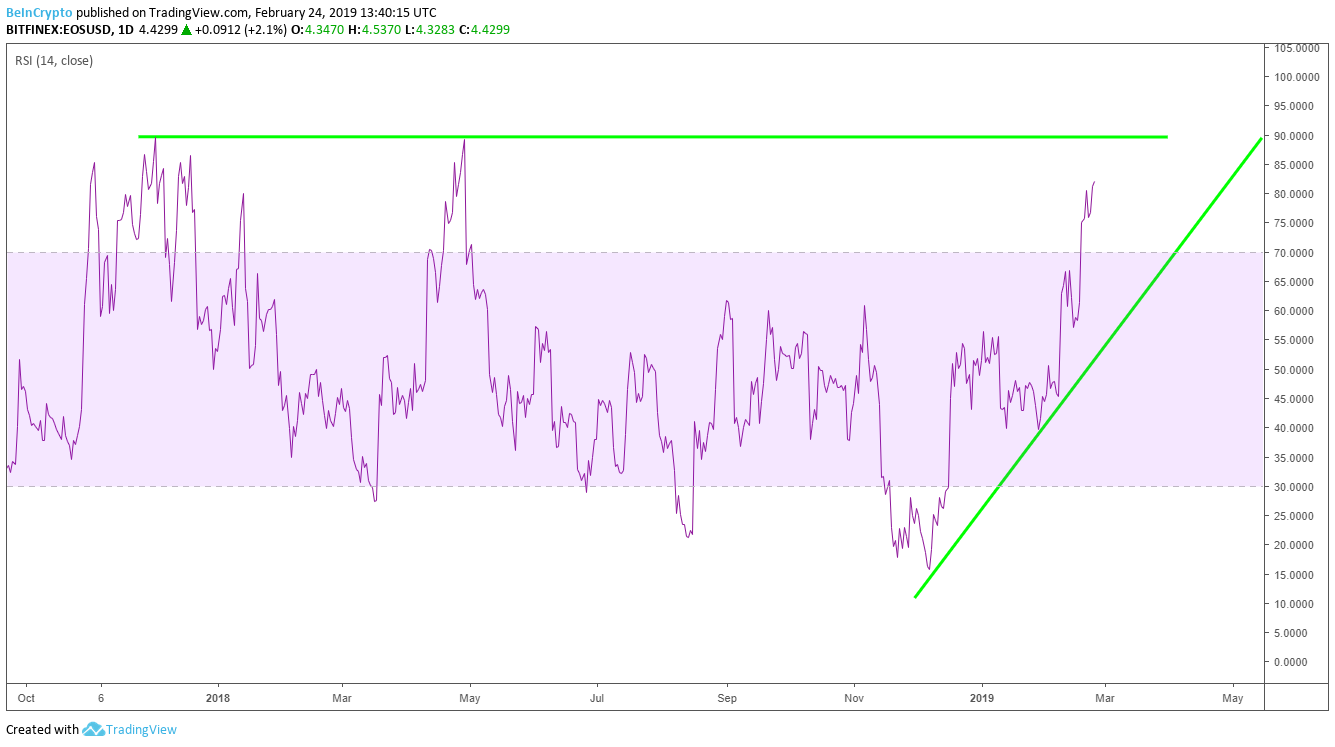 The chart shows an ascending trend which recently broke above the 0.00082 EOS/BTC support. At the time of writing {{1057391|Bitcoin},} (BTC) and EOS have begun to show signs of faltering which mean that the latest market pump was just a bull trap.

Traders looking to enter positions should be cautious and may want to wait for any dust to settle before making a move. If this does, in fact, turn out to be a false breakout, EOS could easily fall back to 0.00082 EOS/BTC, or possibly back to the ascending trend line at 0.000765 EOS/BTC.

If BTC slips back significantly in the next few days, it could cause EOS to suffer the same fate and bringing it back under the long term descending trend line. If this happens, there is the danger of retesting the 2018 low of 0.0005 EOS/BTC. 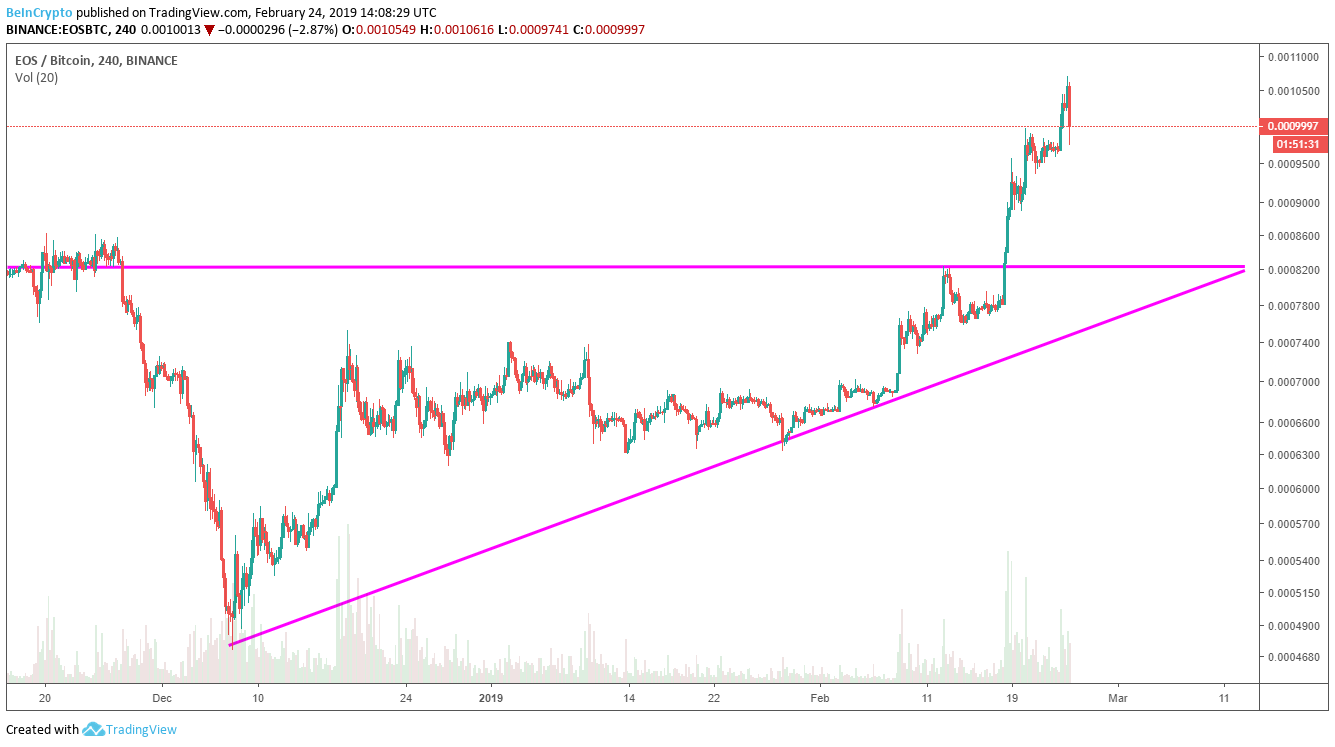 [Disclaimer: The contents of this article are not intended as financial advice, and should not be taken as such. BeInCrypto and the author are not responsible for any financial gains or losses made after reading this article. Readers are always encouraged to do their own research before investing in cryptocurrency, as the market is particularly volatile. The author of this article does hold some EOS.]