Market sentiment turned to risk off during the US session yesterday, despite news that the vaccine developed by Pfizer and BioNTech has now a 95% success rate. It seems that investors were more worried over the accelerating infections by the pandemic. Despite the switch in appetite, the US dollar remained on the soft side, perhaps due to increased expectations over more easing by the Fed at its December gathering.

Markets Switch To Risk Off, But USD Stays Under Pressure

The US continued trading lower against the majority of the other G10 currencies on Wednesday and during the Asian morning Thursday. It gained only against , and CHF, while it was found virtually unchanged versus . The greenback lost the most ground versus , JPY and . 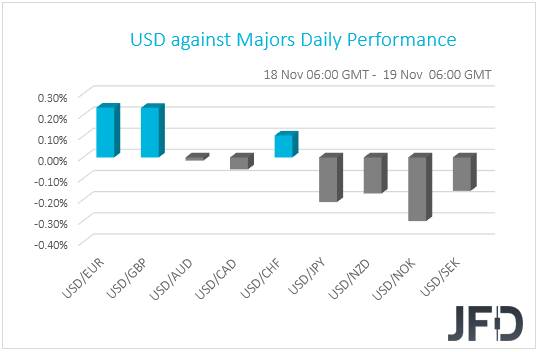 The weakening of the US dollar and the suggests a risk-on trading. However, the strengthening of the Japanese yen points otherwise. Thus, in order to get a clearer picture with regards to the broader market sentiment, we prefer to turn our gaze to the equity world. There major EU indices were a sea of green, perhaps boosted news that Pfizerand BioNTech revealed a 95% success rate at the conclusion of their latest COVID-19 vaccine trial, just a few days after Moderna announced a similar success rate.

That said, the joy did not last for long. US indices slid, losing on average 1.05% each, perhaps due to another day of accelerating infections from the pandemic. The negative investor morale rolled over somewhat into the Asian session today as well. Although China’s is currently up 0.47%, Japan’s and Hong Kong’s are down 0.36% and 0.48%, while South Korea’s is virtually unchanged. 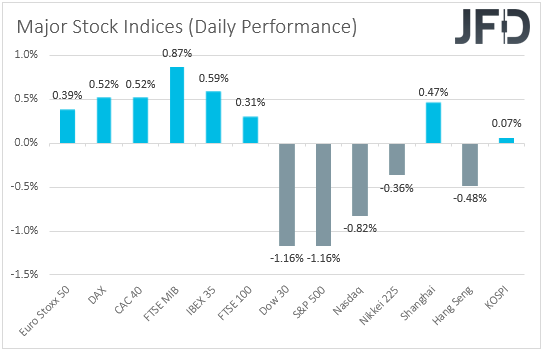 It seems that market participants are confused. They don’t know where to place more emphasis; on the positive vaccine headlines, or on the acceleration of the infections from the pandemic? As we noted several times in the recent past, the covid-era is not behind us yet, and we may experience several more months of rising infections and economic slowdown.

However, the upbeat developments with regards to the vaccine suggest that the end of this crisis is approaching. Therefore, we stick to our guns that any declines in risk-linked assets are likely to stay limited. We would treat them as corrective moves within the broader uptrend, which we expect to eventually resume.

Now back to the currencies, the US dollar continued to suffer, even after markets switched to a risk-off mode. It seems that besides safe-haven flows, there are more forces driving the greenback and one of them may be increasing expectations over fresh easing actions by the Fed at the December gathering. Yesterday, New York Fed President John said said that with no fiscal support, the economy could slow in the coming months, while Richmond Fed President Thomas noted that there may be one smaller targeted stimulus.

With the US government and Congress Democrats not reaching consensus over a new fiscal aid, those comments may have added to the chances for the Fed taking action. Thus, with that in mind, the US dollar is likely to underperform the other safe-havens, even during periods of market euphoria. In other words, we see the case for USD/JPY and to trade lower in the short run.

The technical picture of the index on our daily chart shows that after a strong rally seen in the first two weeks of November, the price had stalled near the 6464 hurdle and retraced back down. The price may continue drifting a bit further south, however, this move lower might still be seen as a corrective one, if the price stays somewhere above the 200-day EMA. For now, we will take a somewhat bullish approach.

As mentioned above, the index may continue correcting a bit more to the downside, but if it gets held somewhere near the 6175 hurdle, marked by the high of Aug. 25, or the previously discussed 200-day EMA, that might attract the bulls back into the game. This could help FTSE 100 rise back to the current highest point of this week, at 6464, which may temporarily hold the up move. That said, if the buyers are still feeling confident, a break off that resistance area might clear the way towards the 6513 barrier, marked by the highest point of June, or to the 6598 level, which marks the inside swing lows of Mar. 3 and 5.

Alternatively, if the price suddenly slides below that 200-day EMA and then also drops below the 6125 zone, marked by the high of Sept. 15, this could open the way for a larger correction lower. We will then aim for the highest point of October, at 6041, which could provide a temporary hold-up. However, if the selling doesn’t end there, the next potential targets could be the 5961 and 5867 levels. Those levels mark the highs of Oct. 19 and 26 respectively.

continues to drift lower, while trading below a short-term tentative downside resistance line taken from the high of Nov. 11. Although we are currently seeing slight choppiness in the movement, as long as the rate remains below that downside line, we will continue aiming lower. However, to get a bit more confident in that idea, a drop below the current low of this week would be needed.

If the pair does go ahead with the scenario of sliding below the current low of this week, at 103.65, that would confirm a forthcoming lower low and could send USD/JPY to some lower areas. One of the first good support levels might be seen near an intraday swing high of Nov. 6, at 103.37. The decline may slowdown around there, however, if the sellers are still in charge, they could eventually overcome that zone and aim for the current lowest point of November, at 103.17.

On the other hand, if the rate somehow manages to break the aforementioned downside line and then jump over the 104.10 barrier, marked by yesterday’s intraday swing high, that might spook the bears from the field temporarily. More bulls may run into the field and lift the pair to the 104.36 obstacle, which is the low of Nov. 16. If the buying action doesn’t stop there, the next potential target could be at 104.72, marked by an intraday swing high of Nov. 16.

As For Today’s Events

Today, an EU summit is scheduled to begin, and it will be interesting to see whether the EU and the UK are getting closer in reaching consensus over trade as early as next week, as UK chief Brexit negotiator David Frost suggested.

As for the data, we get the US for last week, expectations over which are for a minor slide to 707k from 709k. The Philly Fed for November and the for October are also due to be released.

Tonight, during the Asian morning Friday, Japan’s National CPIs for October are coming out. The rate is forecast to have slid to -0.3% yoy from 0.0%, while the one is expected to have fallen to -0.7% yoy from -0.3%.

Australia’s preliminary for October are also due to be released and the forecast points to a 1.5% mom decline following a 1.1% slide in September.

Facebook
Twitter
Pinterest
WhatsApp
Previous articleEUR/USD: Bear Trending Trading Range Day
Next articleThai music festival to use its own token for a cashless event By Cointelegraph