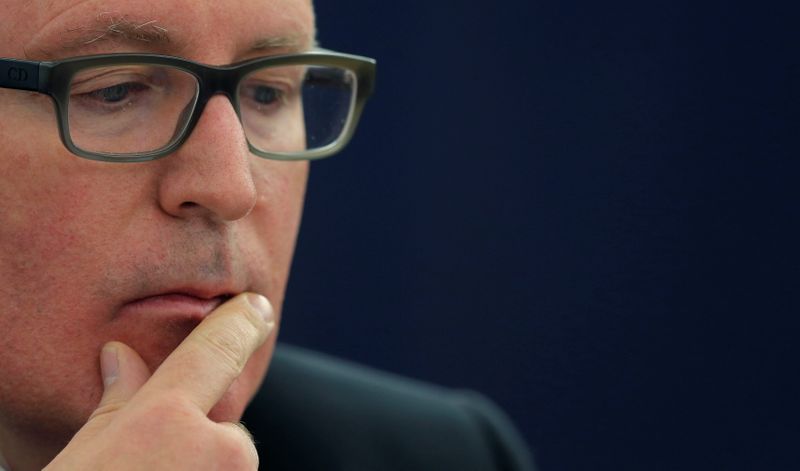 © Reuters. FILE PHOTO: European Commission First Vice-President Frans Timmermans addresses the European Parliament in Strasbourg, France, during a debate on the state of the rule of law and restrictions to press freedom in Poland, January 19, 2016. REUTERS/Vincent

The Commission on Wednesday proposed 13 legislative proposals, its biggest climate package yet, to cut planet-warming emissions.

The measures include what amounts to a ban on fossil fuel car sales from 2035 and, most divisively of all, an expansion of the scope of the bloc’s carbon market, which places a charge on pollution.

Some EU countries and lawmakers have said the plan to impose carbon emissions costs on fuel suppliers in the transport and buildings sector would hurt the poorest EU citizens by raising their fuel bills.

Timmermans on Thursday brushed aside media reports opposition was also fierce within the Commission, the EU’s executive, during its hours-long final discussions on Wednesday before the official announcement of the proposals.

“Sometimes it gets hot in the kitchen. But it’s the meal that you serve up that citizens are interested in at the end of the day, not how you cooked it,” Timmermans told a news conference on Thursday.

The European Commission comprises 27 commissioners, one to represent each of the member states.

“There will still be a few days of animosity within that bubble. It’s always like that. I’ve never known anything else in all the years that I’ve been working in this institution,” Timmermans said.

Previous EU climate policy, especially involving the carbon market, has involved months or even years of haggling as countries that rely on coal and polluting industries have sought to protect their economies from added costs.

A Polish official, speaking on condition of anonymity, said Poland was unhappy with the new carbon market plan.

“We have very serious doubts about the legitimacy and effectiveness of setting up a separate new emissions trading system for road transport and buildings,” the official said.

All of the EU climate proposals must be approved by a majority of EU countries and European Parliament, which could take two years.

The discussions are likely to expose familiar fault lines between the EU’s richer states, and poorer central and eastern European countries worried about the social cost of the proposed climate reforms.

To try to cushion the impact, the Commission proposed that some revenues raised by the buildings and transport carbon market should form a fund to help low-income households – for example, by paying for insulation or other home renovations that would cut their fuel bills. Oil Down but Moves Small as Gulf of Mexico Recovery from Ida Remains Slow By Investing.com