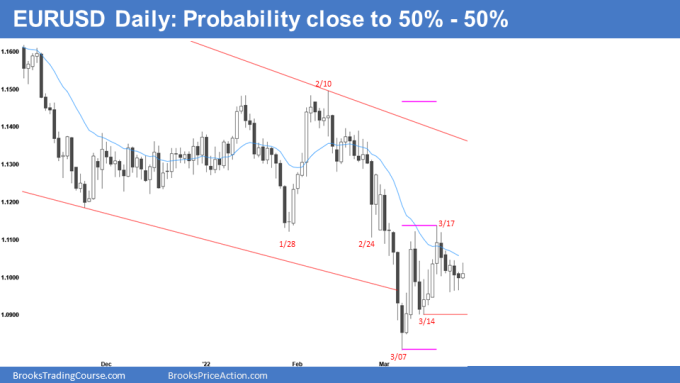 – is still deciding between a bull breakout of the bear flag or a double top selloff back to the March low.

– Currently, the market is around the midpoint of the March trading range, which means the market is in breakout mode, and the probabilities are close to 50% for both bull and bears.

– Right now, the odds favor the bulls getting their bull breakout above the bull flag (probability is not 60%, though). This is because the market broke below a bear channel, so the market will have to test the top of the bear channel.

– While the bears have a double top with March 21 being the signal bar, it is possible that those bears may give up quickly.

– The past three days have been weak follow-through for the bears, which will likely cause more and more bears to give up. This means that there is potential for a bull breakout that reaches the March 21 high in the next few trading days.

– The bears need to get a strong bear close soon to convince traders to sell more betting on the double top.

– Overall, sideways is most likely over the next few trading days.