The initial reaction to the ECB interest rate decision dragged on the Euro as the central bank stays on track to carry out “a moderately lower pace of net asset purchases under the pandemic emergency purchase programme (PEPP) than in the second and third quarters of this year,” but the decline was short-lived, with EUR/USD bouncing back from the session low (1.1582) as President Christine Lagarde and Co. “foresee inflation rising further in the near term.”

It seems as though the ECB will draw up an exit strategy over the coming months as the central bank anticipates Euro Area “output to exceed its pre-pandemic level by the end of the year,” and a growing number of Governing Council officials may show a greater willingness to draw down the emergency measures as “the current phase of higher inflation will last longer than originally expected.”

As a result, signs of sticky price growth may put pressure on ECB to switch gears as “inflation will take longer to decline than previously expected,” and EUR/USD may continue to appreciate ahead of the Federal Reserve interest rate decision on November 3 as the US Gross Domestic Product (GDP) report points to a less robust recovery.

In turn, EUR/USD may continue to retrace the decline from the September high (1.1909) as mixed data prints coming out of the US economy undermines speculation for an imminent shift in Fed policy, but a further advance in the exchange rate may continue to alleviate the tilt in retail sentiment like the behavior seen earlier this year. 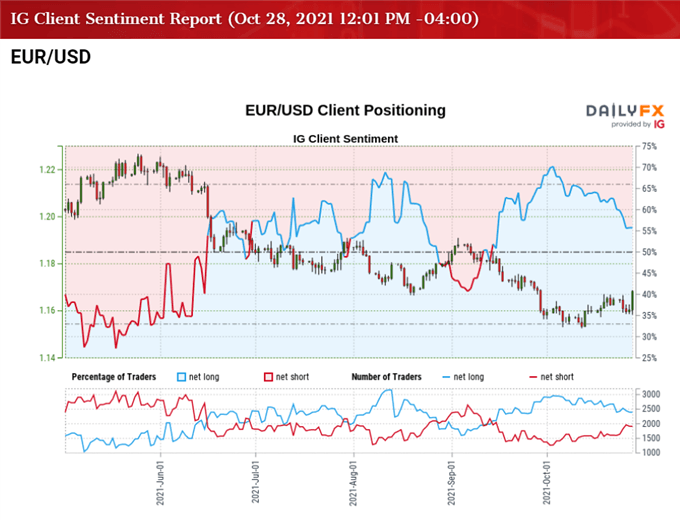 The IG Client Sentiment report shows 54.29% of traders are currently net-long EUR/USD, with the ratio of traders long to short standing at 1.19 to 1.

The number of traders net-long is 4.00% lower than yesterday and 16.24% lower from last week, while the number of traders net-short is 12.56% lower than yesterday and 9.11% higher from last week. The decline in net-long position could be a function of profit-taking behavior as EUR/USD trades to a fresh monthly high (1.1692), while the rise in net-short interest has helped to alleviate the tilt in retail sentiment as 57.75% of traders were net-long the pair ahead of the ECB meeting.

With that said, EUR/USD may stage a larger advance over the coming days as it marks the largest one-day rally since May, but the rebound from the monthly low (1.1525) may turn out to be a correction in the broader trend as the exchange rate trades to fresh yearly lows in the second half of 2021.