Euro Rallies On Lagarde’s Remarks, Eurozone CPIs Under The Limelight


The gained decently yesterday following the European Central Bank’s (ECB) , as President Lagarde noted that inflation could stay elevated longer than previously thought. Despite Lagarde trying to push back expectations over a rate increase next year, market participants stayed adamant that high inflation could indeed lead to earlier hikes.

Today, Eurozone’s preliminary are coming out, and further acceleration could strengthen investors’ opinions.

The traded lower against all but one of the other G10 currencies on Thursday and during the Asian session Friday. It lost the most ground versus , , , and EUR, while it gained slightly only against . 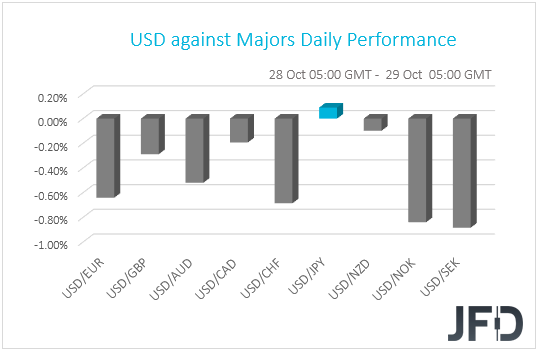 The greenback and yen’s weakening suggests that markets traded in a risk-on manner yesterday. But, the strengthening of the franc says otherwise. Therefore, to get a clearer picture regarding the broader market sentiment, we prefer to turn our gaze to the equity world.

There, all but two of the major EU and US indices traded in the green, with the exceptions being Germany’s and the UK . That said, the appetite softened during the Asian session today. Although Japan’s and China’s gained, Hong Kong’s and South Korea’s fell. 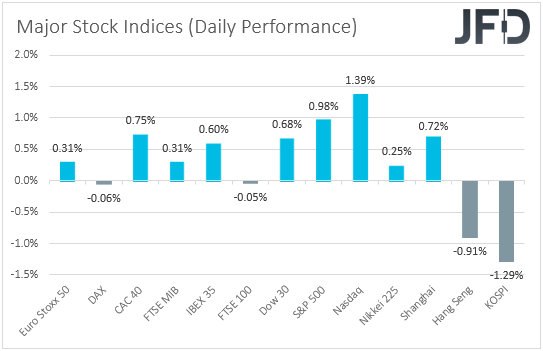 It seems that better than expected earnings remained the main driver behind the equity markets yesterday, despite the economic agenda including an ECB decision.

European stocks were buoyed by food and technology stocks, with beer brewer Anheuser Busch Inbev (NYSE:) surging after a surprise rise in , and French IT services provider Capgemini (OTC:) adding 6.0% on and outlook.

Later, in the US, the and the hit fresh record highs. They were partly aided by gains in tech giants (NASDAQ:) and (NASDAQ:), who reported earnings after the closing bell along side from Caterpillar (NYSE:) and  (NYSE:).

Having said that, though, both Apple and Amazon slid after hours due to investors’ disappointment after their earnings announcements.

As we already noted yesterday, we had an ECB monetary policy decision. The Bank kept its policy settings unchanged as was widely anticipated, while there was no material change in the accompanying statement.

However, at the press conference following the decision, ECB President highlighted that although the surge in inflation is still expected to be temporary, it could last longer than previously expected.

She said that, in her view, Pandemic Emergency Purchase Program (PEPP) would end in March, but we believe that a more formal announcement on that may come in December. Nonetheless, she added,

“Our analysis certainly does not support that the conditions of our forward guidance are satisfied at the time of liftoff as expected by markets, nor any time soon after that.”

Having said all that, it seems that she failed to do so, and this is evident by the spike in the . The currency gained more than 100 pips against the US dollar during the press conference.

Perhaps market participants focused more on the comment that inflation could stay elevated more than previously thought and judged that this will eventually force Lagarde and her colleagues to push the hike button earlier than they anticipated.

Today, euro-traders will turn their attention to Eurozone’s preliminary CPIs for October. The headline rate is expected to have risen to +3.7% YoY from +3.4%, while the is forecast to have stayed unchanged at 1.9%, just a tick below the ECB’s objective of 2%.

In our view,  inflation could stay elevated for longer than previously thought and may encourage euro-traders to add to bets regarding an earlier rate hike. This could keep the euro supported for a while more, especially against the yen.

Amid rising bond yields around the globe, the Bank of Japan (BoJ) is keeping a lid on its government bond yields. However, we are reluctant to call for a long-lasting recovery against the US dollar, and the , as both the Fed and the Bank of England (BoE) meet next week.

Market participants remain eager to determine whether the Fed will taper and signal that interest rate hikes could take place next year and whether the BoE will push the hike button at that gathering or at least before year-end.

The pair spiked higher yesterday after it hit support at 131.55. The rate emerged above the 132.15 zone but hit resistance slightly below 132.95.

In our view, yesterday’s spike may have brought an end to the downside correction started on Oct. 20, but to get confident on more considerable advances, we would like to see a clear move above 132.95.

Such a break could encourage the bulls to aim for the high of Oct. 20, at 133.48, the break of which would confirm a forthcoming higher high and perhaps carry more significant bullish implications, paving the way towards the peak of Jun. 1, at around 134.12.

On the downside, we would like to see a healthy dip below 131.30, support marked by the inside swing high of Oct. 12, before we start examining whether the bears have regained complete control.

If neither barrier can halt the slide, we may experience extensions towards the round number of 130.00, near the inside swing high of Sept. 30.

We believe that market participants could soon challenge the peak of Sept. 6, at around 4250. The break of which would take the index into territories last seen in January 2008. The next stop may be at 4300, the break of which could pave the way towards the next psychological zone near 4350.

The move that would make us start assessing whether the bears have gained complete control again is a dip below 4100, a barrier marked by the inside swing high of Oct. 8.

As for the Rest of Today’s Events

In the US, personal income and spending for September are coming out, alongside the core PCE index for the month, while we have the monthly GDP for August from Canada.

could decline somewhat, while could increase, but at a slower pace than August.

The Fed’s favorite inflation metric, the , is forecast to tick up to +3.7% YoY from +3.6%, something that could add more cement to the case of a tapering start by the Fed at next week’s gathering.